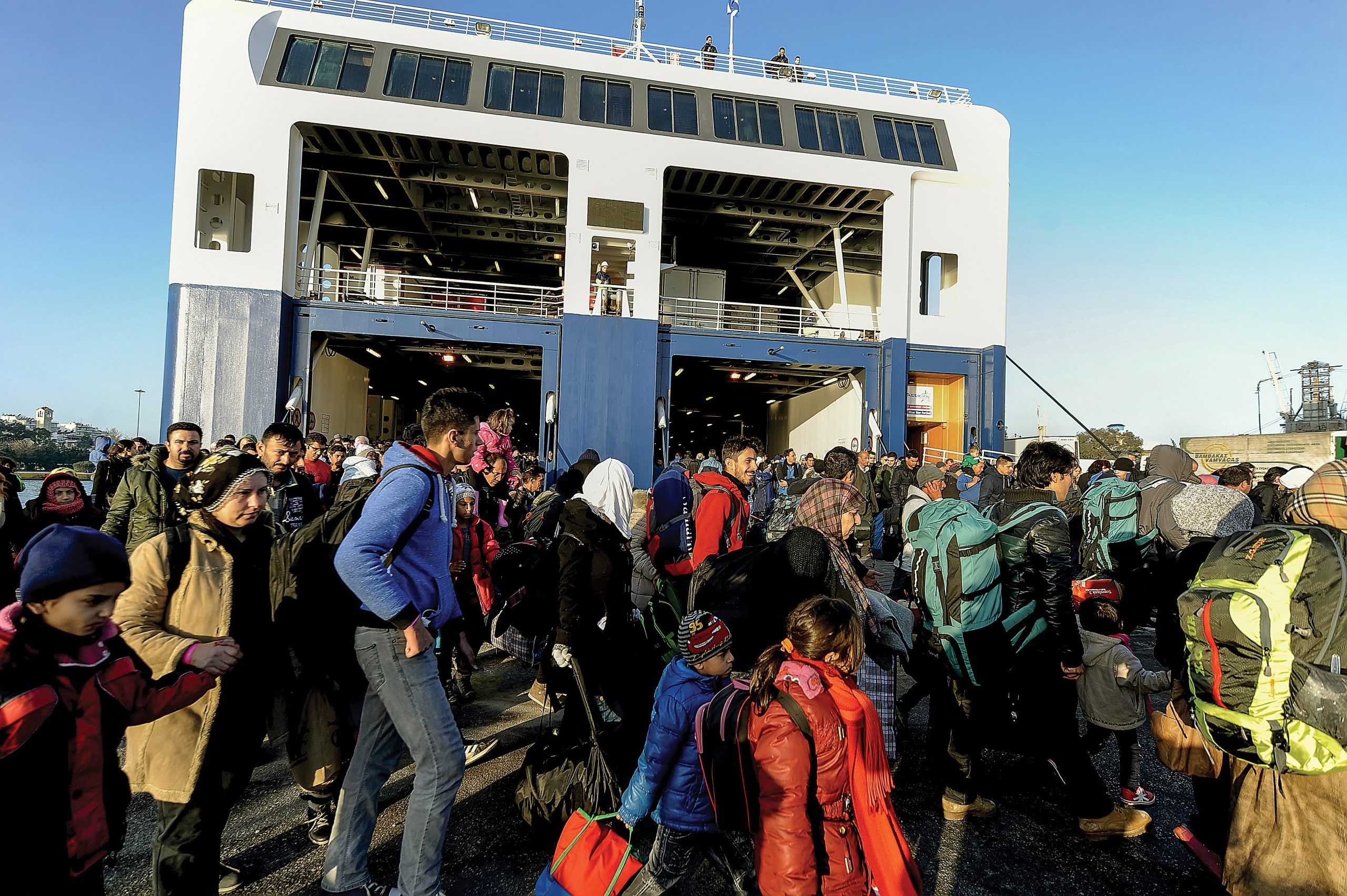 There is now strong evidence that the Muslim migrant crisis affecting Europe is 35 times worse than previously estimated.

The Daily Mail reported that 2,000 Muslim migrants a day were arriving in Greece despite the perilous winter seas. “The UN’s refugee agency show that 58,547 entered Europe via Greece in January, compared with 1,694 a year ago.”

It also reported that deaths at sea are increasing at an “alarming rate”, according to the International Organisation for Migration, with 218 people drowned in the first four weeks of 2016, four times the deaths between January and mid-August 2015.  (2 February 2016)

Greece is “swamped” with migrants, according to a Greek Christian living in London who visits Greece regularly. Migrants are not only on the islands but are “filling” Athens. Kind-hearted Greeks were, she said, doing what they could to help mothers and children, but the Greeks themselves have very little to share due to their nation’s dire financial state.

Angela Merkel’s suicidal open-door policy has triggered a massive Muslim stampede for Europe, making the migrant crisis even worse and increasing the likelihood that many more migrants and their children will die, because a much larger number of migrants are now attempting the dangerous crossings to Europe.

I have 26 years’ experience of campaigning for persecuted Christians worldwide, most of whom live in Muslim countries, and can say with certainty that unless we are keen to live under Islamic domination, we really do urgently need to hold our political leaders to account for their gross failure to stem the huge tide of Muslim migrants now flooding into Europe which will only be exacerbated if they support Turkey’s EU membership.

Most of the migrants entering Europe come through Turkey so that country has a crucial role in helping to resolve this problem. But Turkey wants so much in return. In October 2015 Turkey’s President told EU leaders that he would use the current migrant crisis to “try to force Turkey’s entry into the EU”, the Daily Express reported (8 March 2016). He said that if the EU wanted co-operation with Turkey on the migrant crisis, nothing short of full EU membership would do.

Turkey has about 75 million people, 97% of whom are Muslims. An estimated 19 million Turks live in poverty and they would probably be the first to move to Western Europe if Turkey obtains EU membership. Under EU rules, with its open borders, Turks would be free to migrate to the UK as full EU citizens.

Writing for The Express, Ross Clark commented that Turkey’s EU membership “would set off a flood of migration that would make the existing stream look like a trickle.” He added that Turkey has become increasingly Islamic, with Sharia law “creeping back into Turkish life”.

David Cameron told the Turkish Parliament in 2010 that he would be “fighting for” them to join the EU and there is no evidence that he has changed his mind.

The compassionate solution is for our government to put strong pressure on the Islamic world to take in the Muslim migrants, instead of assuming that it’s just the West’s problem.

There have been extensive sex attacks by Muslim migrants on women and children in Germany and other European countries and we should learn from that. Especially since we already have a long-running problem of Muslim gangs sexually assaulting children in the Midlands and northern England, including for example, Rotherham, where Muslim gangs sexually assaulted 1,400 non-Muslim children over a 16-year period.

One of Poland’s most popular weekly magazines has splashed a graphic depiction of the rape of Europe’s women by Muslim migrants on its front cover. The latest Wsieci (The Network) magazine featured a white, female personification of Europa being pawed at by dark hands — with the headline decrying the “Islamic Rape of Europe”. (Breitbart News, 17 February)

Journalist Aleksandra Rybinska wrote: “The people of old Europe after the events of New Year’s Eve in Cologne painfully realised the problems arising from the massive influx of immigrants.The first signs that things were going wrong, however, were there a lot earlier. They were still ignored or were minimised in significance in the name of tolerance and political correctness.”

Outlining the fundamental differences between eastern Islam and western Christianity, the editorial explained that these two worlds have been at war “over the last 14 centuries” and now they are clashing in Europe. This clash is brought by Muslims who come to Europe and “carry conflict with the Western world as part of their collective consciousness”.

The collapse of the West in the face of this “Islamic rape” was not inevitable though, as Rybinska quoted British historian Arnold Toynbee: “Civilisations die from suicide, not by murder”.

Underlining the element of choice Europe has had in accepting the migrant crisis, the article cites the early signs of extreme violence perpetrated by migrants. Recalling an asylum centre riot in Germany in August where inmates rioted because of a dispute over the Koran and attacked police officers while screaming “Allahu Akhbar”, Ms Rybinska also recounted the fates of Christian asylum seekers  beaten by their Muslim counterparts.

The article lists dozes of recorded sex attacks from the past few weeks, often visited upon under-age Europeans.

Sweden is now called the “rape capital of Europe.”

Swedish Public Radio released a report showing that in the first seven months of 2013, over 1,000 Swedish women reported being raped by Muslim immigrants, an increase of 16 per cent on 2012. Worse, more than 300 of the reporting victims were actually young girls under the age of 15.

As a feature begging the question, “Does Europe want to commit suicide?” concludes, “There is concern that European leaders have too late drawn the obvious conclusions, and some of them feel self-loathing”.

“Europe is an oasis of prosperity and peace” compared to Africa and the Middle East, it contends, but the arrival of “millions” of cultural Muslims will “shock and undermine Europe”. The article blames Angela Merkel for this predicament.

Getting out of the European Union as soon as possible will greatly help to protect Britain’s borders from much of the massive influx of Muslim migrants.

We should carefully consider the profound impact that the mass Muslim migration into Europe will have on our way of life, our freedoms, on the safety of the Christian and Jewish communities, and on the welfare of women and children.

Even the Archbishop of Canterbury commented in March that it is not racist to be concerned about the numbers of migrants wanting to live in our nation.

Both major threats to Europe, of flooding it with many millions of Muslim migrants, are being facilitated by the European Union and its freedom of travel between EU member states. To save ourselves from this imminent catastrophe, the UK must leave the EU.

So let us use this opportunity to vote ‘out’ and encourage many others to do the same, rather than live with utter regret when we see millions of Muslim migrants flooding into the UK.

Let us also pray and hold the British Government fully accountable on these issues, and urge others to do likewise, instead of simply sleepwalking towards Islamic domination.

Write to Britain’s Prime Minister to express your concern about mass Muslim migration into Europe. I have written a letter that you can copy or use.

“We have 50 million Muslims in Europe. There are signs that Allah will grant Islam victory in Europe – without swords, without guns, without conquest – will turn it into a Muslim continent within a few decades.”