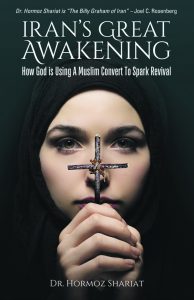 There are not many authors of Christian books who can claim to have been a Muslim on the streets of Tehran, shouting: “Death to the Shah, death to America!”

But that’s a claim that Dr Hormoz Shariat, the author of ‘Iran’s Great Awakening’ can make.

As the reign of the Shah of Persia crumbled in 1978-9, he was on the streets with his American wife, herself a convert to Islam from Christianity, shouting for the Shah’s overthrow. Little did they realise what would happen to Iran when Ayatollah Khomeini returned to rule the country.

They both, independently, came to faith in Christ

Dr Shariat shares the story of the arrest and execution of his 16-year old brother at the hands of the new Islamic government. Later he and his wife travelled to America so he could study for a doctorate in technology, where they both, independently, came to faith in Christ.

Dr Shariat is today described as the most influential Iranian evangelist in the world, although he lives in America. God gave him the vision to establish an Iranian television station that broadcasts in the Iranian language, Farsi, 24/7. He believes the Lord has challenged him to pray for one million Muslims to commit to salvation in Christ. The Iranian authorities have not taken kindly to what he is doing and there is a bounty on his head!

But this is much more than a book about his life story. It is a book about what God is doing in Iran today and what the Bible says will happen in the future.

We learn that Iran’s house church movement has created the fastest-growing Church in the world … more Muslims have come to Christ (in Iran) in the last 50 years than during the previous 14 centuries.

As you read this book, get ready to be excited at what God is doing in Iran, but also be ready to be challenged about your own calling and destiny in life.