CORBYN – GOSPEL VALUES FROM AN ATHEIST? 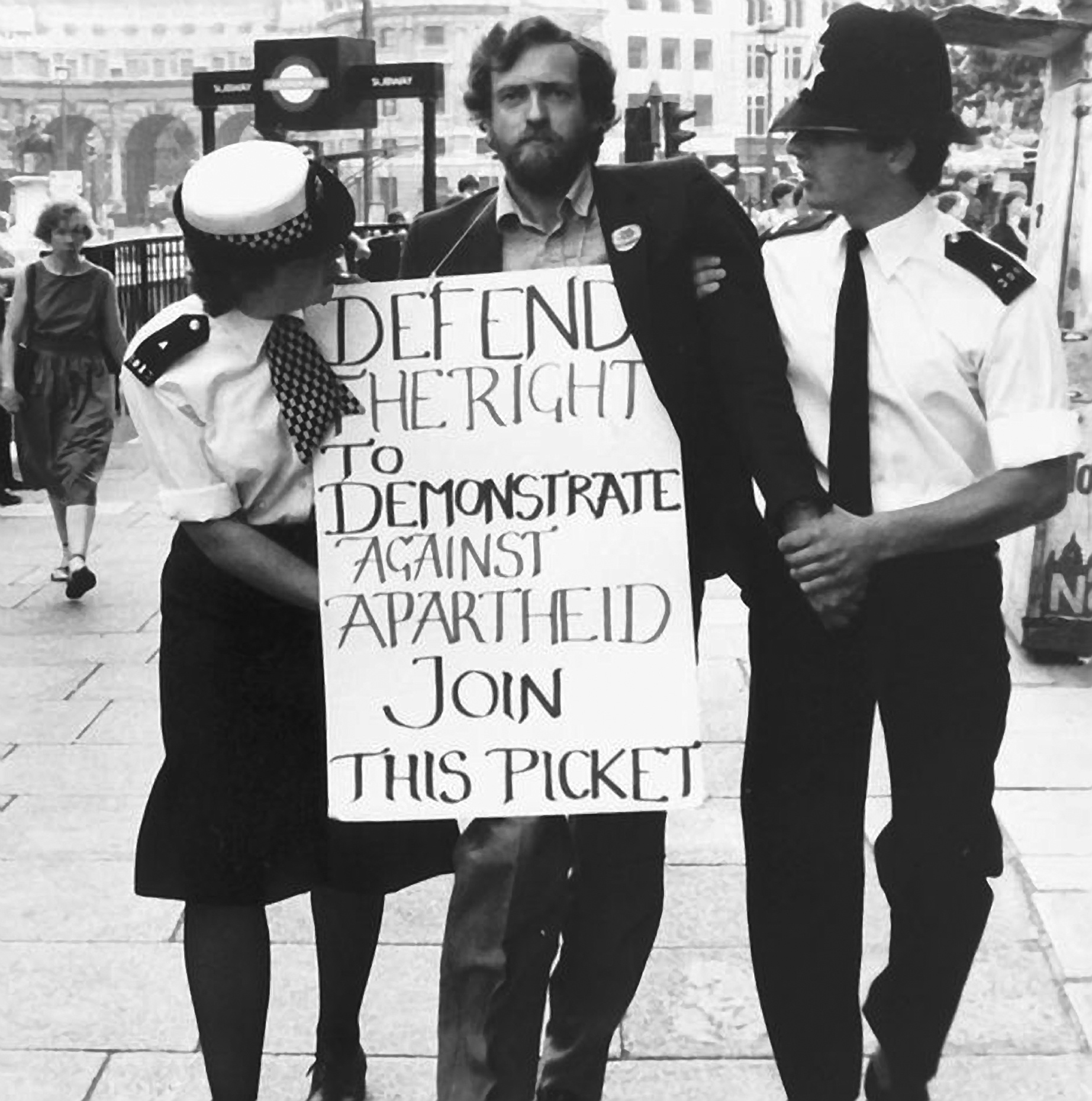 In the pinkish corner is journalist Chris Eyte, who think new Labour leader Jeremy Corbyn lives the Gospel through concern for the poor and low expense claims. In the mauveish corner is Rev Clive Hickman, UKIP candidate and champion of Judeo-Christian values, who thinks Corbyn would drive out the producers and leave England poorer.

Read what they think a Corbyn government would do for the poor, industry, the NHS and Israel’s peace prospects…

Jeremy Corbyn is not, it seems, a Christian – or if he is, his faith has not been made public. When it comes to ethical living, however, he walks the walk, not just talks it. For example, he had the lowest expenses claim than any other MP in 2009. Lower, take note, than any Christian MP. Even his constituency office is rented from the Ethical Property Company.

The new Labour leader advocates robustly defending the rights of the poor and stopping austerity welfare cuts – it is a central part of his beliefs as a socialist. Practically he wants to see higher taxes for the rich, keeping vital tax credits for poorer folk and quantitative easing [printing more money] to benefit people not banks – all commendable. All social-driven values that complement the Gospel.

Abraham Lincoln, a staunch supporter of human rights, said you do not make the poor rich by making the rich poor. Corbyn will simply drive the producers out and leave the nation more impoverished as a result. The Christian perspective is that unless a man works he does not eat (2 Thess. 3:10). Jesus said the love of money is the root of all kinds of evil. There is no teaching against earning money. The wealthy are expected to bless the poor but how can they do this if they have nothing to give because it has all been confiscated by the government?

Compare that to ‘Christians’ including PM David Cameron in Government who have slashed vital welfare funding to the most vulnerable people in society, including those with disabilities, and children. If you take away the fact that Corbyn is not an actual Christian unlike Tim Farron [Is Cameron? Is Farage?], you can nevertheless still see policies which echo the Christian way of living.

It is right to look after those who through no fault of their own need the support of government. However, it is the case that many people have chosen not to work because it is easier to live on benefits. Many on benefits have household incomes far in excess of working households.

The government is replacing the culture of benefits and the destruction generational unemployment brings with incentives to work .2 Thessalonians 3:10 would apply.

His first act after becoming Labour leader was to attend a refugee support rally and declare, “We should let people into this country who are desperate to get somewhere safe to live” – a rather different approach towards refugees, many of them Christian, than the ‘swarm’ feared by David Cameron, and the sensationalist and usual over-the-top right wing, alarmist views of Nigel Farage.

We have seen how the huge numbers of people moving into Europe consist of not just refugees but economic migrants, opportunists from as far away as Indonesia, Pakistan, Bangladesh and Afghanistan and other regions where there are no current wars.

Our security services say some are on jihad and are a security risk. The UN estimate that there are 14 million people displaced by the Syrian conflict alone.

The UN has identified 12 separate conflicts mostly involving the rise of Islam globally which suggest the numbers displaced could be in excess of 100 million. To be concerned about such numbers should be cause for alarm.

It is not just our services that will be overburdened but what about young people and workers are unable to afford homes due to scarcity and demand driven price increases?

The Bible says to grow where we are planted and work hard to improve the lives of our own families and communities and not move for more wealth or “a better life” (1 Corinthians 7:20-24).

The new Labour leader is also passionate about non-violent methods to arbitrate peaceful means in resolving conflicts such as between Israel and Palestine, Russia and the Ukraine, Argentina and Britain. He desires to drain power away from the Islamic State in Iraq/Syria, rather than enforce a bloody war hurting more innocents, by blocking funding and arms towards the rich militants.

He also supports boycotting Israeli goods and universities engaging in the arms trade to try to get fairer discussions going between all sides of the Israel-Palestine issue and to allow Palestinian refugees, including Christians, the right to return home through negotiations. Believers following the ‘replacement theology’ view that the Church has replaced Israel as God’s chosen people in these last days would applaud the idea of a peaceful settlement between the two sides.

For the record, Corbyn, who recently tweeted, “Shana Tova to all – have a sweet and happy New Year” to the Jewish community, promotes: “Cohesion and coherence in our society, absolutely opposed to Islamophobia, anti-Semitism or racism in any form.”

Corbyn believes in solely peaceful ways to resolve conflict – in his own words, ‘talking with people with whom you may profoundly disagree’. Or “Love your enemy”, as Jesus commanded.

Israel occupies 0.2% of the land mass occupied by its Islamic neighbours. That tiny piece of land has no oil and has been occupied by Israelis for over 4000 years. Many were expelled in AD 70 by Roman decree when the land was renamed “Palestine” as an insult to the Jews whom the Romans knew considered the Philistines (Palestinians) to be ancient enemies. If Israel’s Islamic neighbours are so concerned about Palestinians why do they not offer them land, perhaps the land once known as Philistia on the Mediterranean coast, just south of modern day Gaza?

Israel would be willing to live in peace with the Palestinians but Hamas represent the Palestinians and they have a charter with a preamble that vows to destroy all Jews. The long history of rocket fire into Israel is Hamas’ way of goading Israel to fight back not for the benefit of the ordinary Palestinians who are used a as pawns by Islam.

Jesus taught us to “turn the other cheek” and to “love our enemies.” This does not include ignoring the right of self-defence and no longer defending the land God has given to Israel. Turning the other cheek means to ignore people when they insult you. Not to lie down and be killed! There is no Biblical mandate against war only against murder. Corbyn is right to seek peaceful resolution of conflicts but in 7000 years of human history it is fact that not everyone is good and bad things happen when good people do nothing and that sometimes means acting in self defence or to pre-empt attack.

The radical leader was once arrested [pictured] for protesting against apartheid outside the South African embassy in London. Compare that to Nigel Farage who formed an alliance with the Congress of the New Right in the European Parliament led by Janusz Korwin-Mikke, a public supporter of apartheid who also doubts Hitler knew about the Jewish Holocaust.

The European “Parliament” is set up in such a way that funding is only given to various groups if they have a certain number of members. Farage’s group fell short by one and they allowed a member from a further right party to join as the best that could be done in the circumstances and in a milieu that is hostile to anti-EU parties. Farage does not support apartheid and has turned down offers from the French FN party to join forces because of some of that party’s anti-Semitism policies. Corbyn and the left perplex many because of their support of Islam and its teachings against the rights of women and the recognition of Sharia law.

The threat of using nuclear bombs as a safeguard for Britain does not concur with Gospel values. As Christians, we are meant to help bring peace to the world not mass bloodshed. So followers of Christ surely agree with Corbyn’s idea to ditch the 100 billion costs of replacing the Trident nuclear missile system and spend them on ‘our national well being’.

No nuclear devices have been deployed in a war since 1945. Nuclear deterrents have therefore been successful in their mission to dissuade such use. The world is a far more dangerous place in the 21st Century than the 20th with more nations having nuclear arsenals including Iran which has sworn to wipe Israel of the map. The Gospel message is simple–believe in Jesus and you will be saved. There is nothing in the Bible to forbid self-defence or the raising of armies. The Bible is full of historical accounts of wars and the defence of the “realm.” Jesus said there will be many wars with nation rising up against nation, especially as the last days approach when even Israel will come under attack.

Other Corbyn beliefs, building more allotments and re-nationalising the railways, are perhaps less Gospel orientated than thoughtful in the interests of the wider community. The ebullience of ordinary folk being in charge of society infrastructure is certainly more appealing than allowing greedy private companies to have self-serving fingers in many pies. Building more council homes also follows a Gospel direction to provide for those in need.

Too many of our strategic industries are under foreign direction and ownership and it was UKIP’s policy to make sure such industries were under the ownership and control of entities in this country. UKIP is taking a strong stand against corporatism which is promoted by the EU and Obama in the form of the T-Tipp treaty which will :pass public ownership of all industries to large multinational corporations.

This is evident with the selling off of everything in our country including, as of this October, our Air-Sea rescue service. UKIP stand against corporatism and especially any moves to sell off the NHS which has been happening under both Labour and Tories through PFI and other stealth policies. What would Jesus say about corporatism? He would probably simply say the love of money is the root of all kinds of evil!

Corbyn stands for the rights of the poor, freedom for the oppressed and loving your enemy. This outlook, far more Gospel centred than his political adversaries, directs his methods as Labour leader and contains biblical values. It is just a tragedy that his faith seems to be in humanity rather than God.

The Gospel message says to care for the poor, not make everyone poor. The Gospel is about freedom and that means honouring our Judeo-Christian heritage which has given us freedom of religion, conscience and speech all of which have come under attack by the left wing advocates of PC.

Corbyn is right to stand up for the poor and against the wide spread corruption especially the banks who get away with massive fraud as their theft is labelled “mis-selling.”

But his aim is too wide because not all businesses are evil or corrupt. Most provide jobs and incomes for millions, especially small and medium sized enterprises. No greater killer of jobs exists than an oppressive tax regime. King Solomon lost his Kingdom and split Israel due, in large part, to his overspending and excessive taxation to fund it!

Corbyn will repeat the mistakes of past socialist governments who impoverish rather than build. Jesus said blessed are those who are poor in spirit. There is no biblical mandate to seek poverty or to impose poverty on others by taxing hard work and consequential success.

What do YOU think? Write to us via the contact form on this site by 10 November 2015 if you’d like YOUR comments to go in the Dec-Jan issue of HEART newspaper.