Christmas will NEVER be cancelled! 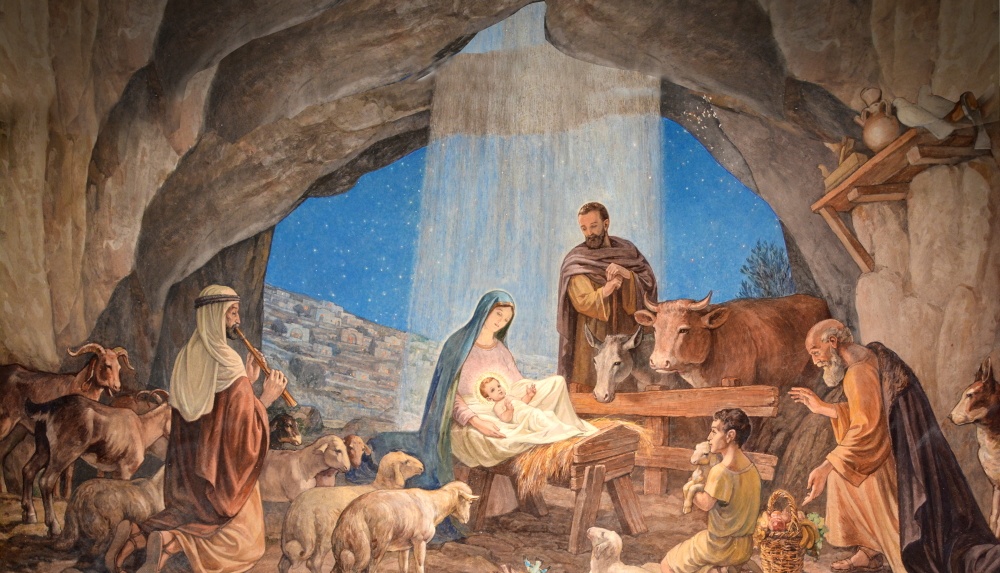 The peace of God can live in EVERY heart

More than ever this year, millions are yearning to celebrate Christmas.

At a time when previous certainties have evaporated and some communities feel they have nothing in their diary but the next Covid crackdown, Christmas shines as a light in the darkness.

When we celebrate Christmas, it’s not just the company and food. It is the eternal hope in our hearts that the baby in the manger represents.

Cute as the baby is, it’s all about who he grew up to be.

Sight to the blind

Two thousand years ago, a Jewish boy was born to a young girl. His mother’s fiancé knew it wasn’t his baby and only went ahead with the marriage because he had a dream in which he was reassured that the baby was conceived by the Holy Spirit and that he was to call him ‘Jesus’.

This was the first of many fulfilments of Bible prophecy. 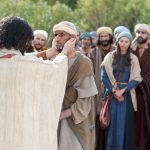 Jesus grew up to be a Bible teacher, whose followers (“disciples”) called him “Rabbi”. Like other rabbis of the time, he healed people. Yet this one did miracles that no other rabbi had done before. In bringing sight to a man born blind, and raising Lazarus (and others) from the dead, Jesus performed miracles that only the promised Messiah (Saviour and Redeemer) was expected to be able to do.

So why did he die a criminal’s death at 33, executed with the brutal efficiency of the Roman Empire?

Why was that death different from any other death at the time? After all, the Romans crucified 500 people a day when they put down the Jerusalem revolt of AD70.

Simply put, this baby “ticked all the boxes” to qualify as the Messiah, the Saviour of his people, the light to the whole world prophesied centuries earlier. His time of birth was foreseen by the prophet Daniel, hence the visit of the Magi (wise men) who had studied the ancient scrolls and understood that this was the destined time for the birth of a very special baby.

The baby was even born into the line of King David and in Bethlehem, the village outside Jerusalem where lambs were bred for temple sacrifices. Jesus’ death was forecast in detail by the prophet Isaiah some 700 years before he was born, before crucifixion as a means of slow, suffocating execution had been devised. And Isaiah also explained why Messiah had to suffer and die: he would pay the price for mankind’s sins. 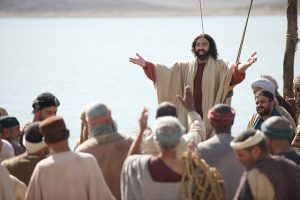 Jesus knew what it was not to be accepted – he grew up with the stigma of being thought to be illegitimate, because his mother had him before she was married. There is nobody on whom he doesn’t have compassion.

What shattered his followers was his death, despite Jesus telling them that he had to die and rise again after three days. Then there were the rumours that he had been seen alive again.

Famously, the disciple “doubting Thomas” demanded to see the holes in his hands and feet before he’d believe in Jesus’ resurrection. Upon seeing Jesus in the flesh with his own eyes (and possibly touching the wounds), Thomas proclaimed, “My Lord and my God!” (John 20:28).

Jesus responded with one of the most powerful statements about faith in all of Scripture: “Because you have seen me, you have believed; blessed are those who have not seen and yet have believed” (John 20:29). 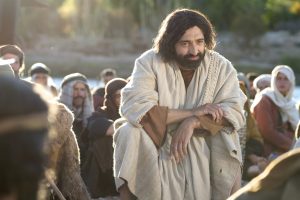 After Jesus’ ascension to heaven, his followers lost their terror and their own fear of a similar death at the hands of the authorities. They obeyed his final earthly command to take the message that this Jesus with whom they had lived had not only risen from the dead but was holding out the promise of eternal life and forgiveness of sins (all the ways we’ve failed) to all who believed.

Millions over the centuries have opened their hearts to him and welcomed in the hope and peace that, in the midst of uncertainty, worry and fear, “passes all understanding.”

This paper would not be in existence if each one of the team had not said the prayer below at some point in their lives.

Why is it necessary to say a prayer? Because that is your move towards the Saviour who died for you. The Bible says that if you were the only person in the world, Jesus would still have died for you. “For God so loved the world, that he gave his only begotten Son, that whoever believed in him should not perish but have everlasting life.”

So why isn’t the world a happy and peaceful place if Jesus died to forgive sins? Because God gave us free will.

Each man, woman and child is free to receive or reject this unique gift, which we celebrate particularly at Christmas time. 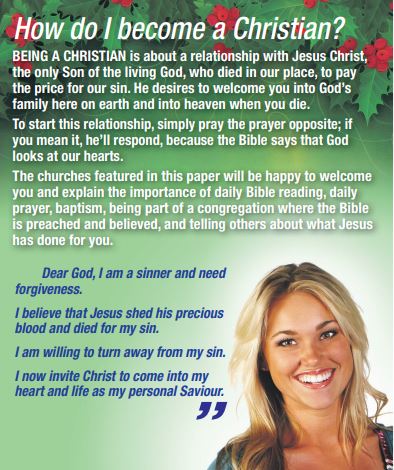 We could, of course, fill pages of this paper with articles about why the birth of Jesus was probably in the autumn around the time of the Feast of Tabernacles, but that doesn’t change the offer he puts before each one of us.

The message at the heart of Christianity is really quite simple. It is a message from the Bible about God and his son, Jesus.

It is about life and death, and the choice that we all face.

If you would like to accept the free gift of forgiveness of sins, eternal life and become part of the biggest ‘club’ in the world –  the international, eternal body of believers in Jesus, please say the prayer below and receive the peace in the midst of the darkness that only Jesus can bring.