My wife loved this book about angels; I wasn’t so sure

When your wife reads a book and tells you it is one you must read next, you sit up and take notice. By the time the book was in my hands I felt that I had read half of it, with the number of times she had said, “You must listen to this” and “Did you know about that?”

Everyone has an opinion on angels and thinks they know a lot about them. This book will open up your mind to so much more that there is to learn.

Once when preparing to preach on angels, I asked our congregation if they’d had any angelic experiences and received more responses than on any other topic.

I struggled with some things in the book. There is clearly a section of the Christian community in America (and maybe Britain) that is devoted to all that Tim Sheets teaches, and considers him an expert on angelic beings, but I question some of his comments. 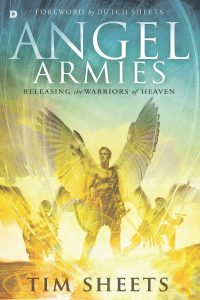 He believes that after the pandemic ends (he likens it to Passover), a new, fresh Pentecost is coming, which he believes will be greater than Acts 2 and will herald a worldwide revival. He tells us to “raise the bar” (whatever that means) and “God will raise the anointing”.

The book is valuable where it takes the reader to the Scriptures and teaching them important truths – Scriptures such as Daniel’s prayer and the 21-day battle in the heavenly realms against the demon prince of Persia and his armies. He points out that Daniel 7:10 talks about Daniel seeing 10,000 times 10,000 angels. Tim Sheets tells us that in his estimation there are 100 million angels.

He describes how in Psalm 68:17, David was allowed to see in the spirit realm “20,000 war chariots of God being ridden by mighty fierce powerful angels”.

He takes readers to other stories, such as Elisha seeing innumerable angels in chariots of fire (2 Kings 6:17).

Turning to the New Testament, and especially Hebrews, he illustrates how the Holy   Spirit ministers to people through angels: “Are not the angels all ministering

spirits sent out in the service of those who are to inherit salvation”. (Hebrews 1:14).

He describes the war in heaven in Revelation 12:7, which will be fought between Michael and his angels, and the dragon and the angels who followed him.

I appreciated his comments about “no angel graveyard” and “angels have not been retired”. He wants Christians to under- stand they are guarded, delivered, strengthened by angels; we are to be blessed by them.

He worries that Christians see demons everywhere, but not angels; that Christians think the devil says things to them but not the Holy Spirit and real angels. He passionately believes the Bible teaches that God assigns angels to bring us answers to prayer.

Angels are important in the lives of believers and we need to be more aware of their presence around us. The book certainly achieves that end.

My wife thought the book was amazing and bought it for several friends for Christmas. I wasn’t quite so sure but I am glad I read it.

‘Reﬂections on the Existence of God’ 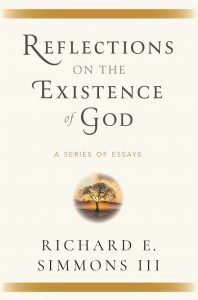 I was not looking forward to reading this book. Its title suggested to me something theoretical, academic, and not easy to read.

Chapter headings such as ‘Atheism and the meaning of life’ and ‘The Psychology of Unbelief’, only reinforced that view. How wrong I was. It turned out to be one of the most important books I have read for a long time.

The author begins the book with a quote from one of the most prominent atheists of the 21st century, Sam Harris, who wrote: “So let’s be honest with ourselves; in the fullness of time, one side is going to really win this argument and the other side is really going to lose.”

With that premise, the book consists of a series of short (ten minutes max!), easy to read es- says that seek to answer life’s most enduring question: “Does God exist?”

He examines the evidence of years of research into key atheistic thinkers such as Friedrich Nietzsche, Bertram Russell, Charles Darwin, Richard Dawkins and Daniel Den- nett. He shares the stories of those who spent much of their lives as avowed atheists, who now declare “There is a God” – people such as Dr Francis Collins, a prominent scientist appointed by President Obama as director of the National Institutes of Health; the author Sheldon Vanauken; the British philosopher and one of the most celebrated atheists of the last 50 years, Anthony Flew; CS Lewis, the Oxford professor considered one of the 20th century’s most influential writers.

Their stories were so encouraging to read. C S Lewis’s life was changed when a close atheist friend admitted to him that he found it highly likely that the Gospels did present historically accurate accounts of this man Jesus. C S Lewis realised he had never seriously examined the evidence. When he did, his life was transformed.

I found the essays on ‘understanding evil’ particularly helpful. The question is, who determines the ‘goodness scale’ that enables us to identify evil?

In another chapter, on ‘the value of human life’, the author uses Mortimer Adler’s words when he was an atheist: “Human beings are nothing more than sophisticated animals”, and reports how he later became a Christian.

What is so helpful about the book is that for all the heady statements about the psychological reasons to believe, the mystery of love, human sexuality, and so much more, the author earths what he is saying with stories of people who have examined the evidence and discovered the real Jesus.

If you know someone who is pondering where Jesus fits into all that is happening in the world today, this could be the book for them to read. It could also be the book for you to study, so you know how to answer those around who ask you the difficult questions about your life.

By John Scriven and Tim Dieppe 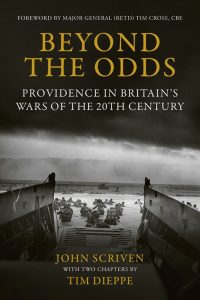 But it is much more than a history book. Those in the armed forces will want to read it, as will Christians intrigued to learn of God’s hand upon the nation.

It is a book that demonstrates the power of God during the wars of the 20th century, from the First World War of 1914 to 1918 to the Falklands conflict in 1982. It contains facts and fig- ures, helpful maps, lots of sto- ries, many useful quotes, and a large bibliography.

Two authors  co-laboured  to produce this amazing book of 602 pages. John Scriven read history and law at Cambridge and served as a Captain in 6/7 Battalion (Territorial Army), The Queens Regiment, and then practised law, before retiring to write. Tim Dieppe studied at Oxford and the Westminster Theological Centre. Today he works for Christian Concern.

Scriven and Dieppe have assembled the chronological facts of the 20th century’s wars and show extraordinary events during the wars that saved the nation from defeat. There were changes in the weather, inexplicable strategic mistakes, strange tactical errors by the opposing forces, the importance of the National Days of Prayer, the beliefs of the commanders.

The first three chapters focus on the first World War in 1914 to 1918 and especially the 1917 campaign in Palestine. There is remarkable testimony from soldiers who, under the leadership of General Allenby, helped capture Jerusalem in 1917.

The book gives details of the nation holding a National Day of Prayer on 6 January 1918, and another one on 4 August 1918, attended by King George V, and supported by both Houses of Parliament.

Then there are five chapters on the Second World War with reference to the fall of France; the Dunkirk evacuation followed by the National Day of Thanksgiving to God for the deliverance that had occurred; the Battle of Britain; D-Day with the remarkable weather change.

The book describes the events surrounding D-Day as “a heaven-sent break”. The battles and events are interspersed with a reminder of the way God’s people prayed, such as the intercessors at the Bible College of Wales, under the leadership of Rees Howell. They would listen to the news on the radio and then spend hours praying very specifically into situations.

God does intervene in the affairs of the nations, in response to faith and prayer

Further chapters follow on the siege of Malta during the second World War, the failure of the German blitz on HMS Illustrious and “the miracle” of the Rotunda Church when, with many people inside, a bomb dropped on it and no-one was injured. There is even a chap- ter on Churchill’s faith and his life-long belief in the power of prayer and miracles, which the authors believe was very important to Britain’s ability to win the second World War.

The authors argue their case with detailed facts as well as stories and quotes, demonstrating that God does intervene in the affairs of the nations, in response to faith and prayer. They remind us that Jesus taught his followers to pray: “Your kingdom come, your will be done on earth as it is in heaven”. They also quote from some of the Remembrance Sunday hymns, such as:

“O God, our help in ages past,

Our hope for years to come,

Our shelter from the stormy blast,

And our eternal home.”

There is so much in the book I found helpful. The final word belongs to the authors: “May God’s deliverance in the past be an encouragement for Christians to hold fast to a biblical faith . . . for others may these be a prompt to explore the truths of the Christian faith.” 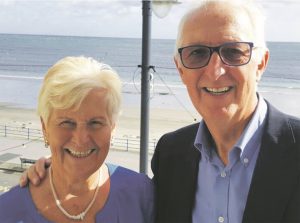 Gordon Pettie and his wife Lorna