The Englishwoman bringing the Gospel back to the Scythians

‘Miracles in the Midst of War’

In Paula O’Keefe’s late teens, God spoke clearly to her: “I want you to lay down three things for me.”

“What is that Lord? You know I love you and want to be obedient …”

“Being a doctor, getting married and watching TV.”

Hampshire-born Paula’s dream was to be a doctor and she was also desperate to be married and have a family. And how could she survive without TV?

But Paula was obedient and still is. Out of the obedience has come the blessing and a growing community of believing Christians thousands of miles away from the comfortable home counties.

By 1998, when still in her 20s, Paula had lived for a year and a half in Chechnya and was co-pastoring a fledgling church. Paula describes the small republic of Chechnya as a beautiful country in the south-west of Russia close to the Caspian Sea.

She tells us that in biblical times the people were called Scythians and the apostle Paul refers to them in Colossians 3.11 when he wrote:

“Here there is no Gentile or Jew, circumcised or uncircumcised, barbarian, Scythian, slave or free, but Christ is all, and is in all.”

But the people Paula met had never heard the Gospel. Until the early 1990’s Chechnya was totally unreached with the good news of Christ but the people were eager to hear.

She had arrived as Chechnya as a 21-month war was coming to an end in which 100,000 people were killed and thousands made homeless. With the war ending, neighbours were still slaughtering one another in the name of ethnic cleansing.

With her English mannerisms, Paula must have seemed a fish out of water as she counselled desperate women and children who had nothing and searched for food and clothing for them. She could at least speak Russian, though, because she had just happened to study Russian as part of her degree at the University of Staffordshire.

Based on Mark 16:20, Paula firmly believed that when you share the good news of Christ, the Lord will confirm his Word and signs will follow.

I like the book because it is an honest account of Paula’s struggles of remaining in a place of faith through some of the darkest and most challenging of times. Obedience is never easy and the author shares with honesty something of the cost of obedience.

Imagine you are in the basement of a building leading worship with about 80 people and seeking to lead the people into the presence of God? Suddenly the door is pushed open and six burly Islamic fundamentalists burst into the room.

They are shouting in their native tongue: “Stop playing that guitar. Stop playing right now!” It happened to the author at a camp she had organised in Chechnya.

“How dare they forbid me to worship my Jesus!”

Silence descended on the room. Thoughts of what could happen flashed through her mind. Then another thought came: “How dare they forbid me to worship my Jesus!”

With a passion she struck her guitar strings. The people followed. They sang at the top of their voices. The Islamists muttered an apology, turned on their heels, and left.

As you look around the war-torn world and wonder where God is, I recommend you read ‘Miracles in the Midst of War’.

Glory Zone in the War Zone

The Bible has a great deal to say about ‘words of knowledge’, prophecy, tongues, healings, the raising of the dead, and even the sprinkling of gold dust. Even so, my initial choice of books would not be one about those things.

Canon Andrew White’s book ‘Glory Zone in the War Zone’ has all of those things in it … and more. So why am I jumping up and down and saying it is a book you should be reading?

The answer is that when the author writes about those things, he writes from the experience of Christians who love the Lord and know the reality of that love in a war-weary country, where they experience persecution for their faith, even in many instances, martyrdom.

This book describes his experiences in Baghdad, in Bethlehem and in other war situations. Initially I could not understand the title, ‘Glory Zone in the war Zone’, but as I read the book, it gradually made sense to me.

Andrew White trained in medicine and then entered the priesthood. Throughout the time of the Iraqi war, he served as rector of St George’s, the only Anglican Church in Baghdad and earned the soubriquet, ‘The vicar of Baghdad’.

After many attacks, the church was forced to go into exile in Jordan in 2014.

Ten of those people were notorious terrorists

Andrew describes seeing 58 Muslims renounce their association with Islam and put their faith in Jesus. Ten of those people were notorious terrorists. He describes how first he had tried to reason with them about faith, and made no progress. The Lord told him to stop talking and simply show Christ’s love to people of other faiths.

He shares the journey of seeing a church that had 50 members when he arrived, grow to some 3,000 people. As the growth and conversions took place, so did the persecution and bloodshed – torture, terrorism, extreme hatred, poverty, Bibles burned, children beheaded. Andrew says he stopped counting the number of dead church members when the total passed 1,000!

It is in the context of such devastation that Andrew describes the miracles, blessing, healing, deliverance – even the gold dust – that members of his congregation experienced. Undoubtedly it was a time of supernatural favour of the Lord.

Andrew describes the worship times in his services as pure focus on Jesus, of angels appearing as they worshipped, of his congregation having dramatic dreams and visions of the ‘man in white’ – Jesus himself.

One interesting facet of the book is the real faith shown by the Iraqi children. Andrew suggests it is because their hearts were more tender than adults: “I have not yet met one child who has said they cannot forgive.”

There are so many miracles recorded. Here is one.

While visiting Jerusalem, Andrew was approached by a gentleman from Northern Ireland.

“Tell me Andrew, how are you doing for Bibles?”

“I informed him that my people’s Bibles had been stolen and destroyed by terrorists,” he writes. “It was hard to retain the tears as I explained that their Bibles were in heaps of ashes amidst the ruins of buildings.”

The Northern Irish gentleman reached into his bag and took out a small device that looked like a mobile phone.

“Andrew, I have these solar-powered audio Bibles. Would you be interested in having them for your people in Baghdad? We have them in both Arabic and English.”

Within a few weeks and to their great delight, every person in the Baghdad church had a solar-powered audio Bible, which they still use to this day.

By Sheera Frenkel and Cecilia Kang

This is not a ‘Christian’ book but is a book Christians should read. Both of the authors are journalists working for The New York Times, specialising in cybersecurity, technology and business.

Their findings are frightening. Christ’s command to his disciples was to go into all the world and preach the Gospel. After over 2,000 years, Christians are still struggling to fulfil that command, whereas Facebook only started 17 years ago and is used DAILY by 2.3 billion people across the globe.

Many of those who use it daily would consider themselves Christians. They use it for keeping in touch with friends and family, and gleaning news and videos for passing on. Social media is the phenomenal growth story of the 21st Century.

How did it create revenue of $22 billion dollars in the final quarter of 2020?

I wonder if you have ever considered how Facebook works? It charges no fees to its customers. So how does it make its money? How did it create revenue of $22 billion dollars in the final quarter of 2020? That money comes from advertisers. Facebook works by encouraging the people who use it to spend more and more time on Facebook. Then their advertisers pay them more money.

How do they persuade people to spend more time on Facebook? They have identified that the more outrageous the stories on Facebook, the longer people stay reading and following them up. Those outrageous stories include hate speech, anti-Semitic comments, Holocaust deniers, and deliberate misinformation and conspiracy theories.

Page 85 tells us: “Facebook employees who have surveyed the global rise in hate speech … found the name of their company surfacing repeatedly as a source of conspiracies, false news accounts and organised campaigns against minorities.”

Not long ago, Britain held its Brexit vote. Do you remember the news talking about a firm called Cambridge Analytica?  On page 154, the authors show how Cambridge Analytica obtained all the information that Facebook held on individuals in the UK. They sold that information to those who wanted to target people in the UK with adverts for or against Brexit. If you use Facebook then that included you!

On 9 December 2020, the USA Federal Trade Commission, and nearly every state in the US, jointly commenced proceedings against Facebook. They accused its founder, Mark Zuckerberg, of being “a rule breaker” who “spied on competitors” and accused him of having “achieved success through bullying and deception… If you stepped into Facebook’s turf, Zuckerberg would go into destroy mode.”

We need to open our eyes to see what is happening in our world. This book will certainly do that!

Hidden truths of the greatest birth in history

‘Revelation at the Manger: Hidden Truths from the Birth of Christ’ 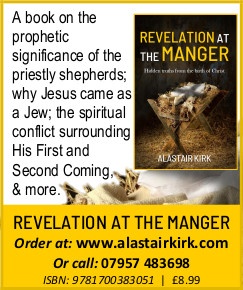 Christmas is almost here. We all know the true meaning of Christmas.

But do we? Alastair Kirk, development manager at Christians United for Israel UK, has written a new book about Christmas.

He writes: “The birth of Christ is one of the best-known stories in the world, but there is still plenty to discover about this incredible event in history. ‘Revelation at the Manager: Hidden Truths from the Birth of Christ’ is a small book at 152 pages. You will be able to read it in an afternoon. But the truths it contains are truths you will ponder on for many days.

The author looks afresh at the Scriptures and shares new insights. For ‘Good tidings of great joy’, he develops the theme of joy. Another example is, “Do not be afraid, Mary”, and “Joseph son of David, do not be afraid to take to you Mary your wife”.

He shows how every time God says, “Do not be afraid” in the Bible, he always provides a sound reason why he has said it.

Other verses he looks at include “There is born to you this day in the city of David, a Saviour…”; “This will be the sign to you, you will find a babe …”; “They saw the young child with Mary his mother and fell down and worshipped him … “; “Wonderful, Counsellor, Mighty God, Everlasting Father …”.

He examines the significance of Bethlehem, the mystery of the inn, the timing of the birth, who the shepherds were, the meaning of the treasure brought by the Magi, the star they followed, and much more.

A little book with new insights into old truths! Worth investing in.