Bakers’ win is victory for freedom of conscience 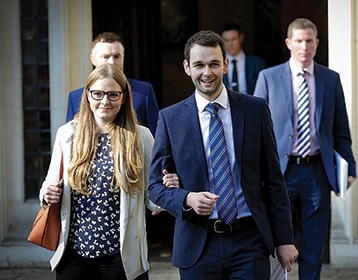 “I want to start by thanking God,” says baker who didn’t bow to political correctness

At HEART we have closely followed the developments in the fraught ‘gay marriage cake’ controversy that mired a Northern Irish family bakery in an escalating legal battle for four years.

So along with the Christian Institute which had championed and fundraised for Daniel and Amy McArthur, the young owners of Ashers Bakery, we shared the relief when at long last they won their case at the Supreme Court in October.

The McArthur family turned down the order to produce a cake with the slogan, “Support gay marriage” because it conflicted with their Christian belief that marriage is between a man and a woman.

All three grounds that Ashers were originally found to have discriminated on were unanimously dismissed by the highest court in the land. The protracted and costly legal action was brought by the taxpayer-funded Equality Commission for Northern Ireland (ECNI).

The McArthurs themselves were quick to give all the glory to God after the Court ruled unanimously that their refusal to make the cake was not discriminatory.

Daniel said after the ruling: “I want to start by thanking God. He has been with us during the challenges of the last four years. Through the Bible and the support of Christians, he has comforted us and sustained us. ‘He is our rock and all his ways are just.’

“The judges have given a clear signal today… Family businesses like ours are free to focus on giving all their customers the best service they can – without being forced to promote other people’s campaigns… this ruling protects freedom of speech and freedom of conscience for everyone.

“And let me finish by saying he [Mr Lee, an LGBT activist who brought the case against them] will always be welcome in any of our shops.”

Andrea Williams, CEO of Christian Concern commented: “This case was never about discrimination against a person. It was always about having the freedom to hold and express the biblical view that marriage is between a man and a woman. It was about not being forced to produce a message on a cake with which the McArthur family disagreed.”

Gay rights campaigner Peter Tatchell also welcomed the ruling: “This verdict is a victory for freedom of expression. As well as meaning that Ashers cannot be legally forced to aid the promotion of same-sex marriage, it also means that gay bakers cannot be compelled by law to decorate cakes with anti-gay marriage slogans.”

Peter Lynas, director of Evangelical Alliance Northern Ireland, commented: “This is a win for everyone, no one should be forced to say something that they disagree with.

“It is disappointing that this case has been pitched as Christians versus the LGBT community.

“The court found that there was no discrimination on the grounds of religious belief or political opinion, and ultimately concluded that compelled speech would not have been justified in this case.

“All three grounds that Ashers were originally found to have discriminated on have been unanimously dismissed by the highest court in the land. Asher have won, but everyone will share in the benefits.”

In the light of the Ashers ruling, Mr Lynas also called for updated guidance for business owners and customers from the Equality Commission on the provision of goods and services.