Are you investing in fake or fortune?

Visiting family and friends recently naturally exposed me to conversations – and television programmes – with which I am generally unfamiliar.

Among these was the intriguing BBC programme Fake or Fortune which, for this particular episode, focused on a rather beautiful portrait passed down through an aristocratic family line.

As it was unsigned, no-one was sure who had painted it. It was generally accepted as the work of a high calibre artist of the mid-19th century which, if proved to be the case, would fetch around £8,000 at auction.

However, another expert was convinced it was the work of the famous Thomas Lawrence, which would increase its value exponentially to some half-a-million pounds! And, indeed, it proved to be one of his!

There’s a lot at stake over the question of who’s behind a particular work of art. And I got to thinking how this inevitably also applies to the Creator of the world: is God behind the beauty of our creation, or are we to put our trust in Charles Darwin’s ideas?

Come to that – who wrote the Bible? Was it God, or man? These are big questions, and the stakes are high in terms of the answers.

According to the Apostle Paul, the acknowledgement of God as Creator is of vital importance. In fact, he points out, the denial of such leads to a progressive unravelling of civilization itself.

Under the inspiration of the Holy Spirit, Paul writes that men suppress the truth by their wickedness (Romans 1.18) – and the first casualty is denial of God as creator (verses 19 & 20). As a result, their thinking becomes futile and they worship created things rather than the Creator (v23). This in turn leads to sexual degradation and the shameful lusts of lesbianism and homosexuality (verses 26 & 27).

In this letter to the first century Christians in Rome, Paul was writing in the context of a civilization that was well on its way to being unravelled – and remarkably comparable to 21st century Britain! Strange, and yet we are constantly being told that things have ‘moved on’.

The psalmist wrote: “The heavens declare the glory of God; the skies proclaim the work of his hands.” (Psalm 19.1)

Sir David Attenborough enthuses over the wonderful creatures God has made without ever mentioning their Maker1, but sure to always emphasise how many millions of years it has taken each species to evolve. Yet God created the world in six days!

Yes, the stakes are high. Our values depend on recognition of whose hand is behind the canvas before us. A life lived in the knowledge of him through whom all things were made (John 1.3) – the greatest ‘artist’ of all time – will be truly priceless.

I don’t believe the residents of Derbyshire’s Whaley Bridge, threatened by a breach in the reservoir above them, merely crossed their fingers as the BBC correspondent reported they were doing. When a further thunderstorm was forecast but subsequently passed over the village, I am apt to conclude that residents took to genuine prayer. There are no atheists in a trench, they say.

As exemplified by the Whaley Bridge crisis, the walls have broken down in British society. And as in Nehemiah’s day, when the walls of ancient Jerusalem were in ruins, we too must return to the God of Israel if we wish to rebuild our country on solid foundations. 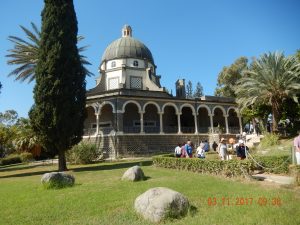 The church built on the Mount of Beatitudes – the reputed site of Jesus’ famous sermon Picture: Charles Gardner

Concluding his famous Sermon on the Mount, Jesus said: “Therefore everyone who hears these words of mine and puts them into practice is like a wise man who built his house on the rock. The rain came down, the streams rose, and the winds blew and beat against that house; yet it did not fall, because it had its foundation on the rock.

“But everyone who hears these words of mine and does not put them into practice is like a foolish man who built his house on sand. The rain came down, the streams rose, and the winds blew and beat against that house, and it fell with a great crash.” (Matthew 7.24-27)

1It’s worth mentioning, however, that his family hosted Jewish refugees throughout the war.