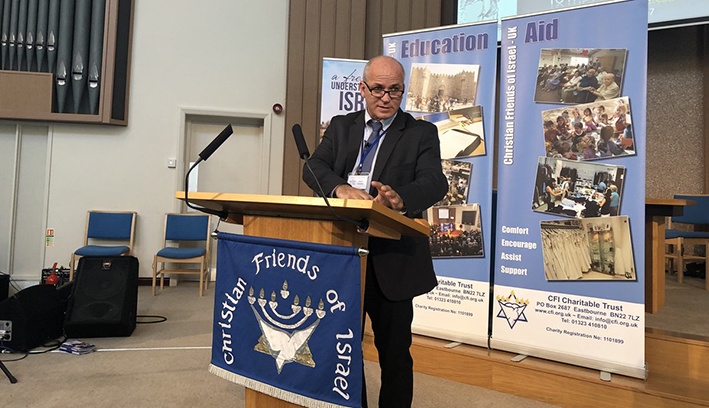 Three men working on the spiritual front lines in Israel brought a gritty authenticity to this year’s CFI conference as they talked frankly about the battles they face.

Victor Kalisher, General Director of the Bible Society in Israel, spoke about God’s plan and purpose for the people of Israel, exploring the historical and present day attitude of God to his own people. The covenant and promises of God are still in force. As Victor said, “What God has said he will do.” And he repeated it to emphasise that no matter our feelings or beliefs, God will still have his way.

Ultimately the salvation message will be preached by Jews, but God’s plan for Israel to be priests to the world is being thwarted or constantly hidden by ‘the enemy’ throughout the ages.

He also brought insights into the work of distributing God’s Word and how hearts are warming to the Scriptures.

When distributing Scriptures, in order not to cause religious offence, Old Testaments are offered first, which have Messianic texts highlighted in red.  Readers often find this eye-opening, as so many of the Old Testament prophecies foreshadow the life of Jesus.  Some ask for the New Testament.

Johnny Shahwan, founder of Al Liqa (House of Meeting), a Christian Community and Training Centre in Bethlehem, teaches children to be peacemakers using the Bible. The Centre has child daycare, a guesthouse and an indoor garden called ‘PeaceArk’ used in the winter as a safe place for children to play.

One lovely comment he gave was that many Muslim parents sign a form giving permission for their children to learn “how to pray and sing like Christians”.

Although his organisation is registered with the Palestinian Authority as a charity, he warned that the surrounding nations are trying to remove all Christians from Bethlehem, offering to buy their land or business for above  the market price.

Shadi Khalloul, Chairman of the Israeli Christian Aramaic Association, has been reviving the ancient Aramean identity, which precedes Abraham. Seven years of lobbying the Israeli government enabled them to be recognised as a people group in 2014 and have their correct status on their identity cards. He is also involved with building the first Christian town in Israel – not a small thing to do! But he believes it will be significant in the warming of Christian relationships with the Israeli people.

The future is very exciting but dangerous for all these men, who each requested that Christians should constantly keep them in their prayers.