A call to the ‘remnant’ Church 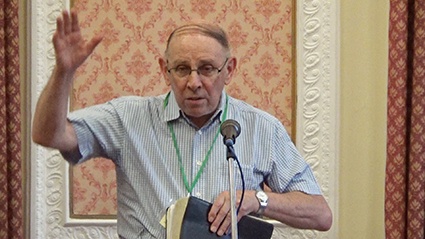 If you’ve ever wondered who the troops of the ‘remnant’ Church are, 150 of them from around the nation had booked to attend the first South West Bible Week. And by the end of the first day, they had found kindred spirits at dinner and were filling in a form to return next year.

The Bible Week was put on by Christian Ministerial Fellowship International (CMFI), a coalition of ministries that exists to spread the Gospel, including supporting missionaries and providing fellowship for ministers and associate members.

The week’s teaching did not disappoint; it was wonderfully rich, as I’d expected, given the line-up of speakers, with a clear flow of inspiration as the main speakers, without prior consultation, followed the previous message.

Themes were the state of Britain today, why the nation and Church are due for judgement (David Noakes wondered why the Lord was holding back), discerning true and false ‘anointings’ (John Angliss declared, “When the glory of God comes, people fall forwards, not backwards”), and how today’s Church mirrors some of the churches in the book of Revelation. Jacob Prasch continued this theme, demonstrating his usual scholarship and outspokenness.

Speaking of the Church’s responsibility to spiritually safeguard her people, David Noakes said, “False teachers and false prophets have brought the nation to the brink of disaster”.

After referring to a prophecy he had received in the 1970s about God’s plans to bring a division in his Church, David declared, “God is seeking to separate a true ‘ekklesia’, a called-out people.”

He also brought two extended prophetic messages, which were encouraging in that God was starting a new work among the people he had brought to the event, but also warnings: “It won’t all be sweetness and light!”.

Host pastor Ian Huxham, whose teaching on biblical ‘types’ was enlightening, said: “We’re seeing the start of a strong delusion in the Church over marriage and Israel. God’s judgement often takes the form of famine – and we’re seeing a famine of the Word of God
being proclaimed.”

Understanding the place of Israel was a key topic; CMFI council member Paul Sherbird from

Cornwall said, “Lots of people tell me they’re contending in their churches for the truth about Israel.”

The presence of Derek Rous, director of Prayer for Israel (PFI), for most of the week, encouraged visitors; he gave an update on the spiritual state of the land and led a prayer session.

In this space it is impossible to do justice to this excellent week, but recordings of all the sessions are freely available online at Genesis Christian
Radio.