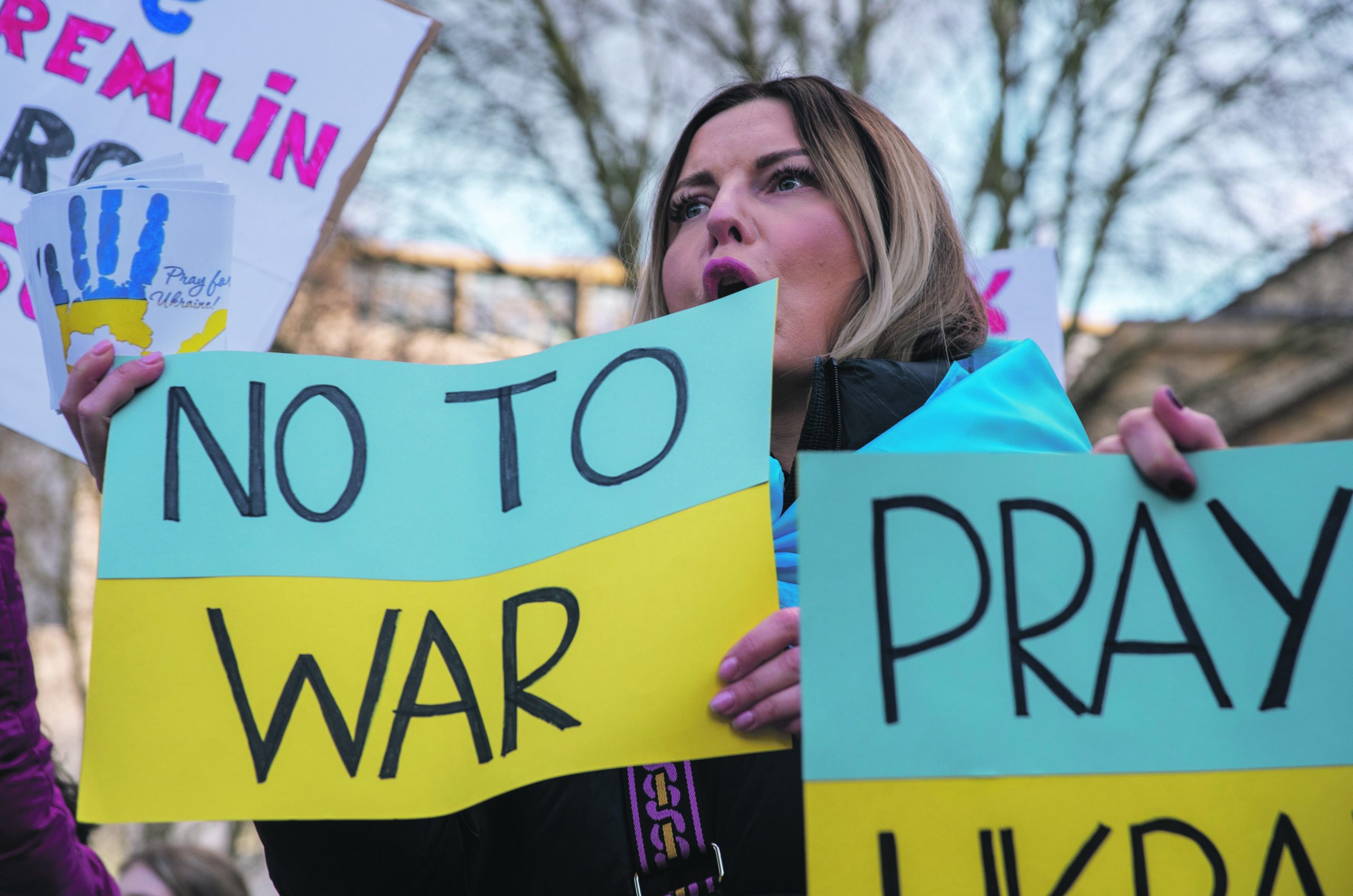 Bombs are falling, but people are seeing miracles and Bibles are selling out

“There are no atheists left in Ukraine now”, one pastor told a UK Zoom meeting.

“Churches are packed to capacity and people are weeping and seeking God as never before.”

As a result, miracles have been happening which the mainstream media ignores.

A missionary who fled Ukraine has described how the people believe God has been helping them in their fight.

Sharyn Borodina, who lived in Ukraine for 20 years and worked with her husband for Youth With a Mission, reported: “We’re hearing time and time again that the Ukrainian army is saying, ‘We recognise that there’s no reason that we are able to hold back the enemy forces’.

“They know that God is helping them; they’re seeing miracle after miracle; bombs dropping that don’t explode, Russian tanks that run out of gas for no reason, Russian soldiers who are putting down their weapons and giving themselves up as POWs because they’re not passionate about this conflict”, she told Premier News.

Sharyn and her daughters fled to Poland and then back to her home in the USA – but her husband has stayed behind to continue helping the people of Ukraine.

Ukrainians turn to the Bible

Bible sales have shot up in the Ukraine since Putin’s war started.

According to Faithwire, at least one Christian shop has totally run out of Bibles. Robert L Briggs, president of American Bible Society, writes… “priests and pastors over the past weeks have been flocking to the Bible Society store in Kyiv to buy Bibles… We need more Bibles.”

Evangelist David Hathaway’s ministry confirmed the hunger for Bibles: “As a result of the war, people are buying up all the Bibles in Ukraine and they urgently request more. We work with the Ukrainian Bible Society and will be printing more.” It is also reported that Christians and Jews in the country have come together to pray Psalm 31.

President Vladimir Putin has quoted the Bible to justify the Russian invasion of Ukraine.

Putin has said his so-called “military operation” in Ukraine was to “liberate people from their suffering” and “demilitarise and denazify” the country. He was referring to the under-reported atrocities of the Neo-Nazi Azov Brigade in the Donbass region since 2014, which has endured repeated shelling by Ukrainian forces. According to reports by independent broadcaster UK Column, the British Army has been training far-right troops in Ukraine.

But the Russian president has been accused of twisting Scripture to justify his invasion of Ukraine after he paraphrased the words of Jesus from John 15:13. At his Moscow rally to commemorate the eighth anniversary of his annexation of Crimea on 18 March, President Putin declared: “To liberate people from the genocide is the main inspiring motive of the military operation we started in Donbass and in Ukraine, this is the objective, this the aim and, you know, I remember these words from the Bible, there’s no other love other than if someone gives their soul for their friends.”

Putin has stated several times that his wish is for Russia and Ukraine (together with Belarus and other Eastern European states) to form a single ‘Russian world’ with a common language (Russian), political centre (Moscow), spiritual centre (Kyiv), church administration (the Russian Orthodox Church), all united under one leader (Putin).

This appalled Eastern Orthodox Christian scholars from around the world, who have supported a statement to express their horror at the suffering in Ukraine and the weaponisation of Christianity in Russia.

The declaration, which has been organised by Dr Brandon Gallaher from the University of Exeter and Dr Pantelis Kalaitzidis, from Volos Academy, is now available in over 10 languages.

Dr Brandon Gallaher told Premier: “The religious ideology is so wicked, [with] some sort of pretence that invading another country is an act of love.”

He added: “It distorts the Gospel, it … makes it into something which is an absolute contradiction of love, which demands that you serve not only the brother, but the enemy, the one who disagrees with you. Christians are called to be peacemakers, not warmongers, to stand up for justice and to condemn injustice.”

The declaration can be signed here: https://publicorthodoxy.org/2022/03/13/a-declaration-on-the-russian-world-russkii-mir-teaching/

Persecution of Christians if Putin wins

Army “has a blacklist of pastors”

Fears for religious freedom in Russian-controlled areas of Ukraine have heightened with the kidnap of a Ukrainian pastor by Russian soldiers in the city of Mariupol.

The charity Release International believes that Alexander Glushko, pastor of the Mariupol Evangelical Church ‘Light of the World’, was taken in mid-March because Protestant churches oppose Putin and the invasion. Another pastor has gone into hiding after a narrow escape, but his church building, where the pastor’s family also lived, has been confiscated. The Russian army is thought to have a blacklist of pastors to detain.

Andrew Boyd of Release International says pastors are targets because they are seen to be patriots and leaders of communities. In areas such as Luhansk – which came under Russian control in 2014 – the authorities have closed most Protestant churches and have banned Christian books, including booklets of the Gospel of John and works by Spurgeon and Billy Graham.

Boyd warns that religious freedom would be severely restricted if the Kremlin controls Ukraine – as only the Russian Orthodox Church is favoured by Putin.

The authorities have closed most Protestant churches

He added: “If you’re a Christian leader, your first authority or first responsibility is to God. It puts Christ above the king, above the Emperor, above leaders. So we’ve got evangelical and Protestant churches who are declaring that Jesus Christ is Lord who are not part of the Orthodox system, which is very much hand in glove with Vladimir Putin and the Kremlin.”

“Pavel’, Release International’s partner in the Ukrainian capital Kyiv, said: ‘The entire territory of Ukraine is under fire. There is no safe place and the goal has been to sow panic everywhere. Our hope is in the Lord.” 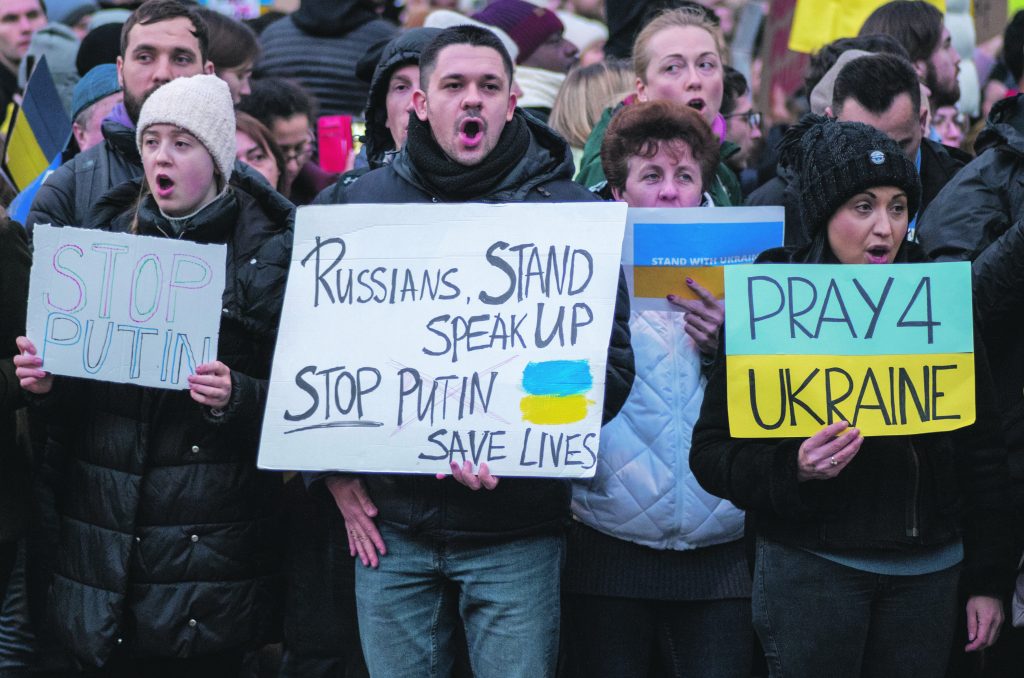