Distinguished evangelicals who would not ‘keep silent’ about the physical restoration of Israel (Isaiah 62:1-6): left to right, John Wesley wrote about it, C H Spurgeon preached about it, Lord Palmerston proposed it

Britain was entrusted with the mandate to look after the Holy Land, yet later refused entry to Holocaust survivors. In Israel’s 70th year, Robin Lane examines a turbulent history

AS THE STATE OF ISRAEL CELEBRATES ITS 70th ANNIVERSARY, THE QUESTION ARISES:
does the British nation and its Church still have a role to play?

In its earliest days the Church was entirely Jewish. But it faced opposition from unbelieving Jews, and the opposition grew stronger during the First Jewish-Roman War after believers in Jesus remembered his warning (Luke 21:20-24) and fled as Roman legions approached to lay siege to Jerusalem in AD 70.

That opposition flared again during the Bar Kokhba revolt against Rome. When Simon Bar Kokhba was declared to be the Messiah, those Jews who believed that Jesus was the Messiah were unable to support their kinsmen, causing great bitterness when the Romans defeated them and devastated Jerusalem.

As more gentiles became believers in Jesus, power in the Church shifted to Rome and in the next two centuries Jewish influence diminished. Thus almost 200 years after the fall of Jerusalem, the Emperor Constantine was able to summon church leaders to a Council in Nicea. They widened the rift between Jew and gentile by separating Easter celebrations from the Jewish Passover.

When British churches rejected Rome’s authority, Pope Gregory sent Augustine to Britain in AD 507 to convert the British to Roman ways. But the influential Irish missionary Columbanus was troubled by Augustine’s intervention and wrote a strong letter to the Pope opposing the separation of Easter from Passover. It was years before Rome finally won the argument at the Synod of Whitby in AD 664 and the feasts that Jesus observed were removed from church life.

Once able to read the Bible in their own language, evangelical Christians became convinced that God planned a return of the Jewish people to the land of Israel. Here are four examples among many:

Thomas Brightman (1562-1607) was one of the earliest, writing: “Shall they return to Jerusalem again? There is nothing more certain: the prophets do everywhere confirm it and beat upon it.”

In 1649 John Owen spoke in Parliament of “the bringing home of his ancient people to be one fold with the fullness of the gentiles, raising up the tabernacle of David, and building it as in days of old…”

Then in 1754 John Wesley wrote about the restoration of Israel: “So many prophecies refer to this grand event that it is surprising any Christian can doubt of it.”

And 90 years later, in 1864, C H Spurgeon preached on Ezekiel 37, saying that it: “…must be evident that both the two and the ten tribes of Israel are to be restored to their own land…”

The impact upon politics

That consensus led Lord Palmerston, British Foreign Secretary in 1840, to put a proposal for Israel’s restoration to the Turkish Government. The Turks refused, but evangelical belief was clearly having a significant impact upon British politics.

That impact showed most clearly in the Balfour Declaration of 2 November 1917. The military campaign in the Holy Land went well and just a few weeks later the Turks evacuated Jerusalem, allowing its capture on 9 December. Two days later General Allenby famously entered the city on foot, in a mark of respect for his Saviour. 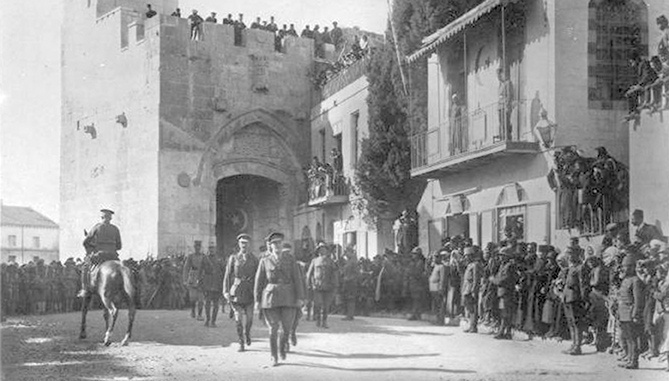 A victorious General Allenby entered Jerusalem on foot in 1917

Those events led the League of Nations to grant the British a mandate to supervise the establishment of a Jewish homeland in what was then called Palestine. God had called the British to facilitate the restoration of the Jews to the land of Israel, and had given them the relevant earthly authority. 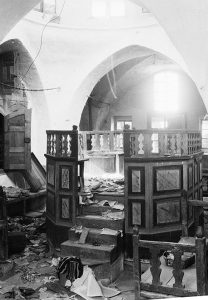 A synagogue desecrated during the 1929 Hebron massacre

Sadly, British involvement then swung against the Jews through the installation of a military administration that opposed Jewish restoration. A Muslim extremist was appointed Grand Mufti of Jerusalem, and at Easter in 1920 the British made the serious error of withdrawing security forces from central Jerusalem during riots, leaving many Jews defenceless in the face of Arab violence.

Soon afterwards Winston Churchill gave 77 percent of the mandated territory to the Arabs as Transjordan – later to be renamed Jordan. Then in 1929, Jewish survivors of a massacre in Hebron were removed by the British, bringing to an end the oldest Jewish community in the land.

The British also restricted Jewish immigration into the land, building the Atlit detention camp in 1938 for illegal Jewish immigrants. Jewish immigration was limited to 75,000 people over the next five years – just when Europe’s Jews desperately needed a homeland to which they could flee.

Unsurprisingly, the League of Nations Mandates Commission accused Britain of ‘a flagrant breach of its mandate’.

As a final blow, the British even collaborated with Jordan’s leaders in annexing large parts of Judea and Samaria. Yet as soon as the British withdrew from the land in 1948, Israel was restored, miraculously surviving a combined assault by five Arab armies.

Nationally, the British had clearly turned their back upon God’s call.

Is it now too late for the British to make amends for their treatment of the land and people entrusted to them?

In general God requires the Church to show mercy to people in recognition of the mercy she has received from him. Thus there is a need to repent of the indifference and hostility that is so often shown towards Israel.

Then, as the late Bible teacher Derek Prince highlighted in 2003, there is God’s statement through the prophet Isaiah to consider – that the nation and kingdom which shall not serve Israel shall perish (Isaiah 60:12).

The current British government continues to defy biblical prophecy by supporting the formation of a Palestinian state. Worse still, many churches in Britain agree with that policy, thinking that Israel no longer has a special place in God’s plans.

There is an urgent need for churches in Britain to regain the understanding of biblical prophecy regarding Israel that God developed among our forefathers.

This article is based upon a booklet titled ‘A Nation Called by God’ which is available from Christian Friends of Israel (www.cfi.org.uk or phone 01323 410810).