The Bible was reading me!

Secretary to the British ambassador in Paris, English teacher, wife, mother – Joy Rockwood-Suwalsky has worn various hats over her lifetime, and her colourful autobiography describes how God was leading her ‘step by step’ even before she knew him personally. 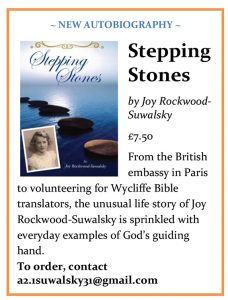 After the death of her mother at seven, she tried to ignore God, throwing herself into studies and sports at Luckley boarding school, Berkshire.

After the war, her excellent French and typing skills, coupled with a year as an MP’s secretary in the House of Commons and work experience in Switzerland, landed her in the British embassy in Paris as private secretary to the British ambassador himself.

At a ball in Paris she met the charming Jean Suwalsky; marriage soon followed, but his womanising tendencies led to a difficult relationship and caused much heartache.

Jean was aloof from their children, André and Isabelle, leaving Joy to bring them up almost single-handed. Later, he divorced her.

Then her runaway teenage son André dramatically gave his life to Jesus at an evangelistic event and invited her to his baptism. To stave off his pestering she read the Bible from cover to cover.

Although she was familiar with it and had sent André to a Catholic school, she realised her Bible  knowledge was all in her head, rather than in her heart. Soon she discovered that God’s Word was actually reading her, revealing her own problems and weaknesses!

“I so admired the total honesty of each [Old Testament] character, admitting that he or she had done wrong in not first consulting the Lord.”

When her life was spared from an explosion in her flat, she finally committed her life to Jesus and got baptised. Following her conversion, she volunteered for nine years in southern France for Wycliffe Bible Translators.

There are some great short testimonies about God working in her life such as driving down to the south of France with no idea where she would live and hearing God direct her to “Turn left, go straight on”, until she found a house to rent.

In this down-to-earth book, Joy recounts both her mistakes and achievements with lightness and humour. Her story is full of practical examples of God’s guidance and provision in everyday life.