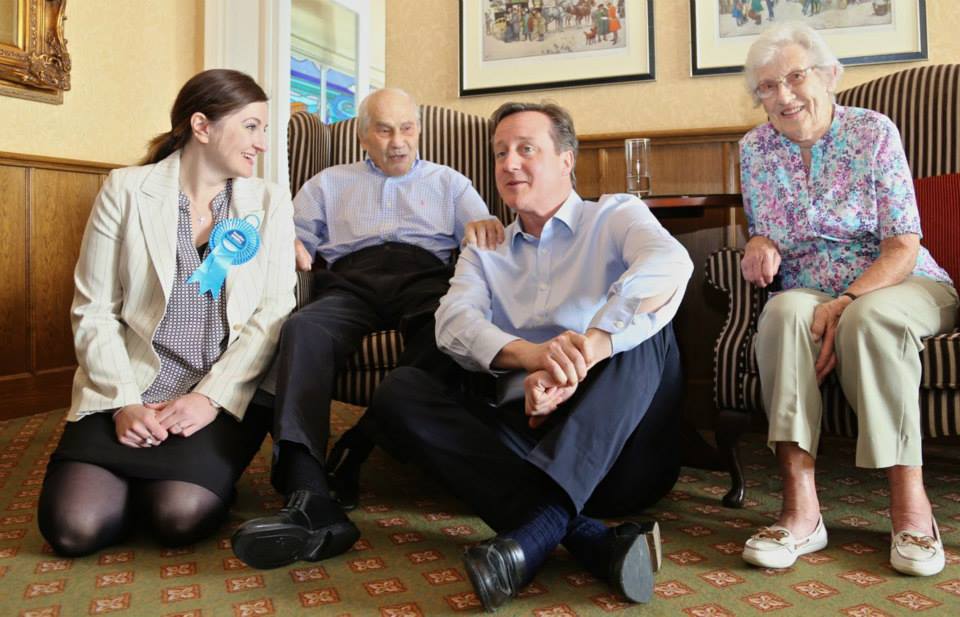 Teacher Caroline Ansell, who has been open about her Christian faith, was elected Eastbourne MP. Here she is talking with PM David Cameron and George Kirby, 103, and Doreen Luckie, 91, who were set to become the oldest bride and groom in Britain once married at the Langham Hotel on June 13!

SUSSEX FOLLOWED THE TREND of England and Wales in the General Election vote with the Conservative Party steamroller splashing Tory-blue paint right across the constituencies.

Church leaders encouraged believers throughout the county to pray for those standing for parliament and on councils. Some church buildings also made useful polling stations on the day itself. St Peter’s Church in Ardingly was offered by the Rector, Rev John Crutchley, to his congregation as a place for quiet prayer if they were ‘overwhelmed or even underwhelmed’ by the campaigns and needed ‘a place to retreat away from all the electioneering’.

Before the results were in, HEART asked candidates how they would represent Christianity if they won but few replied. Crawley MP Henry Smith said he, ‘hoped to stand up for the rights of Christians in the years to come’. Tim Loughton, MP for East Worthing and Shoreham, gave a short response: “This is not realistic.”

Election results made a big impact in East Sussex where Nusrat Ghani became one of 13 Muslims in the UK elected to parliament, replacing Charles Hendry who stepped down as the Wealden Conservative candidate. Caroline Lucas, former Green Party leader who supports buffer zones against anti-abortion groups outside abortion clinics, retained her Brighton Pavilion seat.

Lib Dems Norman Baker (Lewes) and Stephen Lloyd (Eastbourne), both hard working men with no stated religious beliefs, lost their seats as a result of the nationwide culling of Liberal Democrats in favour of the Conservatives.

Maria Caulfield, a practising Catholic and a member of the Conservative Christian Fellowship, took Lewes. Caroline Ansell, a former French teacher who has been publicly vocal about her faith in Christ, took Eastbourne.

Mrs Ansell, who told this paper in 2014 that she would have voted in support of traditional marriage, said: “As a Christian, I put huge emphasis on religious freedom, tolerance and supporting those who are struggling.  My faith is one reason why I am standing to be MP. It is a huge motivation in my life, and gives me a focus where I am determined to support those in their time of need, as well as investing in those who are aiming to make the most of their lives.”