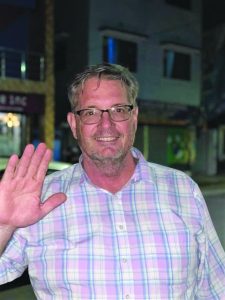 An American pastor has been arrested and detained in India because he is a Christian.

After more than 17 years ministering to the people of Nepal and India – training Sunday School teachers – Bryan Nerren was stopped on his way to a conference in India.

He was questioned about his Christian faith and whether funds he was carrying would be used to support any Christian work; he was subsequently arrested and wrongly accused of violating India’s Foreign Exchange Management Act. He has been detained in India since 5 October and was not
allowed any visitors.

The doctor spat on the floor before examining him

Because of a health condition, he was later taken to hospital, where on his first night three people died from infectious diseases in the same room. When a doctor came to see him, the first question he asked was if he was a Christian. When Nerren replied that he was, the doctor spat on the floor before examining him.

After six days in jail he was released on bail but his passport has been confiscated so he cannot leave the country. His next court appearance was to be on 12 December.

He is one of several imprisoned pastors for whom the American Center for Law and Justice (ACLJ) is campaigning.

Children banned from school for refusing to study Islam

Other recent examples are Iranian Pastor Youcef Nadarkhani, whose children are banned from school for refusing to study Islam, and an arbitrarily detained pastor in China, Pastor Cao, whose case has recently been taken up by the UN.

Petitions for these men can be signed at aclj.org

“Why I forgave my husband’s killers,” says Christmas Eve widow