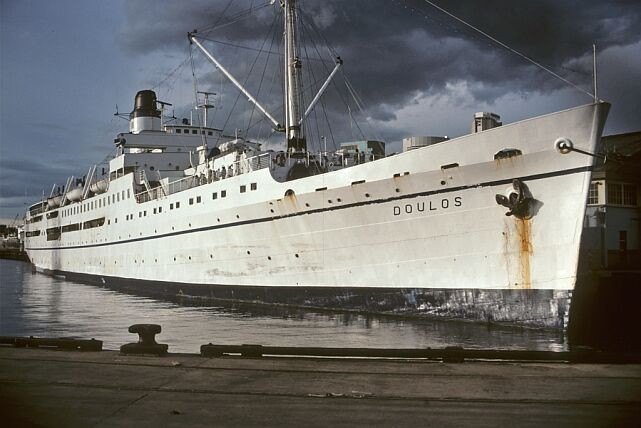 OM (Operation Mobilisation) is known for its dynamic founder, George Verwer, and its use of ships staffed by volunteers that bring the Gospel to remote destinations.

Here Richard Prendergast, the former captain of one ship, the Doulos, reminisces

In February OM Ships celebrated the maiden voyage in 1971 of its first vessel, Logos, to spread the Gospel of Jesus Christ, assist local churches, distribute educational books, and train youth in cross-cultural missions.

Doulos, a passenger ship, joined Logos in 1977 and Logos II replaced Logos in 1988. Only Logos Hope, a former 12500 tonne car ferry, remains in service. It is currently in the West Indies with a volunteer crew and trainees from up to 60 nations. To date OM’s four vessels have visited 150 countries, and some 50 million people have visited their book fairs and attended onboard conferences.

My wife and I first joined Doulos in West Africa in 1986, and our son attended the international school onboard. Life was basic but God answered our own and our supporters’ prayers meeting needs for income for fuel, food, books to distribute and ministry opportunities.

Port visits usually last a week or two. Doulos once arranged a 24-hour visit to the only ocean berth in the Solomon Islands to hold an evening outreach in a football stadium, but arrived to find the berth occupied by a ship loading rice.

It was raining, so work had ceased because rain ruins rice. We prayed for the rain to stop. It did, but the port authority radioed that the weather delay would mean loading all night. We prayed again that the cargo ship would leave. The grain elevator suddenly broke. It was God’s answer. The ship vacated the wharf as it would take days to fix. Doulos berthed in time to conduct the outreach programme. Many islanders received the Gospel and were discipled by local pastors. God’s plans are never thwarted. He is sovereign.

In 50 years, God has fulfilled his purposes through OM’s ships in countless ways.

Richard Prendergast has written a memoir of his time on the Doulos which can be downloaded. If you’d like it sent to you, please email subscribercommunity@heartpublications.co.uk