At 16, I chose Jesus over the dark destiny planned for me

The supernatural help Greg experienced while battling forces of darkness during the séance was his first encounter with the God of the Bible. Not long afterwards, he had his first introduction to Jesus – this time in the middle of rush hour traffic in Salisbury, Rhodesia.

During his first driving lesson at 16, Greg was navigating the flustered drivers of Salisbury’s 5pm traffic when his cool and calm instructor Jenny suddenly started talking to him about Jesus. To get her to stop, he finally agreed to come to church with her.

That Friday night, Greg walked defiantly into Jenny’s Assemblies of God church and sat at the back. As the youth leader, Bushy Venter, began preaching, Greg sensed something quite new: “I felt God speaking to me. I came under a deep sense of conviction. An intense struggle was going on with the demonic forces inside me.”

When the preacher asked if anyone wanted to invite Jesus into their lives, Greg “exploded” out of the back pew, running to the front and falling on his knees.

“That night I found Jesus Christ as my Lord and Saviour and became ‘born again’. I physically felt the weight of sin and the years of occultic oppression lift off me instantaneously.”

But he hadn’t reckoned on the intense spiritual opposition he would encounter when he got home: “The moment I walked through the front door, Mum swung round and screamed, ‘What have you done?’ I hadn’t said a word. But the demonic forces in her reacted to the Spirit of God inside me and a spiritual war broke out.”

That night he woke up with a feeling of dread, battling to breathe. “I felt as if a hand on my throat was trying to choke me to death. In my head I just cried out again, ‘God help me!’. Instantly it left me.”

For one week, Greg says his bedroom was “invaded with demons” every night. Now their nice masks were off: “I saw terrifying, ugly beings.”

Soon his mother gave him an ultimatum: “Either you lose Jesus, or you get out of the house. And if you don’t lose Jesus, you lose your inheritance.”

“I didn’t know what to do,” Greg remembers. “All I knew was that the reality of meeting Jesus Christ had changed me forever.”

At that point Rhodesia was fighting the Bush War of 1964-1979, so Greg decided to go into the army as a boy soldier. Taking the application to his mother’s firm where she worked as an accountant, he told her, “If you want to get rid of me and my Jesus, sign these forms.”

From that moment on Greg only saw his mother occasionally until her death in 2000. He and his brother Angus also remained distant. “As my own children got older, I realised that I had to cut ties to protect them, as my family’s power and money could have been used to draw them away from the Lord.” 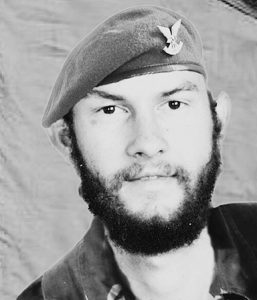 Soon Greg was training with the Rhodesian Light Infantry (the equivalent of commandos) and sharing his new-found faith with his fellow recruits.

After 12 weeks of basic training, Greg was deployed to the north-east border – the front line.

During a firefight, he shot a terrorist dead and remembers praying, “Lord, what have I done? I’m not yet 17 and I’ve taken a life.”

A day later, another traumatic incident was to affect him deeply. A young man called Johan, whom Greg had recently led to faith, was killed by a rocket explosion: “If his body hadn’t absorbed most of the blast I would probably have died too. I was battling mentally to deal with what I’d seen, and felt so confused inside.”

When back home, Greg tried to speak with his youth leaders, desperate for some spiritual guidance. But they were too busy to speak to him, and when he rang the church, he discovered that the pastors were away on a golf tournament.

At that point Greg angrily decided he had “had enough of God”.  When some church members visited him a few months later, he threatened to shoot them. In 1976 his national service ended and he started studying Automotive Technology, but spent some months each year as a territorial soldier, soon entering the Selous Scouts, or Rhodesian special forces. “I always carried my Gideons’ Bible in my pack although I was too upset to read it,” he says. 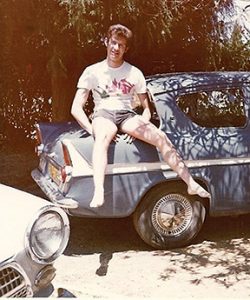 Soon a life-threatening incident convinced Greg that God hadn’t given up on him. Waiting with a small group of soldiers to be picked up one night, 130 terrorists ambushed them.

“A tremendous wall of gunfire hit us. As I dived for the ground, the words flashed through my mind, ‘God, I don’t want to die tonight!’”

For the first time in his life, Greg heard God’s audible voice, saying: “You have a choice to make. You either serve me for the rest of your life, or I’m taking you home tonight.”

In a split second Greg replied, “Lord, I’m going to serve you.”

After half an hour of incessant rockets, mortars and machine gun fire, the terrorists suddenly ran off into the bush, leaving the ground shot to pieces – except for a perfect circle around where Greg and one of his men had been lying. “I realised then that God had stepped in and intervened.”

After finishing that call up, Greg took a month’s holiday to read his Bible. An acquaintance invited 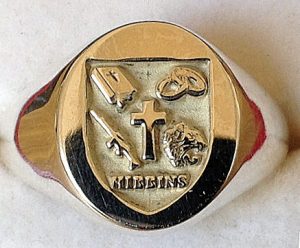 Greg’s testimony ring, featuring a cross, a gun, a lion, a Bible and two wedding rings

him to Salisbury Baptist Church, where he immediately knew he’d found his spiritual home. “I followed the advice of the pastor, John Broom, and started ‘renewing my mind’ by immersing myself in God’s Word. My motto has since become: the Bible says it, I believe it, that settles it.”

Involving himself fully in church life, Greg was soon asked to lead the youth group.