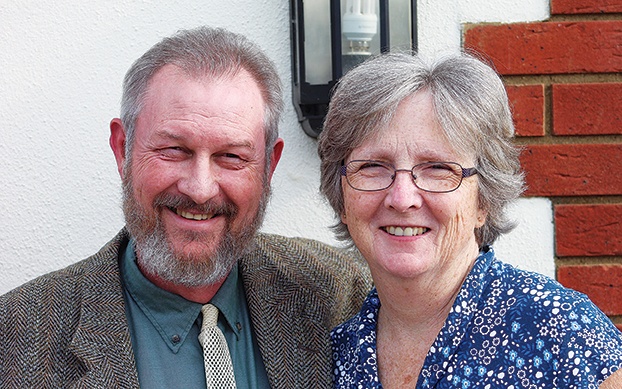 Disinherited at 16 for choosing Jesus over the occult, former special forces soldier Greg Hibbins knows the frightening reality of the occult world and warns those who might dabble in it this Halloween: “Satan wants to get you hooked”

To look at Pastor Greg Hibbins standing in front of his devoted congregation of Christian worshippers today, you’d never guess that he had been intended to spend his life as a fully-fledged servant of Satan.

Today he says, “I can testify to the reality of a loving God who cares for his people. He intervened in my life as a young man who was completely opposed to God in every way.”

By 15 Greg had been groomed to be a spiritist medium and was holding his own séances for adults, where he would go into a trance and different voices would speak out of him. Just before his 16th birthday, Greg was due to hold a ‘coming of age’ séance when he would be taken over completely by evil spirits. That dramatic encounter with forces of darkness would change the course of his life.

“I grew up speaking to spirit guides”

Greg’s mother’s family had been involved in witchcraft for generations, so Greg grew up speaking to ‘spirit guides’ and never questioned whether it was normal.

His mother, Jean, regularly attended the local spiritist church, where people would go to speak, supposedly, to the dead.

Greg was too young to know that the Bible expressly forbids speaking to the dead and when he  became a medium himself, he was to experience demonic voices speaking through him.  His mother had pictures of her own ‘spirit guides’ all over the house.

“I was born with a membrane over my face, a badge of approval in many occult groups,” he says. “From the day of my birth, Mum set me aside to be trained in the occult.”

When he was four, Greg’s parents went through a bitter divorce and fought over custody of him and his brother Angus. Five years later, they remarried for business purposes, buying a large house in what was then Rhodesia. His mother took one wing and his father the other: “They would meet occasionally in the middle for all-out war.”

Greg and Angus had a well-to-do childhood; Greg did ‘upper class’ sports like fencing, shooting and falconry. “But there was no real love; we never even ate a meal together as a family,” he remembers.

Between the ages of nine and 13 Greg was subjected to a horrific form of child sexual abuse, today known as Satanist Ritual Abuse (SRA): “The first time it happened, Mum took me to a satanists’ meeting in a barn, where about 13 adults in long black capes were standing around a big marble altar. They gave me a strong drug to drink to put me in a state of compliance for what was to follow. The adults partook of drugs and drink and their meetings often involved satanic worship and sexual free-for-alls. I’ve never told anyone in-depth about some of the horrific things I witnessed.”

Soon Greg’s mother apprenticed him to a man called Sid, who controlled the local spiritist movement. “I had to read a mountain of study material on meditation, levitation etc. There were also in-house writings; the largest was called the ‘Dark Covenant’ and any and all occult practices became normal to me.”

‘Spirit guides’, which Greg would now describe as demons, used to appear to him: “One manifested as a Red Indian, another as a Chinese man. My teachers said I had an exceptionally high IQ and emotional maturity, which was largely due to the conversations I would have with them,” he remembers.

Although Greg was never allowed near a church (“I knew absolutely nothing about God or Jesus”), his father Wally was “a good C of E man” who wasn’t involved in the occult. “But I’d allowed all Mum’s anger against him to build up a wall between us, to the point where I could barely talk to him,” he says.

When Greg was 15, Wally died of cancer, a result of an ulcer developed as a POW during wartime navy service. Happily six months before Wally died, Greg realised his father loved him and felt able to care for him, carrying him to the bath and washing him.

Just before he turned 16, Greg’s spiritist mentor told him that the night had come for him to be initiated into ‘deeper things’.

Greg says: “I didn’t realise it, but this was the ‘special’ night when I was supposed to be fully demon possessed.”

That evening, just as Greg was going into the trance as usual, he suddenly felt a rising sense of dread: “Something inside me said, ‘Don’t do it!’ So I started fighting against the demonic force trying to take me over.”

Greg was a supremely fit young athlete who sculled for the Rhodesian national team, but wrestling with this invisible force left him feeling exhausted after about 30 minutes: “It had pushed me back so far that I felt like someone behind me was trying to snap my neck. My shoulders had been pulled round to the back of my chair. It felt as if supernatural hands were trying to split me in half.

“Just as it seemed like the force would overwhelm me, I heard myself shout the words ‘God, help me!’. Immediately it let go and I fell to the floor.”

Greg’s fuming mentor grabbed his shoulders and bashed his head against the floor, screaming, “Why did you do that?”

This unsettling event brought up huge question marks in Greg’s mind. “My whole life I’d been told this was the right thing,” he says. “An admiral of the South African Navy, also high up in the occult, had already flown to Rhodesia and interviewed me for the naval academy; he was going to ensure I rose to high rank so I could influence others.”

Little did he know he would soon be forced to make a life-changing decision about the destiny planned for him.