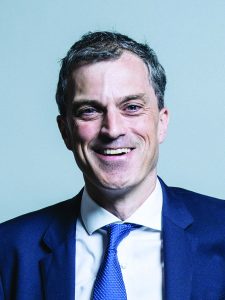 Reassurance: Julian Smith says he will protect the right to traditional views on marriage in N Ireland

Now that same-sex marriage has been made legal in Northern Ireland, Secretary of State Julian Smith has reassured religious groups that their freedom of speech will be protected.

Smith promised legislation for free speech after the Christian Institute threatened legal action if religious liberties were not upheld.

They will be able to sack rule-breakers

According to Premier News, he said that mere criticism will not be regarded as an offence, religious groups will not be sued for refusing to support same-sex weddings and faith-based organisations will be able to sack staff who break their rules by marrying gay partners.

Mr Smith is working with equalities bodies over guidance for employers and schools to ensure that traditional marriage beliefs are respected.

The Christian Institute welcomed the assurances, set out in proposals published by the British government for consultation in January, but said it would be watching to see that faith leaders are not taken to court for refusing to officiate at same-sex weddings.

High Court to decide if kids should be given trans drugs