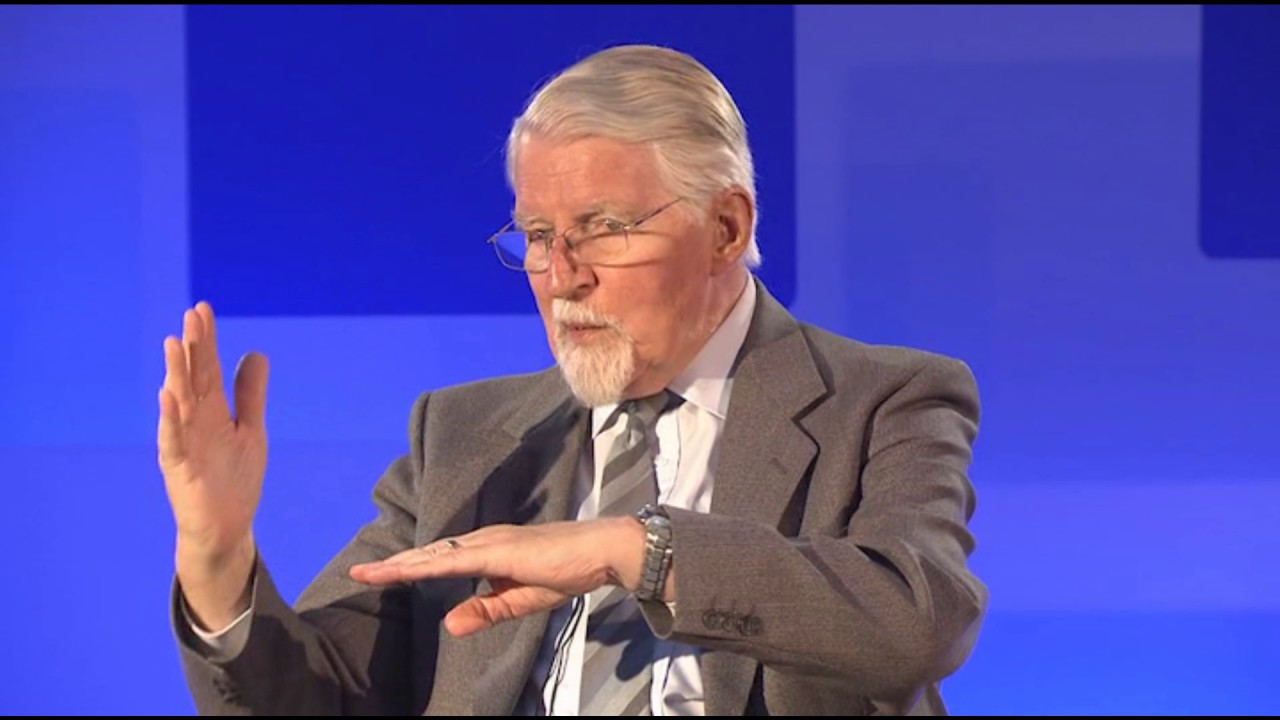 Bible teacher David Pawson remains a household name among UK evangelicals.
Outspoken, often controversial, his remarkable life is testament to his commitment to teach the whole Word of God with uncompromising conviction. His clear expositions of Scripture have benefited believers worldwide.

Now confined to a wheelchair, David lives in a nursing home, having been diagnosed with advanced prostate cancer which has spread to his bones. Despite suffering a serious fall in 2019, he told supporters in a 90th  birthday message in February: “Over this last 12 months, I have continued to gain strength and know now the Lord still has work for me to do – so I’m ready to continue on wherever he leads me… I am just so grateful to everyone for the love and kindness I receive.”

Perhaps David’s greatest gift to the Body of Christ is his book, ‘Unlocking the Bible’, which continues to be a worldwide bestseller.

His passion to help believers understand the whole Bible was birthed when he was a Royal Air Force chaplain in 1957. Realising men liked ‘meat’, he did a series of talks taking the men right through the Bible, to ensure they had a richer diet than a few favourite passages. “We tend to know texts, rather than context.”

Having become uncomfortable with infant christening, he left Methodism early in his preaching career to become a Baptist, where he could practise believers’ baptism by full immersion as a “bath for the dirty and a burial of the dead”.

He was ‘baptised in the Spirit’ just as the charismatic renewal was getting underway in the early 1960s, an experience which closed speaking opportunities at some evangelical gatherings, but revolutionised his spiritual life. While interceding for a church member who had been opposing him and was bedridden with severe hay fever, he found himself praying ‘in tongues’ for the first time. David then went to pray for the man, and in a few days his critic was fully healed and became a close friend.

In his book, ‘Word and Spirit Together,’ he nevertheless cautions against any spiritual experience not based on Scripture: “Theology without experience is barren. But experience without theology is dangerous.”

David’s eclectic combination of convictions, born out of thousands of hours of intensive Bible study, mean he has been “shot at” by Christians on both sides of many issues.

A self-described “unorthodox evangelical”, he disagrees with both the Calvinist position of ‘irresistible grace’ and the stance of some evangelicals that a one-time commitment is sufficient to guarantee entry into Heaven, preferring to see the life of a Christian disciple as a race – being “on the way”, rather than having “crossed a line”.

His love of Israel began when he visited for the first time in 1961. After reading a book by Arthur W Kac, ‘The Rebirth of the State of Israel – Is It of God or of Man?’, he describes “a blazing light” being switched on: “To say I was flabbergasted when I read it would be an understatement. How had I missed such a vital element in God’s purposes?”

This led him to espouse Christian Zionism, although he rejects dispensationalism, which he terms “reverse replacement” theology – the belief that the Church will be raptured and its earthly mission taken over by Israel. He also believes that Christians will be on earth for the tribulation, claiming that “much of the Church believes in escapology rather than eschatology!”

Other aspects of church life he has warned about include casual worship (“a lot of worship I attend… is little better than a disco”), evangelical liberalism (for example, teaching that hell is not everlasting torment), declining standards (he disagrees with remarriage after divorce) and feminisation of leadership (he had a file of grateful letters for his book, ‘Leadership Is Male’, all from women).

With many divorcees and remarried couples in churches, not all share David’s views on divorce and believe God has a more merciful stance.

In 2002, David delivered a sobering prediction that England will become Islamic. He suffered a stroke affecting his mouth and throat before he delivered the message, in which he warned of “a backlash against the anarchy and disorder of an amoral society”.

A teacher of teachers

David Pawson entertainingly described his long career in his autobiography, ‘Not As Bad As the Truth’.

Born in 1930 into a Christian family (his father was a lay preacher who led family prayers), David studied agriculture at Durham University.

When God intervened and called him to the ministry, he went to the Shetlands in 1950 as a Methodist lay preacher for a year, before completing an MA in theology at Wesley House, Cambridge. He spent a year working in Yorkshire with the Methodist Home Mission Department before becoming a chaplain in the Royal Air Force for three years. He married Enid in 1956 and they had a son and two daughters; tragically, one daughter passed away aged 36.

After leaving Methodism and joining the Baptist Church, David pastored Gold Hill in Buckinghamshire from 1961 to 1968. Here he instigated the successful experiment of reversing the order of the Sunday service to have the sermon first, then the worship, based on the early Church model.

In 1968, he and Enid moved to the Millmead Centre in Guildford, which became the largest Baptist church in Britain, with attendance double the membership number.

Over the years, he has written a large number of books, booklets and daily reading notes. Millions of his messages have been distributed in over 120 countries.