But we know Someone who holds the future in His hands!

LONDON, April 25th 2019 – With the climate change protestors bringing London to a standstill in a bid to save the planet, and despairing Brexiteers having virtually given up hope of saving the kingdom from European predators, is there any future for us?

Yes, assuredly so, if we look to the rock from which we were hewn (Isaiah 51.1); to the One from Israel who brought us salvation. Jesus is doing a new thing in the land that gave him birth, and it carries a message of peace for us all.

What? Peace! You’re telling me Israel has a lesson of peace for us with all the bloodshed that is being spilled in the Middle East? Bear with me.

As many in the UK have had their fill of squabbling politicians, so in Israel talk of peace is being treated with contempt.

After decades of negotiations surrounding the ‘peace process’, most Israelis realise that they have no genuine partner with whom to make peace – and no longer believe peace is possible.1 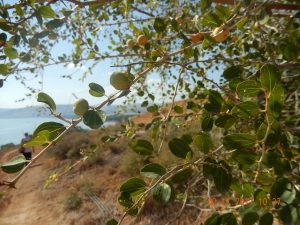 Congregations of believers are meeting all over the land where Jesus once walked, as on this hillside above Galilee. Picture: Charles Gardner

But there is a peace being enacted right before their eyes in the form of believers in Yeshua (Jesus) – both Jew and Arab – who are embracing one another out of a common love for the Jewish Messiah.

Congregations of such believers are meeting all over the land where Jesus once walked, and have become the ‘one new man’ referred to by the Apostle Paul in a letter to the early Christians, thus:

“For he himself (Christ) is our peace, who has made the two one and has destroyed the barrier, the dividing wall of hostility…” (Ephesians 2.14)

When Jesus died on the cross, he broke “the dividing wall of hostility” between man and God, and between Jew and Gentile. The barrier has been well and truly smashed, and I have witnessed the beautiful reality of this on several occasions, both in Israel and in Britain.

I have also just written of an Arab woman brought up to hate the Jews who, since finding freedom in Jesus, says: “I love the Jewish people because it is their God and their Messiah I’m following and he told me to love them.”2

When Moses was about to lead the Israelites through the Red Sea, he told them: “Do not be afraid. Stand still and see the salvation (literally Yeshua) of the Lord (Yahweh).” Jesus means salvation; it still does, and it’s where true peace has been won!

Instead of peace, however, many people – even in Israel – are being taken in by hypocrisy. Speaking of discriminatory apartheid-type laws denying basic rights to Palestinians in Lebanon, Israeli Arab journalist, lecturer and filmmaker Khaled Abu Toameh writes: “Palestinian leaders do not seem to care about the suffering of their people at the hands of Arabs. Yet these same leaders are quick to condemn Israel on almost every occasion and available platform.”3

And Bassam Tawil of the Gatestone Institute points out that payments to terrorists and their families lie at the heart of Palestinian incitement to terror that drives the conflict there. For they are entitled to full salaries that are denied to others!4

Here in Britain, meanwhile, we are suffering the effects of political appeasers kowtowing to a godless monstrosity supposedly set up to ensure lasting peace in Europe instead of challenging the tin-pot dictators in defence of democracy, decency and sovereignty, as Churchill would have done.

Plumbing the depths of insanity, they have the gall to push ahead with an election to this body – three years after the public voted to leave it, and at a colossal cost of £100 million-plus.

This is surely a political circus led by clowns – a humiliating, soft-touch approach so lame that it opened the door for climate change ‘warriors’ to pounce on the fast-rotting carcass of democracy to have their say on an issue no-one (but God) can do anything about.

The Bible tells us that “the earth will wear out like a garment” (Isaiah 51.6) and that the real Saviour of our planet, the Lord Jesus Christ, will one day usher in a new heaven and a new earth. (Revelation 21.1)

Meantime these anarchists are putting the country in grave danger of a terrorist strike as police resources are diverted elsewhere and more than a thousand arrests are made.

Yes, I get their inane argument that long-term salvation for the planet is worth short-term chaos, leaving my brother – a victim of the 7/7 terror strike in London – forced to make an annoying diversion to get to work.

Writing this on ANZAC Day, when Australia and New Zealand remember the bravery of their soldiers in past conflicts, I conclude with the hope that sanity will prevail and we return as a nation to battles really worth fighting.

2News & Views, newsletter of CMJ Israel. Testimony also available on YouTube courtesy of One for Israel at https://youtu.be/hRRY-bN28uA