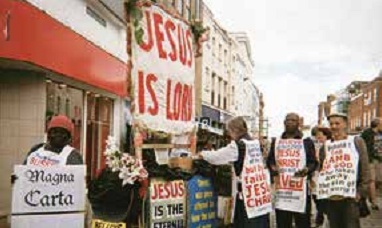 How Magna Carta stopped rulers meddling in the Church

The scene in our photo sent in by a Gloucester reader is more peaceful than the dramatic confrontation of a despot King and exasperated barons at Runymede in 1215, but in their own way they made a stand for the freedom to read the Bible in public at a time when street preachers are being arrested.

The freedoms won through Magna Carta made British democracy the envy of the world. Lord Denning, former Master of the Rolls called Magna Carta “The greatest constitutional document of all times – the freedom of the individual against the arbitrary power of the despot.”

Magna Carta (or ‘great charter’) established that no-one is above the law, and perhaps most significantly to Christians that ‘the English Church shall be free, and shall have its rights undiminished and its liberties unimpaired.”

No wonder that Christian campaigners are now pointing out that those principles are under threat through proposed laws on freedom of speech.

The Christian Institute has sent its supporters an excellent leaflet giving Magna Carta’s history and outworking through key moments in British and US history.