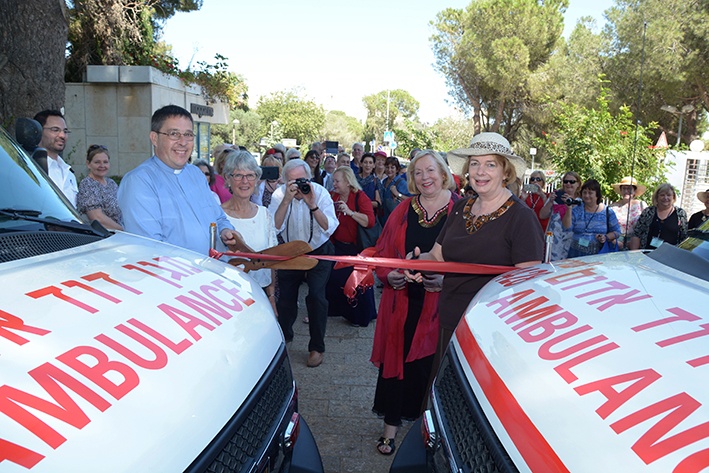 During Israel’s turbulent birth period in spring 1948, one particular atrocity which the British failed to prevent was the Hadassah Convoy Massacre. Two ambulances were blown up and 79 people killed. These included doctors, nurses, students, patients, Hebrew University faculty members, Hagenah fighters and a British soldier.

To mark this sombre date among the others of Israel’s 70th anniversary, British Christians donated two more ambulances to the people of Israel.

The ceremony, organised by Christian Friends of Magen David Adom (CFMDA – Magen David Adom is the Israeli equivalent of the Red Cross), was held on Mount Scopus, adjacent to the actual location of the tragedy.

Around 60 guests came, including former Ambassador to the UK, Daniel Taub, Barbara Goldstein, Deputy Director of Hadassah Office in Israel, Sir Ian Gainsford, President of MDA and Christine Darg of Jerusalem Channel TV, along with her tour group.

Barbara Dingle, Executive Committee member of CFMDA, commented, “While we mourn the tragedy of the massacre, we are truly thankful to all our supporters around the country who have made this remembrance possible and in some small way, righted a wrong from the Mandate era.”

Meanwhile a video of the Israeli first-responder organisation, United Hatzalah (“united rescue” in Hebrew) has been viewed 400,000 times in one week in November.

Produced by the popular Israeli-Arab vlogger, NAS Daily, it shows how 3.5 million people have been helped by volunteer First Aiders who arrive in about 90 seconds of an emergency call by motorcycle and keep patients alive until an ambulance arrives.

Founder Eli Beer now has 5,000 highly trained volunteers on ‘ambucycles’, an inspired solution in traffic-clogged cities. Eli says, “Think of it like Uber, but we save lives.”

Particularly touching is the fact that the organisation is non-political, using Jewish, Muslim and Christian volunteers and Eli’s own father’s life was saved by a Muslim volunteer.

Viewers have expressed interest in setting up their own versions of the Israeli life-saving model in their cities and communities, particularly in India, the Philippines and various cities in the US.