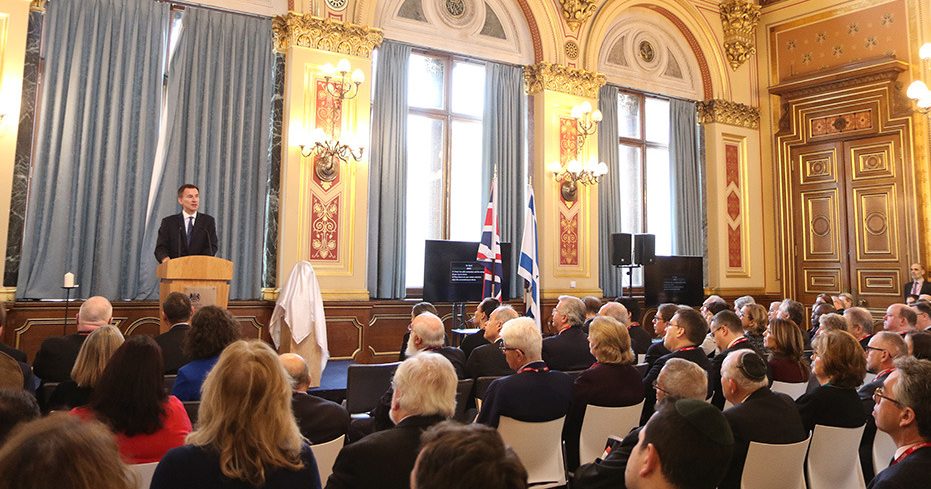 What price oil? Brexit could free us from  the ‘unholy alliance’
that  grinds down the Middle East’s only democracy

Our attempts to leave the European Union have brought unprecedented turmoil in our Parliament.

The eight months up to March saw several resignations from the Cabinet and, more recently, 11 pro-EU MPs from both sides of Parliament resigned from their parties to form TIG (The Independent Group; TIGgers don’t like anti-Semitism or Brexit).

In the fast-moving final weeks before the legal leaving date of 29 March, the government seemed to be not only deeply divided, but out of control, with many MPs working towards a ‘Brexit in name only’, and others trying to thwart it altogether.

One wonders if what we are seeing has anything to do with our handling of the nation of Israel?

There is no doubt that the Lord used our nation to facilitate the rebirth of the Jewish nation in her biblical homeland. More than a decade ago now I made a documentary on this very subject with my Australian friend, Kelvin Crombie, called ‘The Destiny of Britain’. The film’s thesis was that Britain’s destiny in the purposes of God was for the British Empire (which of course included Australia and New Zealand) to be the ‘Cyrus nation’ that would bring about that restoration.

In a spiritual sense, the Balfour Declaration was the result of that calling.

You may well ask, “What has Brexit got to do with Middle East politics?” Strangely enough, there is a spiritual connection because Britain has reaped judgement from God, I believe, since she violated the Mandate on almost every single level.  Sadly, in the end, the nation of Israel was reborn in spite of us rather than because of us.

While Australia was the first nation to vote for the UN Partition Plan of November 1947, Britain abstained, and the Arab nations rejected it altogether. Nonetheless, 33 nations were in favour and just 13 against, so the State of Israel was born on 14 May 1948.  The Arabs living in Palestine lost their moral and legal right to a state of their own as a result of that rejection and of the illegal invasion on 15 May 1948 designed to annihilate the nascent State of Israel. (It is illegal in international law to invade a foreign country with the aim of seizing territory).

During this attack, the Hashemite Kingdom of Jordan invaded and illegally occupied, backed by Britain, most of the territory that would have become the second ‘Palestinian’ state. (The first one was Transjordan, the land east of the Jordan River, which was part of the Mandate for Palestine but which was closed to Jewish immigration, this being legally endorsed by the League of Nations in 1922. The new Kingdom of Jordan later gained independence as a state in 1946).

This seizure of land by force, including the Old City of Jerusalem, was not only a violation in principle of the 1922 Mandate for Palestine, but it was also illegal according to Article 2 of the United Nations.  Over the next 25 years, Israel fought a series of defensive wars, and in 1967 regained all of the territory seized illegally in 1948, plus more.  Then in 1973 another war to annihilate the Jewish state was launched by Egypt and Syria, which Israel eventually won.

Following the Yom Kippur War of 1973, the OPEC nations who were members of the Arab League

imposed an oil embargo, holding the nations of the West ‘over a barrel’.

The EU, which was then the European Economic Community, and which Britain was in the process of joining, was one of their main targets, and the result was devastating.  People who were living in Britain at the time will remember the ‘3-day working week’ and the blanket 50mph speed limit across the country to conserve fuel, among other things.

The price for the restoration of the oil flow was capitulation to the Arab political agenda.

An official Euro-Arab Dialogue (EAD) was formed, in line with France’s existing pro-Arab policy, and an agreed common EEC Foreign Policy regarding the Middle East was established during the 1970s and into the 1980s.

This policy is obligatory on member states of the European Union to this day if they are to have favourable economic relations with the Arab world.

Basically, the European nations decided that there has to be a Palestinian state with ‘East Jerusalem’ as its capital, no matter what, even if it means the demise of the Jewish state.

The deceptive dogmas which are now accepted across the Western world – with the exception of the US – are listed separately here.

The most recent meeting of the League of Arab States and the European Union was held in Sharm El-Sheikh on 24 and 25 February.  British Prime Minister Theresa May was present, together with Donald Tusk, President of the European Council, and other European leaders.  Item 7 of the Joint Communiqué stated (in part):

“We reaffirmed our common positions on the Middle East Peace Process, including on the status of Jerusalem, and on the illegality under international law of Israeli settlements in the occupied Palestinian territories…”

I am often reminded of Josef Goebbels’ quotation that “if a lie is repeated often enough, then the people will believe it.”

First, the settlements are not illegal under international law, especially as Israel has a perfectly legal sovereign claim to all of Judea and Samaria.

Second, the territories referred to are not “occupied” under the law of Belligerent Occupation – particularly in reference to Article 49(6) of the Geneva Convention.

Third, there is no binding agreement in international law that designates the territories concerned as belonging to ‘the Palestinians’ as the Final Status Agreements under ‘Oslo’ have not been completed.

The same deception applies to what comes out of the United Nations and the international media.  The forthcoming parts of  ‘Whose Land?’ will deal with all of these matters.

The destiny of Britain

About six months before the June 2016 referendum, a very dear friend of mine, David Noakes, was given a prophetic word from the Lord that he is going to bring judgement upon the European Union, and if we were to avoid that judgement, then we need to be separated from the EU. I do believe that Isaiah 60:12 is highly applicable in this case: “For the nation and kingdom that will not serve you shall perish, and those nations shall be utterly destroyed.”

As a full member of the European Union (at the time of writing) Britain is currently locked into the foreign policy established by the Euro-Arab Dialogue following the 1973 Yom Kippur War, which means that Israel will have to live with indefensible borders side-by-side with a hostile Palestinian state dedicated to its destruction.  Can you imagine what might happen if a future European Union Army were to invade Israel in fulfilment of the great end-time gathering against Jerusalem prophesied by Zechariah?

If Britain is to have any chance of repenting of our betrayal of the Mandate and the Jewish people, and once again enter into the ‘Cyrus call’ that God gave us as a nation, then we need to cut all political and spiritual ties with the European Union. Britain is in an unholy alliance, and we need to get out. We are on the verge of it.

This is a spiritual battle for Britain, so let us keep looking to, and trusting in, the Lord for his victory in the face of all that we see and hear.

Glimmers of light in the darkness

Recent weeks have seen some glimmers of light in the British government’s attitude to Israel. In fact, according to former Labour MP Ivan Lewis this March, “the current UK government has been incredibly supportive of Israel.”

During a Holocaust Remembrance Day event in the Foreign and Commonwealth Office in January, Israeli Ambassador Mark Regev made the comment that if the State of Israel had been born in 1938 instead of 1948, many, many Jews would have survived the Holocaust.  Foreign Secretary Jeremy Hunt picked up on the Ambassador’s statement and admitted that the policy of the 1939 White Paper was morally wrong.

He told us, “That was one of the darkest moments of our history.”

To my knowledge, this is the first time a British Foreign Secretary has ever made such an admission.

The next encouraging event is that the first post-Brexit Trade Agreement that Britain has signed is with Israel! And finally, at last, the government has declared that Hezbollah is a terrorist organisation in its entirety. That makes any representation of, or financial transaction with Hezbollah in this country illegal.

We give thanks to God for these ‘starters’ and will continue to pray for further moves that will set our country free from the ‘unholy alliance’.

For over 20 years Hugh Kitson has been making award-winning documentaries about God’s purposes for Israel as revealed in the Scriptures. These are available from www.hatikvahfilms.com.

His latest project is ‘Whose Land?’ – a trilogy of films looking at the legitimacy of the State of Israel in international law. These unique documentaries feature in-depth interviews with a team of highly qualified lawyers and historians. They are presented by Colonel Richard Kemp CBE. Part 1, ‘Foundations’, is available from www.whoseland.co.uk. Parts 2 & 3 are still in production.

The history of the Euro Arab Dialogue is thoroughly set out in Bat Ye’or’s book, ‘Eurabia – The Euro-Arab Axis’.