Why are Christians so uncomfortable over the issue of Israel?

It is easier to raise money for charity among Christians than to arouse interest in the plight of the Jews. A shocking statement, you might think. But I will come to that.

On September 4, a British delegation expressed its sorrow and shame at a ceremony marking the 90th anniversary of the Hebron massacre, when our officers did virtually nothing to stop a brutal Arab uprising that left 67 Jews dead. 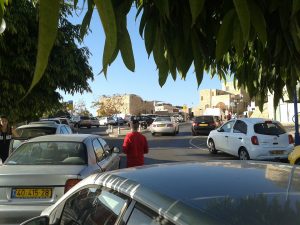 Christianity is Jewish: It was only after a rooftop vision received near here in the ancient port of Joppa (now Jaffa) by the Apostle Peter that the gospel first spread to the Gentiles (Charles Gardner)

The cowardly response of the British, given responsibility to prepare the region for Jewish self-rule, was acknowledged by the group representing Love Never Fails (an umbrella organisation for Israel-supporting ministries in Britain) by laying a wreath, declaring in English and Hebrew: “In sorrow and shame we recognise that officers of the British administration neglected their duty to protect the Jewish citizens of Hebron during the Arab uprising of 1929.”

Worse still, the survivors were forced to abandon their homes, meaning that one of Israel’s most ancient Jewish communities ceased to exist.

The tragedy is that little has changed. Jews the world over are the victims of violence on an almost daily basis. Among their neighbours, it is virtually state-sponsored, by which I mean that the Palestinian Authority (which many countries want to recognise as a state) and the Hamas-led rulers of Gaza are publicly encouraging such action in their vicious determination to rid the region of Jews.

And yet these are the people who, in fulfilment of God’s word to Abraham that all nations on earth would be blessed through him (Genesis 12.3), have brought untold riches to the world with their amazing skills, their precious Scriptures, and especially through the Jewish Messiah, Jesus Christ.

But the world continues to treat them with the utmost contempt while the church, which would not exist without them, shows little or no interest in their welfare.

I am deeply frustrated by this sorry state of affairs. And I am not alone. My friend and colleague David Soakell, a leading light with Christian Friends of Israel, has expressed similar feelings in his regular online newsletter Watching Over Zion1 where he opens up about the ‘tough call’ of advocating for Israel – even at Christian festivals where CFI try to interest believers in their work.

One enquirer asked him ‘why he believes what he believes’ about Israel (that God still has a great plan for the nation etc). And he responded by sharing how God had called him to this work in the midst of caring for orphans in Romania – some dying of AIDS – in the wake of Ceausescu’s brutal dictatorship, which he admits was a heart-breaking time.

But it was during this traumatic period that he clearly heard the Lord’s call to help his chosen people. “Yet looking back, raising help for dying children was relatively easy. Show the church, or even the secular world, photos of dying children, and aid comes pouring in. Tell the church about Israel… now that’s a tough ask.”

I share David’s feelings. It’s hard work arousing the interest of Christians in Israel. You would think sometimes that you were offering them a snake, and you get the sense of people keeping their distance from you for fear of being lured into highly questionable pursuits. The unspoken question being: What has Israel to do with the church?

Well, apart from being mentioned 2,581 times in our Scriptures, you mean?

Like David, I also found myself in this ministry through a distinct call from God. Meditating on chapters in Isaiah on a rainy day during an autumn break by the sea, I heard him say, as clear as if it were audible: “I want you to be a helper of Israel.”

But, yes, there are political ramifications because, if we believe the Bible is God’s authoritative word, how can we not support a Jewish state that is a fulfilment of so many biblical prophecies? For the prophets repeatedly speak of the reality of Israel’s restoration to their land in the last days (e.g. Isa 11.11, Isa 43.5f, Jer 31.10 & 37, Ezek 36.24-26).

Not only to their land, but also to their Lord. Jews, all over the world, are recognising Jesus (Yeshua in Hebrew) as their Messiah in increasing numbers, also in fulfilment of prophecies like Zechariah 12.10, Romans 11.26 and Revelation 1.7.

They have been under the cosh for long enough. Now anti-Semitism is as rife as it was in the 1930s and my friend David, once a Labour supporter, has abandoned the party over its failure to deal with the issue.

The church, meanwhile, in view of its overall silence, is not without blame for failing to speak up. And the answer to the question posed in the sub-title of this piece is – above all – sheer ignorance of the Scriptures.

It’s time for us to declare that Israel’s day of mourning is over – that their day of salvation has come and that, as Isaiah prophesied, they will go out in joy and be led forth in peace (Isa 55.12).

“…For my salvation is close at hand and my righteousness will soon be revealed.” (Isa 56.1)