As a lifelong supporter and one-time candidate of the Labour Party, Rev Alex Jacob is shocked and ashamed by its association with anti-Semitism.

The UK’s chief executive officer of the Church’s Mission among Jewish people (CMJ), an international Anglican society co-founded 210 years ago by William Wilberforce, Rev Jacob has written to party leader Jeremy Corbyn about the issue on a number of occasions, but has yet to receive any reply or acknowledgement. 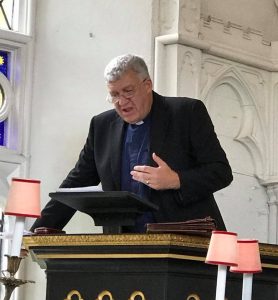 He has even offered to meet with Mr Corbyn and share his insight, warning that his leadership, along with the future success of the party, rest upon this issue, and that time was running out for decisive action to expose and uproot those individuals responsible for fanning the flames of anti-Semitism.

Conceding that he is clearly informed and shaped by his current position with CMJ, Jacob assured Mr Corbyn that he was writing in a purely personal capacity and that his concern was not fuelled by any anti-Labour sentiment or wider political agenda.

He acknowledges that anti-Semitism has a variety of sources including Christian circles which have “at times been seduced by misplaced theology and poor pastoral practice”.

Nevertheless, some of his work colleagues and other contacts had expressed surprise at and even challenged his involvement with Labour, especially in light of its current problems. But he has rightly pointed out that Labour has traditionally been a great supporter of Israel.

“Many of the early pioneering Zionists were strong socialists and, alongside this, the struggle for the full emancipation of the Jewish people was often linked to members of the emerging Labour and Trade Union movements, who saw this as a foundational issue of social justice.”

He further wrote that today’s party includes some outstandingly diligent Jewish MPs and councillors, that Labour had a strong and respected record of fighting fascism and is even committed to a just settlement of the Israeli-Palestinian conflict in which Israel can flourish within secure borders.

But such points are often obscured by images of Labour supporters waving Palestinian flags and singing songs calling for the total annihilation of Israel.

He commends Shadow Foreign Secretary Emily Thornberry for her recent comment that “…there are sickening individuals on the fringe of our movement who use legitimate support for Palestine as a cloak and cover for their desperate hatred of Jewish people and their desire to see Israel destroyed.”

And he adds: “Clearly, I would argue that such individuals must be identified and, after due process, expelled from the Labour movement. This must be a priority for you; time is running out for you to act decisively and expose and uproot such anti-Semitic individuals. I am sure that your leadership and the future success of the Labour Party rest upon this issue!”

Meanwhile virtual civil war has broken out within the party as it comes under increasing pressure – even from its own deputy leader Tom Watson – over its failure to deal effectively with the problem.

A BBC investigation for its Panorama programme has thrown further shocking light on the subject with the help of whistle-blowers who have in turn provoked fury from colleagues amidst accusations of BBC bias while Labour officials are accused of displaying ‘Stalinist levels of paranoia’.1

The documentary aired allegations of interference by Mr Corbyn’s closest aides into the party’s complaints procedure. One official said her party was no longer a safe space for Jews after she was told ‘Hitler did not go far enough’.2

Izzy Lenga, who is Jewish, said she had heard Labour members denying the Holocaust in party meetings. Others told the programme how they had been called a ‘dirty Zionist’, a ‘Nazi’ and a ‘Jewish pig’ by members.3

In the light of Rev Jacob’s contribution to the debate, it might be helpful to retrace our historical steps to the founding in 1809 of the mission he now leads.

Evangelical leaders acted on the biblical call to preach the gospel “to the Jew first” (Rom 1.16) with the arrival in London’s East End of Jewish refugees from the pogroms of Russia – including the ancestors of Harry Potter star Daniel Radcliffe, who will be appearing on the popular BBC TV programme Who Do You Think You Are? on Monday night (July 22nd).

Also motivated by their debt to the Jewish people for the Scriptures, and their Messiah, CMJ’s work expanded throughout Europe, North Africa and the Middle East. And in focusing on Israel’s spiritual restoration repeatedly prophesied in the Bible (Jer 31.33, Ezek 36.26, Zech 12.10, Rom 11.26), they also helped prepare the way for the Jews’ return to the land from which they had been exiled for so long – this too in line with biblical prophecies.

Because it is there – in the Promised Land – where Jesus will return as King of Kings and finally be recognised by those who pierced him. This is God’s great plan, and world events are rapidly heading towards its fulfilment. But the devil and his hordes will do everything to prevent that happening, which is why such a fierce battle is being fought over Jerusalem, and Israel, and why anti-Semitism is once more on the rise.

The psalmist predicted this some 3,000 years ago with these words: “See how your enemies are astir, how your foes rear their heads. With cunning they conspire against your people; they plot against those you cherish. ‘Come,’ they say, ‘let us destroy them as a nation, that the name of Israel be remembered no more.’ O God, do not keep silent…Let them know that…you alone are the Most High over all the earth.” (Psalm 83.2-4, 1 & 18)

He won’t keep silent. He will wipe away every tear when he comes again, and there will be a new heaven, a new earth, and a new Jerusalem! (Rev 21.1-4)