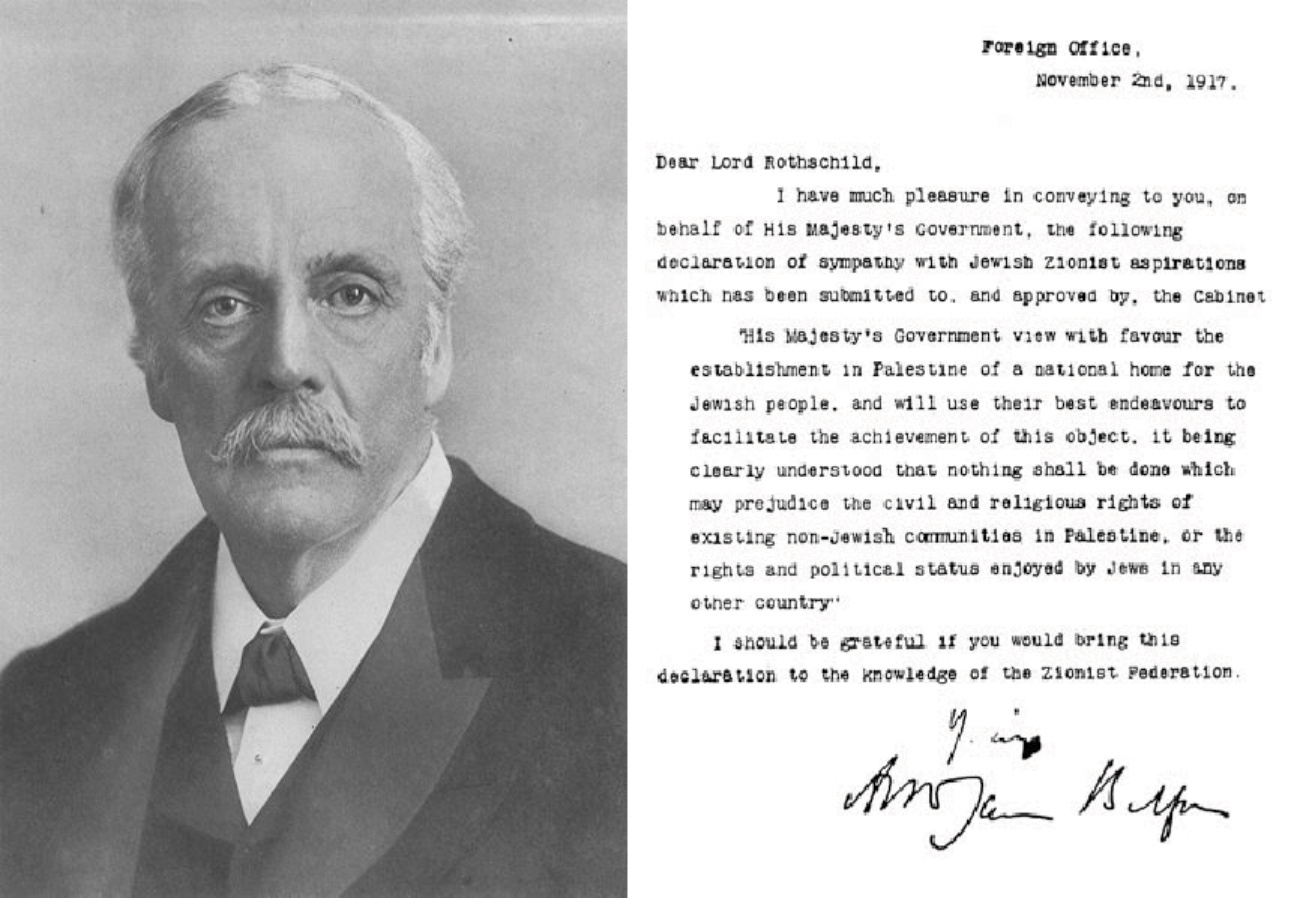 There are many centenaries to be marked at the moment, as we progress through 100 years since the 1914-1918 “war to end all wars”.

One of the most significant is in November 2017, the centenary of a political expression of intent made in the midst of wartime strategy that went on to become one of the most influential yet controversial documents in 20th century history.

On 31 October 1917, Britain’s War Cabinet agreed the final wording of a letter to Lord Rothschild and the Zionist Federation. Named after its signatory, Foreign Secretary Lord Balfour, it expressed approval for establishing a home for the Jewish people in the area that was biblical Israel but was then known as Palestine:

“His Majesty’s Government view with favour the establishment in Palestine of a national home for the Jewish people, and will use their best endeavours to facilitate the achievement of this object, it being clearly understood that nothing shall be done which may prejudice the civil and religious rights of existing non-Jewish communities in Palestine, or the rights and political status enjoyed by Jews in any other country.”

Five years after it was written, the League of Nations wrote it into international law as part of the post-war peace talks and mandated Britain to establish a Jewish homeland.

Britain struggled and ultimately failed in this and in 1948 handed responsibility for the mandate to the newly-formed United Nations. Since this body inherited all previous legal arrangements from the League of Nations, the words and intention of the Balfour Declaration are still in force today.

The Declaration was agreed by men who were mostly evangelical Christians. This was a War Cabinet who believed the Bible’s promises about the return of the Jewish people to the land of Abraham, Isaac and Jacob. This belief had its roots in the Protestant Reformation 500 years earlier when the Bible was translated into English for the first time and people could read for themselves prophecies about Israel’s return to the Promised Land.

Indeed, some would assert that the primary motivation behind the Declaration was the biblical understanding of the evangelical Christian Cabinet ministers, rather than British interest. Guest speaker Rev David Schmidt spoke of this to over 120 guests at a ministers’ lunch held to launch the Balfour centenary at London’s City Temple in late January.

By the 19th century preachers like Charles Spurgeon and Bishop J C Ryle taught the restoration of the Jewish people, while prominent Christians such as William Wilberforce and Lord Shaftesbury encouraged government to respond.

They longed to see the return of Jesus Christ but knew that, before this could happen, the Jews had to be back in their own land. This belief was based on Old Testament passages foretelling Messiah’s appearance in Jerusalem to a restored Jewish people.

They prayed and campaigned for what seemed impossible – the land where Jesus had walked was under Muslim Turkish control and the Jewish people had been scattered for 1,800 years.

Then, in 1896, Austrian Jewish journalist Theodor Herzl, incensed at the anti-Semitism he witnessed in Paris (particularly the notorious Dreyfus affair), set out his vision of a Jewish State in his pamphlet, Der Judenstaat, as the only long-term solution for the survival of his people.

Herzl thus launched a movement known as Zionism and also became friends with an evangelical Christian minister, Rev William Hechler, whose high-level contacts as a diplomatic chaplain in Vienna enabled him to reach influential leaders including the Kaiser.

Historians have noted that without Hechler’s support and encouragement, Zionism might never have been birthed as a political movement.

Another partnership between Jew and Gentile was key to the furtherance of the dream of a revived Jewish homeland. Chaim Weizmann was a highly respected scientist who had emigrated to Manchester in 1904 from his native Germany. During World War I he developed acetone, an important ingredient for explosives, which brought him to the attention of the British Government and Lord Balfour, with whom he had already become friends.

Scottish-born Arthur Balfour was Foreign Secretary and an evangelical Christian. Weizmann persuaded Balfour, perhaps without too much difficulty, of the case for a homeland for the Jewish people.

Britain’s strategic needs, burgeoning alliances with Arab leaders and the clear justice of the Zionists’ dreams coalesced on 31 October 1917 when the War Cabinet sent the historic letter to Lord Rothschild and the Zionist Federation, which was to become known as the Balfour Declaration.

Another event took place that same day which was key to the intentions expressed in the Declaration. General Edmund Allenby won a significant battle against the Turks and Germans for the desert town of Beersheva, south of Jerusalem. Without Balfour’s plan for restoration of the Jewish people to Palestine, this victory might have been no more than a footnote in history.

Five years later, the Balfour Declaration was incorporated into international law at San Remo in Italy and formed part of the British Mandate for Palestine.

This is why Christians, along with the Jewish community, are celebrating the centenary of this short but vital document which encouraged the most persecuted people in history to return from the nations to the land they had prayed and sung about for two thousand years.

Other resources showing the geo-political circumstances 100 years ago include the DVD From Exile to Restoration (Hugh Kitson and Kelvin Crombie) and Gallipoli: The Road to Jerusalem (book and DVD by Kelvin Crombie)

Lord Arthur Balfour was Foreign Secretary in 1917. Balfour’s backing for this declaration of support for Zionism was heavily influenced by his evangelical faith.

General Lord Allenby, a Bible-believing Christian, led the Commonwealth force that seized Beersheva from the Turkish-German Army on 31st October 1917 and opened the way to Jerusalem. Without this victory, which took place on the same day the Balfour Declaration was agreed in London, the Declaration would have had no effect.  Photo is a re-enactment.

Rev Nick Gray is minister of an Elim church in Croydon. The Balfour 100 working group is a team of Christian ministry leaders co-operating with leaders in the Jewish community to mark the centenary on November 2 this year. A pdf leaflet is available at www.balfour100.org where print copies can also be ordered.