THE TRUTH IS OUT THERE – AND IT’S ON THE BUSES! 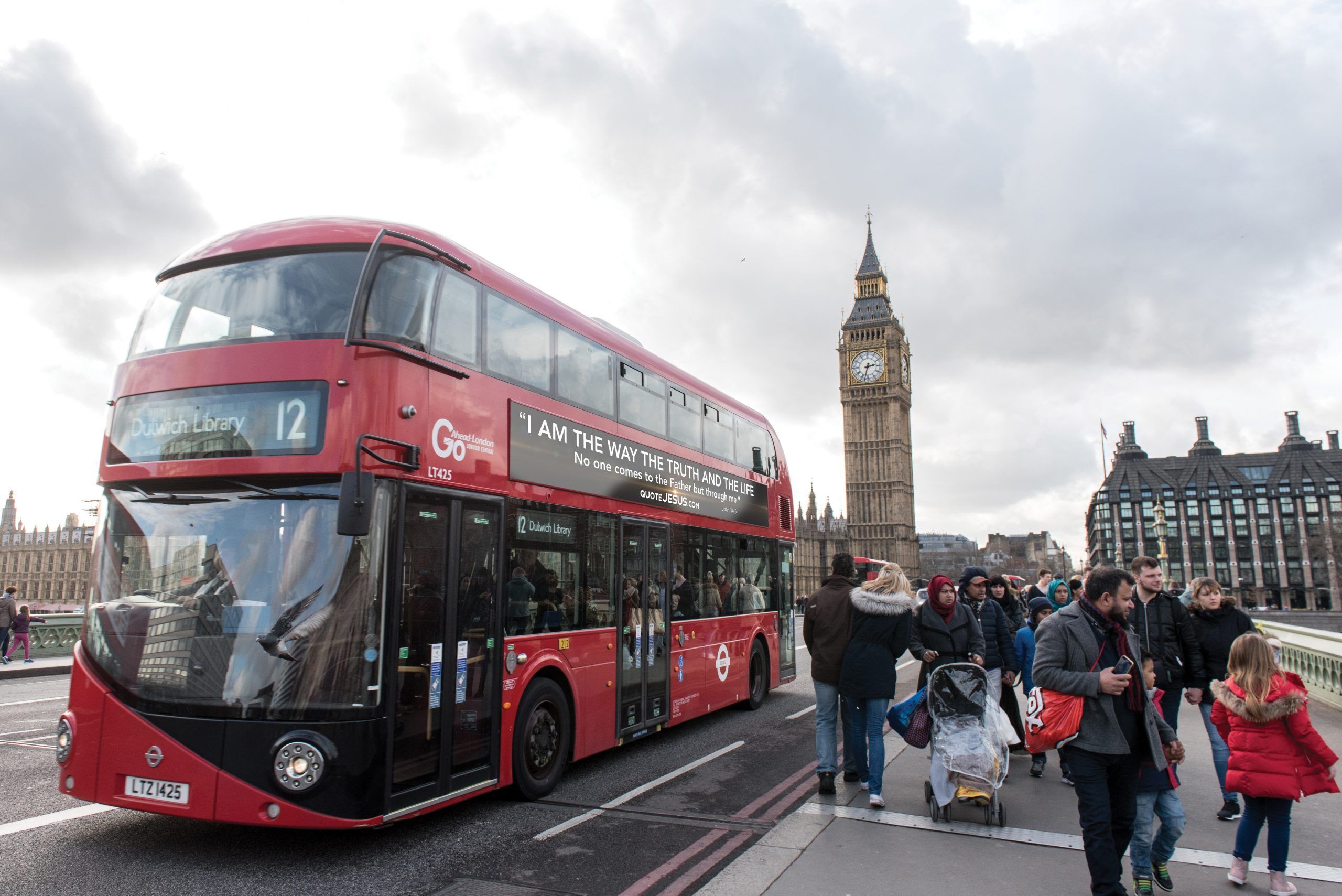 While Londoners were recovering from the Westminster terror attack, many will have gained hope from a major campaign that used London buses to advertise the words of Jesus. Starting from 10 April, Routemaster buses carried huge banners quoting directly from the Bible.

Although it’s probably an exaggeration to call London’s familiar red buses ‘iconic’, this time they carried the words of a real icon.

The campaign was the vision of Howard Conder, founder of Revelation TV, who said: “In the wake of the Westminster attacks it is clear that hope, or to be precise the lack of hope, is becoming an issue in this generation. We think the Bible has a lot say about ‘hope’, and our vision for this campaign is to influence the hearts, minds and perceptions of this generation, to offer them hope and faith for a better future.”

The Quote Jesus campaign came at the same time as the Health Select Committee revealed that 4,820 suicides took place in 2015 and vowed to do more to address this alarming statistic. (Reported in HEART’s April/May issue).

A poll by The Guardian this March also found that a quarter of young men had turned to self-harm to deal with difficult emotions, and another quarter had considered it. Against this backdrop, Quote Jesus sought to bring Jesus’s words of hope to many people struggling in this generation.

For two weeks quotes of Jesus including; ‘Everyone who lives and believes in me will never die’, ‘In my Father’s house there are many mansions’ and ‘I am the way, the truth and the life’, appeared on 75 Routemaster buses around the capital.

Conder continued: “It was second nature to attend church when I was growing up, but today how many people know that Jesus said, ‘Do not worry for each day has enough worry of its own’ or ‘Come to me all that are weary and burdened and I will give you rest’?”

Conder believes that “The Bible is a book of hope and this generation is missing out because it has little knowledge of what the Bible has to say”.

News of the pilot campaign has spread quickly and endorsements have been received from Christians in America, Australia and many parts of the UK. Plans are in place to expand the campaign to other locations, both in the UK and around the world, utilising buses and other advertising media.

Conder said the inspiration for Quote Jesus came from his personal experience. “Growing up in the sixties and being involved in the music scene I was exposed to many influences, but the words of Jesus made sense and had the biggest impression. I want people to experience what I did and understand that there is hope, both for ourselves and for a better world.”

In addition to bus advertising, the campaign is running online [www.quotejesus.com] and via social media [#quotejesus] providing more examples of the words of hope that Jesus spoke.

For Londoners Quote Jesus has provided a Christian response to the 2016 campaign by the charity Islamic Relief which saw buses in major cities carrying posters in Arabic which meant ‘Allah is perfect’; the campaign was intended to raise funds for Muslim victims of the Syrian civil war.