THE DAY THEY TOOK MY LITTLE GIRL AGED 3

Imagine this: You are an Assyrian Christian targeted by Islamic State (IS) militants in Iraq. You have become a refugee hoping to escape the madness and sit on a bus with your three-year-old daughter, waiting for the vehicle to leave.

Suddenly a man gets on board and, ignoring your pleas, he rips your little girl from your arms. You get off the bus to try and follow them. Another man threatens to machine gun you on the spot if you don’t leave. Your toddler, who needs to breast feed, is crying as she is carried away. You don’t see her again.

That is what really happened to the mother of Christina Khader Ebada, who was abducted by a perverted Islamic militant outside a primary care centre near Baghdede (Qaraqosh) in August. The family were caught as they tried to escape the city after Islamic State fighters took over. Women were separated from men and the militants stole gold, money and personal ID documents. They were then put on a bus.

Christina’s mum, who is physically handicapped, and her dad, who is blind, yearn to have their little girl back with them again. © Assyrian News Agency www.AINA.org

Christina, aged three, was ripped out of her mother’s arms by an ISIS militant. © Assyrian News Agency www.AINA.org 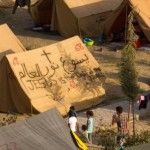 Light in the darkness: this tent in an Irbil churchyard proclaims “Jesus is the light of the world” in Arabic and English. © Assyrian News Agency www.AINA.org

Christina’s mum, who has not disclosed her own name, recalled her horrific experience in a TV interview in a refugee camp. She said her daughter was handed over by the militant to an older man within the building, who seemed to be a leader of the Islamic State fighters.

The man drew his machine gun and said he would kill the woman if she came near her child. So she was forced to leave without her toddler on the bus.

Christina’s mum, who is physically handicapped, has pleaded with world leaders and the international community to do something to bring her child back to her.

She said: “This thing that is taking place here in Iraq, to kidnap this little girl who is innocent, and these crimes they are committing, stealing money, they did not leave us anything, what is this?

“We appeal to human rights groups to help us, to look at us. This is not a humane situation. We can’t live like this all our lives. We have not attacked them. What have we done to them?”

“I want you to return my daughter to me.”

Sadly news reports in the national press have confirmed that girls as young as three are being ‘sold’ in ISIS slave markets and Iraqi families have reported daughters being taken by IS fighters as a condition of the rest of the family being allowed to escape alive.

WARS AND RUMOURS OF WARS…