It’s time to nail our colours to the mast

LONDON, March 22, 2019 – As we sail into stormy seas over Brexit, it’s time for both church and state to nail their colours to the mast – over their stand with Israel in particular, and with biblical truth in general.
We have seriously lost our way thanks to little political co-ordination and much confusion. So we find ourselves going around in circles.
What we really need is a heavenly compass. Have our politicians asked God for directions? Has the Church made its position clear? Most importantly, whose side are we on?
In 1947, the United Nations voted – by the required two-thirds majority – to recognise a reborn Jewish state. But Britain, badly bruised by her shambolic oversight of the region she was charged to prepare for this purpose, abstained in the vote and has been reeling from the blow of betraying God’s chosen people ever since.
Another key moment was the bold step taken more recently by President Trump in recognising Jerusalem as Israel’s capital. But none of the major powers have yet followed his lead, preferring instead to seek appeasement with Israel’s enemies, which is one reason Europe is in crisis.
In the midst of the turbulence in Parliament over the prospect of a future outside of Europe, our only hope of steadying the ship of state is in returning to the Judeo-Christian values espoused by the Bible-believing MPs from Northern Ireland who currently hold the balance of power. And as a further acknowledgement of the God of Israel, and the source of Western civilization, we need to start seriously standing with the Jews.
When, during the Yom Kippur War of 1973, Israel came perilously close to defeat, Prime Minister Golda Meir appealed to President Nixon for help, and his response in sending reinforcements saved the day – and Israel!
Years later Nixon said: “When she was talking (on the phone), I could hear my mother reading stories from the Old Testament to me when I was a boy.”
He recalled one thing in particular. “I could hear her tell me: ‘One day Richard, you will be in a situation where the Jewish people will need your help. When that day comes, do everything in your power to help them.’ It confirmed all my instincts and I knew I had to act. I suddenly realised why I had become President of the United States. It was the moment I had to do what I had to do.”1
With a legacy blighted by the Watergate scandal, which saw him authorise illegal activities in pursuit of being re-elected, I guess few people realise the crucial part he played in Israel’s preservation.
In righting wrongs of past sins committed against Israel, Britain’s Tory government has made a start with an apology of sorts for restricting immigration to the Holy Land for Jews fleeing Nazi-occupied Europe.
Yet in some respects things have worsened with the opposition gaining in the polls in spite of being plagued by anti-Semitism while both the South African and Irish governments have made their anti-Zionist feelings known.
In light of this, and especially of the threat posed by Iran, Christians United for Israel UK is calling on churches to stand with Israel as corporate institutions rather than leaving it to individuals and para-church organisations.
The church as a whole, meanwhile, badly needs to recover confidence in the power of the gospel. This was forcefully brought home to me as I watched Scotland make what one pundit called a ‘miraculous’ comeback against England in last Saturday’s Six Nations rugby test match at Twickenham.
Down 31-0 in as many minutes, they were facing a humiliating slaughter, but came right back with a brilliant second-half display to lead 38-31 before the hosts tied the match by scoring under the posts deep into injury time.
It reminded me of David and Goliath, especially after picking up a 4oz weight from a display of vintage balance scales in a café that same morning. On being surprised at how heavy it felt, I understood how the Philistine giant failed to survive the shepherd’s lethal sling shot.
The comparison was complete when I realised that Scotland had scored five tries – all converted – plus a penalty, whereas the young David had picked up five smooth stones for his fight. But he only needed one! 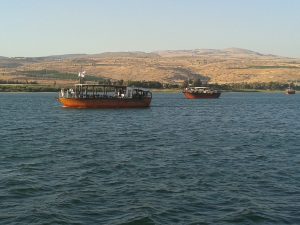 The Sea of Galilee, where Jesus walked on water and calmed the storm with a word. Photo: Charles Gardner

The weapon we have been given is the sword of the Spirit, which is the word of God (Ephesians 6.17) while our ammunition is the gospel, which is “the power of God that brings salvation to all who believe: first to the Jew, then to the Gentile.” (Romans 1.16)

Jesus made it clear that if we fail to publicly acknowledge him, he will disown us (Matthew 10.32f), and in speaking of the signs of his imminent return, he said it would be a time when his disciples will be hated, and when many will turn away amid much deception and wickedness. But he who stands firm to the end will be saved. And the gospel will be preached to the whole world in preparation for his return. (Matthew 24.9-14)

So in the midst of the great trials ahead, gospel opportunities will come – perhaps as never before – as spiritually hungry people seek solace and comfort. Amidst the hardship, there will be a harvest.

As the tempest rages, remember that Jesus is the one who calmed the storm on Galilee!

1The Miracle that is Israel, Phil Davies, Cornerstone Publishing

Our debt to Israel