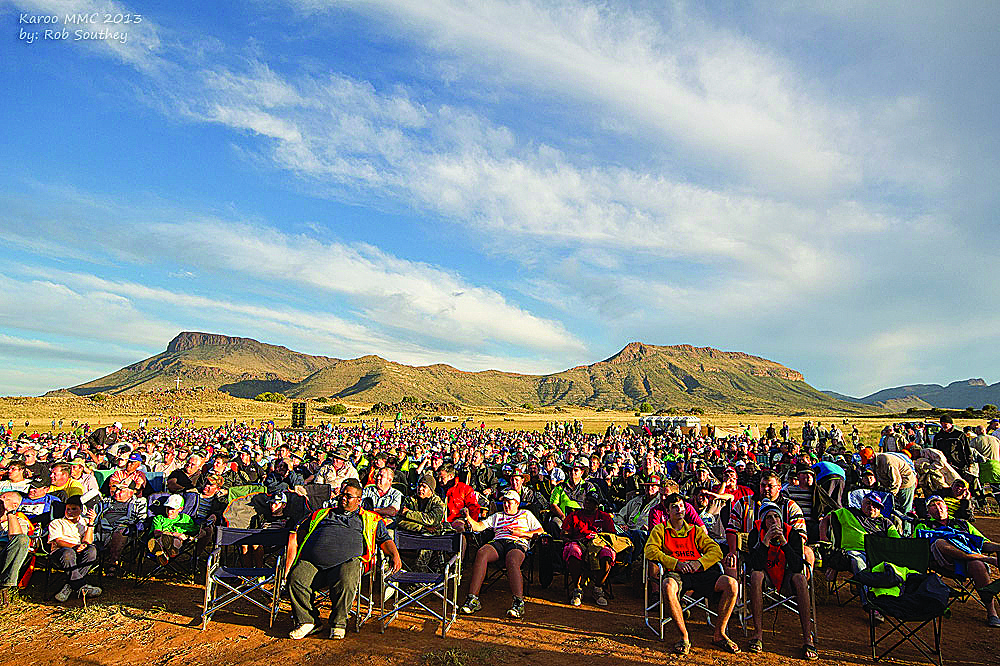 Although hundreds of thousands – perhaps millions – have been affected by it, few in the Northern Hemisphere seem to have heard of the South African revival.

I’m not referring to the 1860 awakening led by my ancestor (by adoption) Andrew Murray1, but to a current movement that is drawing huge crowds – especially men – to Christ. And it is my belief that there is a distinct correlation between this move of the Spirit and a general understanding and support of Israel, to whom Christians are indelibly attached – if we cut ourselves off from our Judaic roots, the Church cannot truly exist. (Romans 11.17f)

Churches in all parts of South Africa – incorporating black and white as well as English and Afrikaans-speaking – are bursting with new life as they prove a counter-cultural provocation to secularists, humanists and others (who are trying it on there too) and especially to a government rife with corruption and virulently opposed to Israel, even to the extent of virtually cutting off diplomatic ties with the Jewish state. This is in spite of the fact that it was Jews who led the resistance to apartheid in the days of the old whites-only Parliament.

One man perhaps stands out among the many leaders of this movement for the influence he has had – and that is Angus Buchan, a humble farmer who doubled as an evangelist soon after a dramatic encounter with Christ in 1979.

His campaigns reaped rewards, but then God called him to focus his attention on men – and he has been faithful to this task ever since, drawing both young and old men to weekend camps initially held at Shalom, his KwaZulu-Natal farm, for seven consecutive years.

It began with just family and a few friends but, six years later, was accommodating a staggering 400,000 men who had gathered from all corners of the land to hear the uncompromising word of God challenging them to take responsibility as head of their families by serving Christ with all their hearts.

The so-called Mighty Men’s Conferences have since spread elsewhere, including the UK, as faith in God has swept across the countryside like a prairie fire. Friends of mine from the Karoo area of the Cape, who in the early days travelled 500 miles to join the camps in far-off KwaZulu-Natal, are now involved in helping to host events in their own farming district.

Angus has proved a huge inspiration as he urges men to run their homes, love their wives and discipline their children in the fear of God, leading to inevitable clashes with political correctness. But as the corridors of political power darken, the light of Christ shines brighter.

Author of the best-selling Faith Like Potatoes which has been made into a powerful movie, Angus has also led meetings in Israel, where Pentecostal-type manifestations such as a mighty, rushing wind (see Acts 2.2) have been evident.

Moreover, the default position of many of South Africa’s churches today is an understanding of God’s everlasting love for Israel and of the church’s enormous debt to them – for the Bible, for their Saviour and much more. This is certainly reflected in the publishing realm, led by Joy magazine (also published in Afrikaans as Juig), the biggest circulation Christian periodical outside the United States. The same can be said for the popular South African news portal, Gateway News.

A recent event involving CMJ (the Church’s Ministry among the Jewish people), for whom I volunteer, bore this out in no uncertain terms. One of our workers travelled a thousand miles from Cape Town to KwaZulu-Natal to speak at a Christian gathering about the significance of Yom Kippur – the Day of Atonement – and how Jesus is the fulfillment of this Jewish holiday, their holiest day of the year.

About 70 people turned up to hear her at a farm in the shadow of the Drakensberg mountains, where I grew up. It so happened that a secular Israeli family touring South Africa rang to inquire about overnight guest accommodation. The owners, Hendrik and Ina Goosen, warned them that a Christian meeting would be taking place. But they said they didn’t mind, and the family – mum, dad and three children – turned up for the entire talk which was followed by refreshments. They were overwhelmed by the experience, and by the love people had for Israel.

I have re-visited my home country a number of times in recent years to see family and friends, and I became aware that it was no longer divided along apartheid lines, but between those who live in fear – the secularists who erect huge steel barriers to protect their property from burglars – and those who live by faith and in freedom, who love their neighbours and believe in the country’s future under God.

Following the latest London terror attack, a South African journalist friend of mine told me of how his daughter was commuting from Wimbledon to central London when the 7/7 terrorist attack occurred (in 2005). “She ended up taking a long walk to work along Tottenham Court Road and only found out what was happening by viewing TVs in shop windows. She was 23 at the time and very much a junior at her work, but we were proud of her witness when her colleagues asked her to pray for them all on that day.”

South Africa has a wonderful spiritual legacy. I have already mentioned the legendary devotional writer and revivalist Rev Andrew Murray who, after learning Dutch in Holland, came out from Scotland to pastor Afrikaners who had fled the British-ruled Cape in search of more favourable pastures. The country was also greatly influenced by the Pentecostal pioneers of the early 20th century – particularly John G Lake and David du Plessis – and it was around this time that the young Nelson Mandela was strongly influenced by Methodist missionaries, who also paid for his education.

My thesis of the link between Holy Spirit revival and love for the Jews is backed up by another famous Scot, Robert Murray McCheyne, along with his fellow countryman Andrew Bonar, who together encouraged the evangelization of the Jews back in the 1830s. Both led missions to Palestine (as it was then known) and Jewish communities in Europe. And when revival broke out in his local parish of Kilsyth, McCheyne took this as a sign of God’s promise to Abraham and his heirs that “I will bless those who bless you” (Genesis 12.3). God’s favour was on them because they honoured the Jews, the apple of God’s eye.2

On the other side of the same coin is the horrendous legacy of the so-called Berlin Declaration of 1909 in which 56 evangelical leaders concluded that the Pentecostal outpourings at Azusa Street in Los Angeles in 1906 and in Sunderland, England, in 1907, were of the devil. Werner Oder, a UK-based pastor and son of a Nazi, believes this amounted to blasphemy of the Holy Spirit and sowed the seeds of the Holocaust.3

It is interesting that, despite early success in Europe, the Pentecostal movement made comparatively little impact on this part of the world whereas it has been a very different story in Asia, Africa and South America.

I appreciate that Jesus warned of deception in the last days, but I feel that sometimes we are in danger of straining at a gnat but swallowing a camel on this point. My favourite author/preacher R T Kendall, writing of how Israel as a whole failed to recognize their Messiah when he came, says: “We are all so sure that we would recognize the authentic when it arrives. You could not have told a Sadducee or a Pharisee that the Messiah would come to Israel without them knowing and acknowledging him. But he came and they rejected him.”4

Some years ago I received a dramatic vision of revival in Doncaster, my home town, during a celebration service involving a number of churches, and immediately shared it with those present. It was of a beautiful new square complete with fountains, trees and smart buildings, and I told them that, although I believed God was saying this would indeed become a reality, it was also a picture of revival to come.

Two weeks later the local paper published an artist’s impression precisely reflecting that vision – and this lovely square, complete with 16 fountains, now adorns the Waterdale area of the town centre and is flanked by the new municipal offices and a modern theatre called Cast, where the town’s pastors recently met for the first time for mutual encouragement. A similar feature, also with fountains, has now been announced for the area adjacent to Doncaster’s railway station.

I keep telling friends and pastors here that, if they wish to see this vision (of revival) fulfilled, they must start blessing Israel – by praying for them, helping their poor, defending them from unwarranted attack and anti-Semitism and, most of all, by reaching out to them with the very gospel which has so blessed us (Romans 1.16 & 10.14).

In South Africa, meanwhile, an estimated one million people camped on farmland near the central city of Bloemfontein (which, incidentally, translates “flower fountain”) on April 22 to pray for their nation following a call from the man they have all come to know as Oom (Uncle) Angus!5

Don’t forget that Jesus is returning – not to London, New York, Paris or Cape Town, but to Jerusalem, as the Lion of the Tribe of Judah! (Revelation 5.5)

If you really love Jesus, you will love the Jews!

1My orphaned great-grandfather, also Charles, was brought up in the Murray parsonage in Graaff-Reinet, 500 miles from Cape Town. Our family is forever indebted to Rev Andrew Murray Snr and his wife Maria, who had 16 children of their own!

5I have written more on this in a further article – Farming for God – which will be posted shortly.