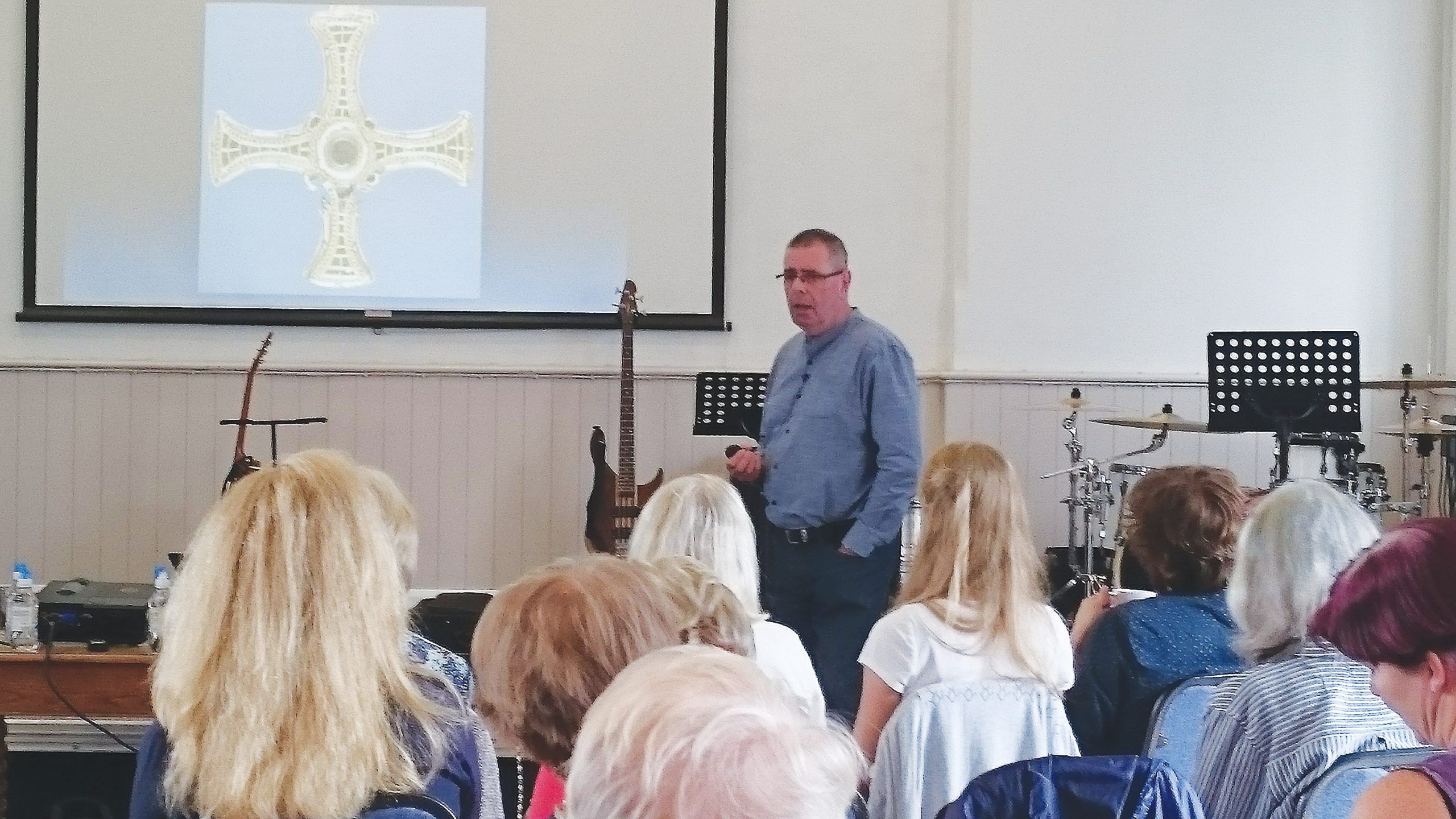 How did pagan practices and symbols become mainstream in Christendom?

Paganism in the Church seminar, Burgess Hill, 9 July. Organised by the Emmaus Group.

Pagan influences entered Church tradition during Constantine’s reign, and have evolved over the centuries to ‘pollute and defile’ the sanctuaries of God across our nation.

This summarises the evidence brought by Pastor Mike Fryer, evidence which challenged, astonished and shocked the audience.  The publicity for the day had explained, “Mike leads Father’s House, a ‘Sabbath Congregation’ in North Wales. His extensive understanding of this subject (pagan influences), combined with his vast knowledge of the place of Israel within biblical prophecy, make him a leading expert on this matter. He appears regularly on Revelation TV’s Middle East Report.”

The introduction of pagan images, icons and practices followed by the traditional Church was caused in part by the Council of Nicea’s deliberate rejection of the church’s Hebraic roots. It replaced God’s feasts and appointed times with a new calendar, with new names, to appease the pagans.

As most know, Christmas is not the time of Jesus’s birth and in fact 25 December is the birth date of Cernunnos, a pagan god.  Jesus was actually born in late September, during the Feast of Tabernacles.  Easter, with its symbols of rabbits and eggs, derives from pagan worship of a fertility goddess, a practice dating back to Babylonian worship.

The familiar ‘bishop’s mitre’ is a hat shaped like the mouth of a fish, and was worn by priests serving the pagan god Dagon.  The seminar considered how so many Christians, especially the young, are getting tattooed, in direct opposition to God’s word in Leviticus 19:28.  It was explained how tattoos were always associated with pagan practice, witchcraft and slavery.

Such matters are not new.  Jesus himself complained bitterly to the Pharisees that they encouraged people to “follow the traditions of men rather than the ordinances of God.” (Mark 7:8)

Burying the dead in churches and cathedrals is also in opposition to the Bible.

Westminster Abbey has over 3000 bodies buried in it, mostly of kings and people of note. Yet God’s word expressly states that dead bodies are unclean and no unclean thing should enter the tabernacle of God. Such practice is also offensive to Jewish tradition, making witnessing to Jewish people all the more difficult, as they know only too well that such practices we adhere to in the ‘Church’ are abominations to God.  Pastor Mike pointed out that if Jesus was to turn up at Westminster Abbey on Christmas Day he would certainly not enter it.

Worship of God on Sunday instead of the Sabbath is in opposition to the commandment to obey the Sabbath and keep it holy.  Early transcripts from the Council of Nicea were shown in which they clearly rejected Sabbath worship, replacing it with sun worship, hence the name Sun-day.  Yet God says, “Keep my Sabbath holy.”

Multitudes of images were shown of many abominable things such as carvings of Green Men, pagan goddesses and Masonic imagery from a variety of churches around the UK.

A common theme in all pagan practice was that it was inherently anti-God, and thus anti-Semitic.  This rebellious spiritual dimension to paganism runs through the veins of modern anti-Semitism, still seen in churches where pagan influence is active.

Indeed, the very reason the Sabbath was changed for ‘Sunday’ was anti-Semitic in motive.  The early Jewish believers were seen as assassins of Christ, evil and they and their practices to be totally rejected.  This rejection paved the way for the introduction of alternative practices, for which paganism filled the void well.

The day concluded by acknowledging that Jesus is returning soon, for a holy, pure and undefiled bride, and that now is the time for the Church to clean up her act and “come out and be separate.”   And that the very stern warning in Matthew 7:21-23 must be heeded:

“Not everyone who says to me, ‘Lord Lord!’ will enter the kingdom of heaven, but the ones who do the will of my Father, the One in heaven.  Many will say to me in the day, ‘Lord, Lord, did we not prophesy in your name?  And we cast out demons in your name, and we did many miracles in your name?’ And then I will declare to them that, ‘I never knew you: you workers of iniquity’.”

It doesn’t matter how much time we give to ministry or how many spiritual gifts we operate in.  Nor does it matter one iota how many miracles, healings, prophetic words or great sermons we utter; if we operate outside the Torah (the term for the first five books of the Bible which set out God’s instructions for holy living) by defiling God’s sanctuaries and failing to keep the Sabbath, then we have a big problem lying ahead.  We have been warned!

Should we be concerned about these practices and symbols? Write to letters@heartpublications.co.uk

Been to any life-changing meetings lately? Send a report of up to 300 words plus separate, clearly captioned jpg photos to editorial@heartpublications.co.uk