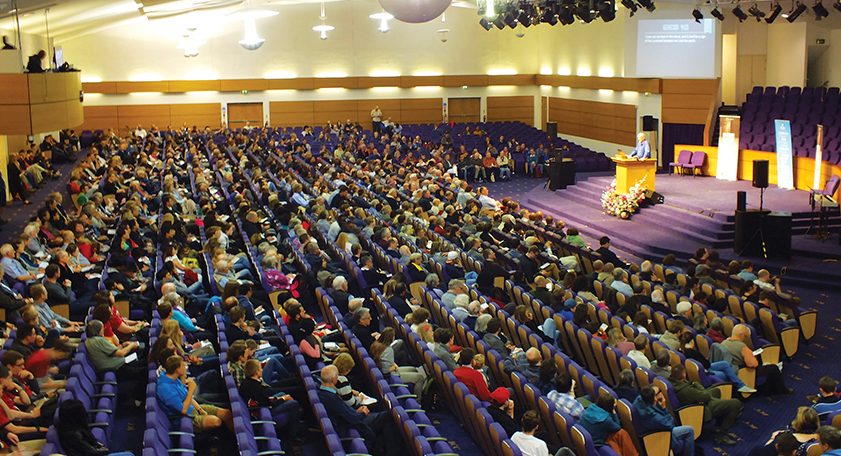 Believing in God not goo as the answer to origins is definitely unpopular these days, especially if you’re a young person. That’s why I was so excited to attend the UK Creation Mega Conference, which featured an impressive line-up of top scientists and apologists from across the world all passionate about interpreting Genesis literally.

With the theme of ‘Inspiring a Genesis Reformation’, the conference featured well-known speakers such as Ken Ham, CEO of Answers in Genesis (AiG), John Mackay, International Director of the Creation Research ministry and Stuart Burgess, professor of engineering design at the University of Bristol.

The auditorium was flooded with Christians from all over the UK as well as 15 other countries, including Mexico and India. Many families and young people attended, totalling about 1,700 delegates – the “biggest Creation conference of the year” according to AiG.

Ken Ham, also CEO of the life-size Ark Encounter exhibit in Kentucky, showed how trying to squeeze evolution into the Creation account affects Christians’ Gospel witness because it undermines the
authority of God’s Word.

He presented shocking statistics on the number of young people who begin doubting the Bible at a young age, and explained how having answers to common questions – like “Who was Cain’s wife?” (his sister – genetic mistakes weren’t a problem back then) and “How did Noah fit all the animals on the Ark?” (he took each ‘kind’ of animal, not each species) – ultimately paves the way for sharing the Gospel.

There were also stimulating lectures from Creation scientists in fields ranging from astronomy to engineering. For example, geologist Paul Garner spoke about how the missing sediment, the absence of time gaps and the lack of animal burrowing activity in the rock record points to a global Flood, not gradual deposition over millions of years; biologist Dr Nathaniel Jeanson demonstrated how Darwin’s conclusions now need reinvestigating since he only knew 15% of the species we have today!

I came away from the conference fired up with biblical and scientific reasons for, as Ken Ham put it, simply “taking God at his Word from the very beginning”.