What if we are already in a period like Noah’s, leading up to the final floodgates of fire being opened? 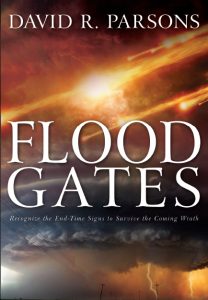 ‘Floodgates: Recognise the End-Time Signs to Survive the Coming Wrath’

In this highly significant and well-researched book on the end times, David Parsons aims to identify God’s specific ‘end game’ strategy for bringing this present age to a close.

Parsons is an attorney, journalist, ordained minister and Middle East specialist working for the ICEJ (International Christian Embassy Jerusalem). He claims that the moment we enter the Tribulation will be self-evident, but what about the period leading up to it?

Taking the “days of Noah” as a parallel (as Jesus does in Matthew 24) he asserts that just as God opened the springs of the deep and the floodgates of the heavens (Genesis 7:11), so fire is stored up above our atmosphere and below the earth’s crust, waiting to be released to destroy the current world before the new heaven and new earth are created.

Parsons explains that the long period of building the ark represented the time between God’s decision that judgment would come and the actual execution of that decision. He asks: what if we are already in a similar period leading up to the final floodgates of fire being opened?

Part One of the book includes chapters about the divine nature and proof for the biblical flood. There is a helpful discussion on the ‘forbidden union’ between angels and women which created the Nephilim (Genesis 6:4), a Bible passage often seen as complicated and controversial.

The vital conclusion is that hybrid humans could not be allowed to multiply further. Mankind had gone against the natural order of God’s Creation, and humanity from that point was doomed.

Part Two, ‘The Modern Rebellion’, explores the ‘parallel plunge’ today, with chapters on the blight of violence and the sexual revolution. Parsons identifies the tipping point as the acceptance of evolution as a mainstream idea, leading to the belief that God is no longer a credible Creator and hence we can transgress his boundaries with abandon.

These days we have the capacity to interfere with our species to an extent that blurs the distinctions that God has ordained. With genetic engineering, cross-breeding, sex changes and attempts to augment and enhance human bodies using technology, we can create human hybrids without input from fallen angels.

In Parsons’ view, this ‘social Darwinism’ began around 1900, with one obvious outworking being the horrors of Nazism. Interestingly, he highlights two other features from the turn of the 20th century: the emergence of evangelical Pentecostalism and the rise of Zionism leading to the recreation of the State of Israel.

Together, these three strands are all vital in God’s end-time plans. True Spirit-filled believers and the restoration of the Jewish people together form an ark-like contrast to the majority of humanity.

The book has been 20 years in the writing, during which Parsons has been living and working in Jerusalem. As such, it has slowly crystallised into a comprehensive prophetic thesis about our times with a distinctive slant that is well worth thinking through.

If Parsons is right, the verdict has already been declared. Denying God as Creator has primed the final judgment.

This review was abridged with permission from Paul Luckraft’s full review which first appeared in Prophecy Today online: www.prophecytoday.uk