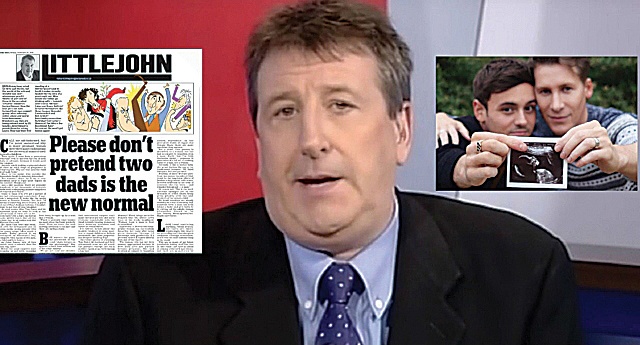 Journalist under fire for asking awkward questions about baby

As the great shaking of British society continues to turn our values upside down, the Daily Mail has managed to seriously ruffle feathers with some elephant-in-the-room questions few have the guts to ask.

Richard Littlejohn, in a column published in February, has done us all a favour by tackling the ludicrous news that Olympic diver Tom Daley and his ‘husband’ are having a baby, focusing particularly on the fact that no mention is made of a mother (presumably the possessor of the womb featured in the much-publicised ultrasound scan) or who the actual father is.

His great offence was no doubt in challenging fellow scribes to stop pretending this kind of relationship is the ‘new normal’. At any rate, he has succeeded in raising hackles to such an extent that major companies, including Honda, Morrison’s supermarket and the chemist chain Boots, withdrew their advertising.

Littlejohn also stated his belief “that children benefit most from being brought up by a man and a woman”.

I only hope the Mail stands by their writer, though I suspect editors may have their eyes blurred by pound signs, and thus be tempted to rein in one of the finest journalists among the fast-disappearing old school representing a press that was truly free to express its views.

Most, if not all, of our treasured freedoms in this land are the product of our great Judeo-Christian heritage. So why are we (the church) leaving it to secular journalists like Littlejohn and Melanie Phillips to do our ‘dirty’ work – i.e. taking the flak for challenging the accepted new norms of society.

Christians have historically been known for straight talking in addressing controversial social and other issues which was hardly surprising because they were following One who dared to accuse religious leaders of hypocrisy – in fact he compared them to “whitewashed tombs”, looking pristine on the surface but full of dead men’s bones. (Matthew 23.27)

The gospel truth has always provoked uproar – often because it affects people’s pockets – as several instances in the Acts of the Apostles (the Bible’s account of the early church) testify. Many businesses of the time were built on the backs of idolatry (i.e. worship of rival gods). And in more recent times, William Wilberforce had to overcome decades of fierce opposition to his anti-slavery campaign because so much big money had depended on it.

Where is the Christian voice today? Where is the courage once displayed by Christian martyrs who willingly died for their faith? After all, these issues strike at the very heart of what the gospel stands for – marriage, family, relationships (with God and one another). But, for the most part, we remain silent and walk by on the other side of the road letting the ‘Good Samaritan’ tend to the wounds of society. Jesus, in his famous parable, deliberately chose a Samaritan (of mixed race and despised by Jews of the time) as the one who rescued the man beaten up by robbers.

With too few exceptions, many of us in the church have become men-pleasers, not God-pleasers. If Jesus had been more concerned with appealing to men than in carrying out his Father’s will, he would not have died on the cross and we would have been left with neither hope nor salvation. Christian leaders who refuse to address these issues are clearly not crucified with Christ, dead to the world and refusing to conform to its standards. (See Galatians 2.20 & Romans 12.2)

The furore sparked by Littlejohn’s piece was entirely predictable; and yet the very same (Daily Mail) issue carried a major feature exposing Labour leader Jeremy Corbyn’s murky political past in meeting up with a Communist spy from behind the Iron Curtain. Was the metropolitan liberal elite much concerned about that? Evidently not.

Just as the frenzied backlash stirred by the Tom Daley article was kicking off (I was initially unaware of it as I was involved in a south London conference), a Nigerian-born pastor was heaping praise on Britain’s great heritage, mentioning in particular the Christian motivation of past businessmen like those who founded Cadbury’s, Guinness and, yes, Boots the chemist – the very firm that has now protested against critics of a non-Christian lifestyle!

Even some of our great football clubs, founded as part of the church’s outreach to young people, are now in the hands of Middle Eastern nationals from countries which ban both Bibles and Christians, he lamented.

I notice that legendary Wimbledon champion Margaret Court is also in the dock for her stand on sexual ethics. Lesbian former champions Billie Jean King and Martina Navratilova are campaigning to have a Melbourne arena re-named in protest. How pathetic!

It seems that with 50 years having now passed since both abortion and homosexuality were declared legal in the UK, they have now been officially ‘normalised’ and no dissent will be tolerated. Is this the fruit of a free society? Does no-one still cherish free speech?

Well, all is not lost, if Sunday’s touching episode of Call the Midwife is anything to go by. One of the storylines followed a Nigerian sailor thrown off his ship because the crew believed he had smallpox, which was highly contagious.

Lonely and distraught, he prayed desperately as he hid in a drain, calling on Jesus for help, which duly came in the shape of the kind nuns who supply the dock area with midwives. It turned out that he actually had leprosy, which was treatable. And as he exulted in the answer to his prayers, one of the nuns handed him a Bible, saying: “In the cross is our anchor.”

Although the letter of the law would have allowed Jesus to stone the woman caught in adultery, as her accusers pointed out, he refused to condemn her, but added: “Go now and leave your life of sin.” (John 8.11)

Christians who truly follow their Lord do not hate those who commit adultery (which includes all sex outside marriage), but neither can they affirm the practice. They would be betraying their faith if they did. Get used to it. Enough is enough.