Why are we here?

That’s a question that people have been asking for centuries. Secular science has no real answer to this. In fact, many scientists admit that, according to scientific laws, we really ought not to be here! 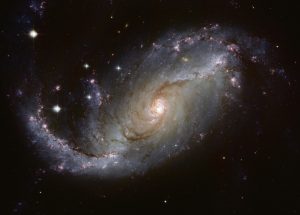 The ‘first law of thermodynamics’ tells us that matter (mass/energy) can be changed, but can neither be created nor destroyed. This means that physical processes couldn’t have created the universe from nothing.

The ‘second law of thermodynamics’ states that an isolated system always becomes more disorderly overtime . Both these basic laws of science undermine the “big bang” theory — the idea that our universe originated in a massive explosion some 15 billion years ago, which eventually resulted in everything that now exists, including galaxies, stars and our beautiful planet with its myriad forms of life.

According to scientist Aman- da Gefter: “Some basic physics suggests that you and the rest of the universe are overwhelmingly unlikely to exist. The second law of thermodynamics, that most existentially resonant of physical laws, says that disorder, or entropy, always tends to increase.”1

She raises a further problem for the ‘big bang’ theory: “According to the theory, matter and antimatter were created in equal amounts at the big bang.

By rights, they should have annihilated each other totally in the first second or so of the universe’s existence.

“The cosmos should be full of light and little else. And yet here we are. So too are planets, stars and galaxies; all, as far as we can see, made exclusively out of matter. Reality 1: Theory 0.”2.

In 2004, a group of 33 scientists published an open letter challenging the ‘big bang’ theory. The statement began: “The big bang today relies on a growing number of hypothetical entities, things that we have never observed — inflation, dark matter and dark energy are the most prominent examples.

“Without them, there would be a fatal contradiction between the observations made by astronomers and the predictions of the big bang theory. In no other field of physics would this continual recourse to new hypothetical objects be accepted as a way of bridging the gap between theory and observation.

Only God can create something from nothing, as the Bible says

“It would, at the least, raise serious questions about the validity of the underlying theory. But the big bang theory can’t survive without these fudge factors.”3

Why do so many scientists invoke incredible and outlandish theories, rather than consider the possibility that our universe, and everything in it, are the work of God? Is it because believing in God has implications?

Only God can create some- thing from nothing, as the Bible says: “By faith we understand that the universe was formed at God’s command, so that what is seen was not made out of what was visible” (Hebrews 11: 3).

We believe the universe owes its origin to a big God, not a big bang! A God who sent His Son to save us from our sin and enable us to know him as a Father and friend.