But its believers have found true freedom

Bearing in mind the brutality meted out against protestors as Hong Kong slips inexorably towards China’s orbit of control, we are reminded by author Kai Strittmatter of the tendency for totalitarian regimes to rewrite history.

“In China, remembering events the Chinese Communist Party chooses to erase from history is a subversive act and thus forbidden and punished,” he wrote in the Daily Mail.1

For example, reference to the Tiananmen Square massacre of 30 years ago has been gradually eradicated and many under-30s have no idea that it ever took place. “The state’s troops murdered the protesters; the state’s writers murder the truth.”

Sound familiar? Yes, such erasure of the past is proceeding apace all over the globe – even in our country, but especially in the Middle East, where Islamist terror groups are hell-bent on turning truth upside down in order to justify their murderous behaviour.

They even go to the extent of denying that the Holocaust ever took place, and refuting ancient Jewish links to the Holy Land despite the weight of evidence backed by libraries of documents and multiple acres of archaeological digs.

True, the land was indeed held by the Muslim Turks for 400 years until Britain’s General Allenby effectively won it back for God’s ancient people.

But even Jordanian academic Rami Dabbas, in saying that Arabs have everything to gain from ‘normalization’ with Israel, acknowledges: “The Arabs are the original occupiers, and have no right to deny the return of the Jewish nation.”2

“It is time to solve this conflict, and that begins with us, the Arabs, accepting the Jewish people’s true historical connection to this land. We have everything to gain from so doing.”

Kai Strittmatter, meanwhile, in his essay, goes on to mention China’s “socially harmonised and politically compliant subjects” whose every move is being increasingly watched by ‘Big Brother’ – now on an apocalyptic scale with a staggering 600 million CCTV cameras.

That’s almost one for every two people in a vast country now exporting its surveillance and artificial intelligence technology all over the world in an apparent attempt to expand its global influence.

But before we congratulate ourselves for not succumbing to this extreme form of socialism, consider how a largely compliant British society has been so quickly and easily mesmerized into a politically-correct harmonisation of ideas, ethics and morality – the ‘normality’ of same-sex ‘marriage’ and even the encouragement of transgenderism in primary schools that effectively amounts to state child abuse.

And who among us dares to question this diabolical form of social engineering, otherwise known as ‘Cultural Marxism’? We have been trained like dogs to ‘sit’ and ‘walk’ at the command of our progressive masters. Even pulling at the leash is forbidden, and we are condemned as unloving bigots if we should so much as suggest that there is another, better way.

With the World Cup Cricket tournament currently being hosted here, Hatikvah Films have been promoting their docudrama DVD Out of the Ashes – the hugely inspiring story of how one of England’s greatest cricketers heard the call of God to China. 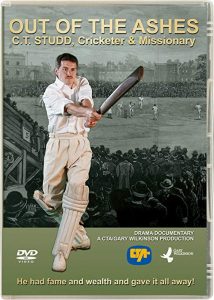 Twice achieving the ‘double’ of 1,000 runs and 100 wickets in a county cricket season (in just 20 and 25 matches respectively), C T Studd was a leading member of the England team that first brought the Ashes3 back from Australia in 1883.

But his missionary endeavours reached much wider fields. As part of the so-called Cambridge Seven, Studd endured years of extreme hardship and deprivation to bring the gospel to the Chinese people. After giving away his vast fortune to Christian causes, he also went on to serve God in India and Africa, where he founded the World Evangelisation Crusade in 1913.

But it was the China Inland Mission, founded by Barnsley-born Hudson Taylor, that first stirred his heart. And it is believed that, due largely to their efforts, there are more Christians in China today than there are people in Britain. In fact, estimates reach as high as 100 million, but it is difficult to quantify partly due to the severe persecution that has forced many believers to practice ‘under the radar’ while others have paid with their lives.

These brave souls may have been ‘chained’ by Communism, or even slain by the Dragon symbolic of China, but they have been truly set free by Jesus, who said: “If you hold to my teaching, you are really my disciples. Then you will know the truth, and the truth will set you free.” (John 8.31f)

That’s the potential power of the gospel, and we praise God for men like Taylor and Studd who gave their lives so sacrificially for the Chinese people.

So when you think or hear of China again, picture the teeming millions of believers being persecuted for their faith. Pray that they will stand, as this cricketing hero of old stood the test in a fiery trial.

Studd left the comfort zone of fame, fortune and familiarity for foreign fields, for he was convinced that “if Jesus Christ be God and died for me, then no sacrifice can be too great for me to make for Him.”

Reflecting further on this, he said: “Some want to live within the sound of church or chapel bell; I want to run a rescue shop within a yard of hell.”

And in a poem he penned, he posed the ultimate challenge: “Only one life, ’twil soon be past; only what’s done for Christ will last.”

3Literally, an urn with the burnt-out remains of a bail, used to keep the wickets in place. The contest came to be known as the Ashes in response to England’s loss to Australia at the Oval in 1882, when a satirical obituary declared that English cricket had died and “the body will be cremated and the ashes taken to Australia”.