“I knew it was going to happen,” says the mother held on death row for over eight years

In France for the launch of her new biography, persecution survivor Asia Bibi met President Macron and said she forgives those who tried to kill her.

The Pakistani Christian, who spent eight years on death row on blasphemy charges, was invited to France by Emmanuel Macron, and has filed an initial application for asylum there.

However, after meeting Macron, Bibi said she had not yet decided where she will settle when her asylum in Canada runs out at the end of this year.

“I need time to think,” Bibi said. “Canada has been good to me. France has been very good to me.” 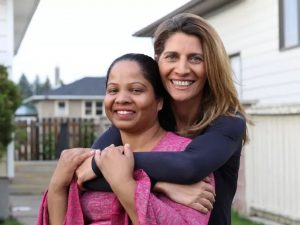 Asia Bibi with the co-author of her new book, Anne-Isabelle Tollet

In fact, Bibi’s new book is co-written with French journalist Anne-Isabelle Tollet, who campaigned for her release. ‘Enfin Libre!’ (‘Finally free’) was published in French in January and the English version is due in September.

Bibi said she now wants to work with Tollet to urge Pakistan to free others imprisoned under the anti-blasphemy laws that nearly led to her death.

Hannah Chowdhry of the British Asian Christian Association reported Bibi was introduced at the launch as a “very devout Christian, who believes that whatever happens to her, happens from God”. The spokesperson also explained how Bibi “prayed every day during her imprisonment – it was her faith in God that gave her the strength to continue through her difficult life.”In the book, Bibi says that a small white bird visited her in prison during her lonely eight and a half years in isolation. She felt the presence of God through this encounter and it gave her strength. The bird became a reminder to pray daily and she never lost the belief that one day, she would be free again.

A small white bird visited her during her lonely isolation

At the book launch, Bibi spoke of her forgiveness of all those who hated her, and added: “God saw my tears and heard my crying and when he felt the timing was right, he set me free… I never doubted God…

“A priest at my baptism told my mother that one day I would suffer greatly, but that God would release me from this at an appointed time. I knew it was going to happen one day, as my parents had forewarned me many times.”

Murdered for using water from a well