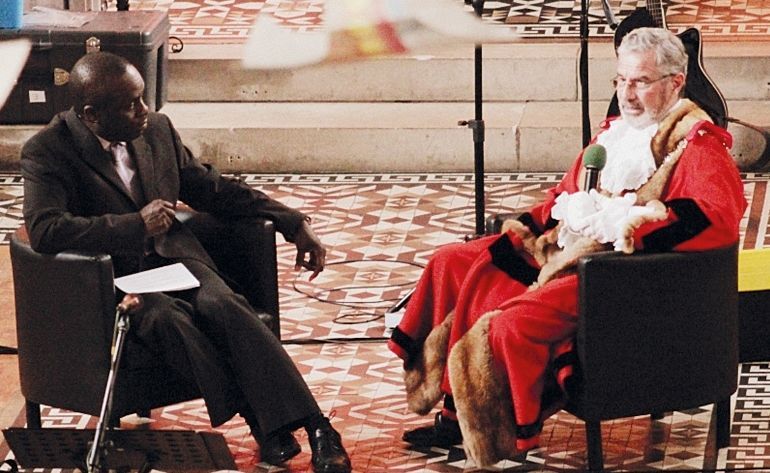 Rev Andrew Fadoju talked to the new Mayor about his role.

CLLR VIC WALKER is not your usual estate agent, having combined his day job with missionary projects for many years.

Originally from Plymouth where he once opened a mission centre to help poor people, he has lived in Worthing for 15 years. He was previously a student in theology studies at Elim Bible College and has been on many missions to countries including Romania and Rwanda.

The new Mayor was a founder member of Faith through Action and a board member for One Challenge, both Christian charities. He married Rosemary Walker, who was a member of St Matthew’s Church in Worthing, in June 2013.

Vic Walker was officially inaugurated at the town hall on Friday, June 13. Fellow councillors and other dignitaries then attended a celebration civic service held at Elim Church in the St Paul’s Centre, Chapel Road, Worthing on Father’s Day (Sunday, June 15).

At the service, Rev Fadoju said: “I am pleased that I know the man behind the robes of Mayor and I know his desires will not be on himself. The Vic Walker that I know is the Vic who wants to serve others.”

Leadership responsibility was the theme of Rev Fadoju’s sermon, comparing King Nebuchadnezzar who was self-serving with the servant heart of King David. He talked about how strength of character was an important aspect of leadership, and King David was a good leader because he allowed God to lead his own life – as revealed in Psalm 103.

He added: “For fathers the greatest responsibility they will ever have is to nurture their children.”

Cllr Walker, who gave a reading from Daniel 4: 1-27 at the service, told HEART: “I think that it is an honour and a privilege to become Mayor. It was an excellent service today. I feel very humbled and I’m really, really pleased that a lot of dignitaries travelled so far. Pastor Andrew, and the choir, and everyone else involved served us very well.”

The Mayor’s charities of the year are Faith through Action, Go Youth Activities, One Challenge UK and the Worthing Churches Homeless Projects.