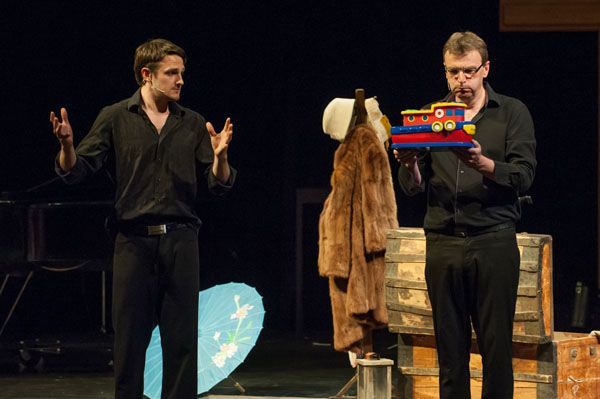 Michael Taylor and David Robinson are a double-act used to far larger venues, with audiences sometimes over 700, but had relocated in haste to Worthing Baptist after a sudden cancellation in another county.

The play itself unfolded from a wicker basket, the source of their ridiculous props and costumes. Working their way through Genesis was no easy feat and they certainly wanted to let us know, with hilariously premeditated rhyme and impressively warbled lists of names. Michael’s and David’s natural flair for acting, expert collaboration and physical and vocal transformations of character, undeniably proves to be some the best Christian theatre around.

The company, Searchlight Theatre, founded by Michael and David, has performed numerous other plays, including the internationally acclaimed “Questioning Aslan”, a peek into the doubts of CS Lewis and his interrogation of Christianity. The duo perform worldwide, travelling to countries such as Romania and the USA.