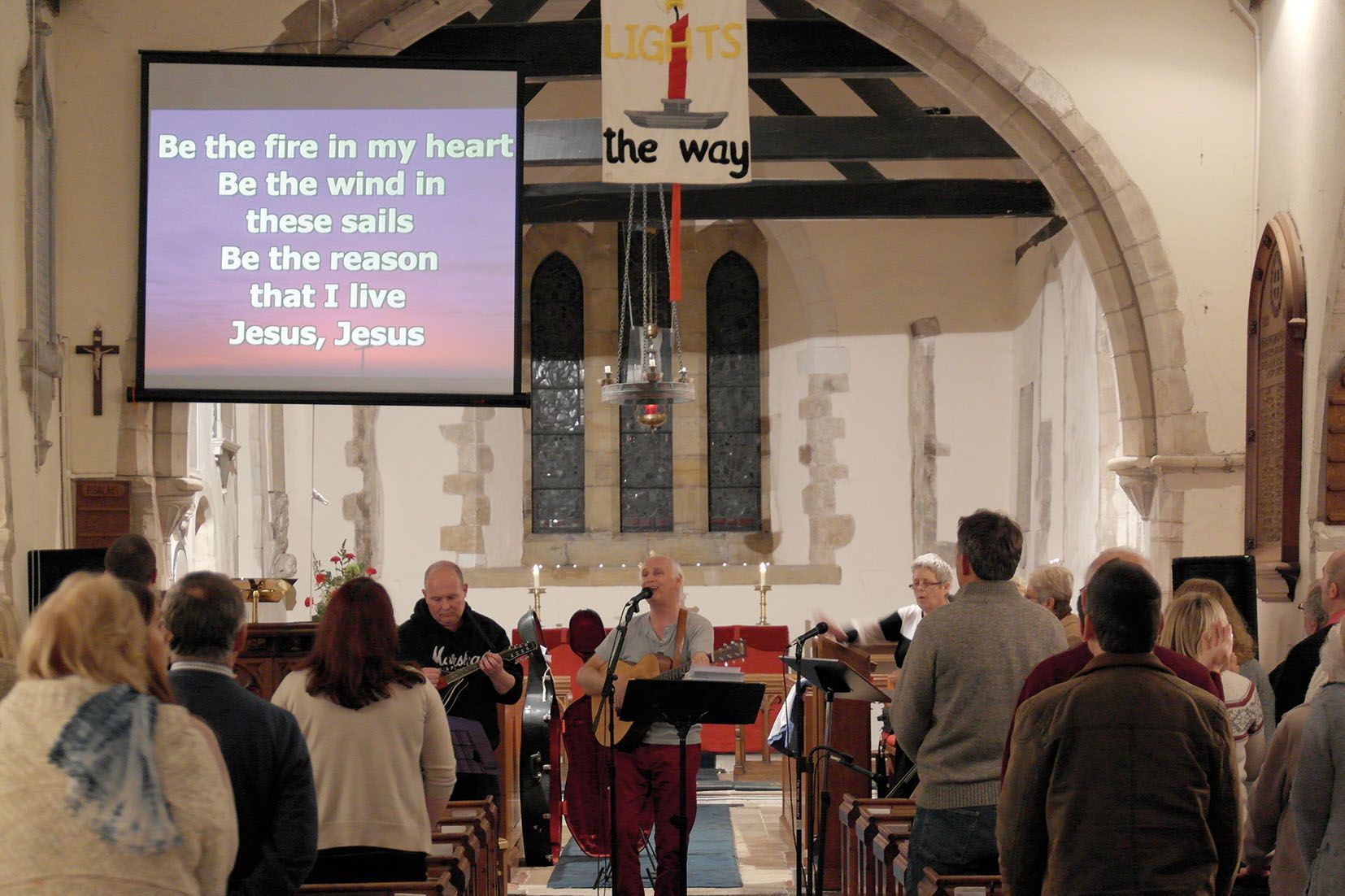 An “alternative” service has attracted scores of worshippers from across Sussex villages, rejecting Sunday night TV in favour of live worship. And the idea is about to spread. Clive Price reports

SUSSEX VILLAGERS are riding a new wave of “alternative worship” that mixes historic hymns, ancient liturgy and contemporary choruses – complete with coffee and cake at half-time!

Called “Epiphany”, the event is currently held twice a month by a group or “benefice” of Anglican churches – St Mary’s, Clymping; St Mary’s, Yapton; and St Andrew’s, Ford. And now there’s a call for this unique experience to be taken to other villages in the county.

“We’re looking at taking ‘Epiphany’ on the road,” said the Rector, Rev Richard Hayes, who leads the event. “We’ve certainly got another village benefice, similar to us, which is looking at inviting us over to model it, as an idea for them to pick up.”

Although emerging from a local Church of England base, “Epiphany” draws between 35-65 worshippers from further afield and across the denominations. The event also involves musicians and speakers from other churches, such as Tom Robson, a curate from St Margaret’s, Angmering.

Features include a relaxed atmosphere, blended traditions and the simple fact that Richard chose the “completely empty slot” of 7.30 on a Sunday night. People can come from other churches without interfering with their own services.

“In a village like ours, people do choose to go into the towns to worship,” Richard explained. “Small churches don’t suit them. It’s not trendy any more to be in a small church…but at the same time I had good relationships with a lot of these folks. I knew them, they knew me. And I thought, what if I could combine some stuff here, and we put on something that would connect people?”

He didn’t want to do “same old, same old”. So the aim was to keep an edge to the teaching by drawing in speakers of different traditions – from “new church” to “high church”. When he first started the event four years ago, Richard led the music. Then he brought in Nigel Brooks, worship leader of Immanuel Church, Chichester.

At the last event of the year, Rob included old hymns “O Come O Come Emmanuel” and “Come thou Fount of every Blessing” alongside new tunes like “Waiting here for you” – all in a folk style.  Richard led “night prayers” from traditional Anglican liturgy. The varying elements flowed together – including coffee and cake – along with a collection for victims of the Philippines typhoon.

“We play around with the format,” said Richard. “We’ve done some liturgy, we’ve done some breaking of bread, we do a block of worship, we do the peace, but we also have refreshments in the middle of the service and then the preach.” They alternate between two venues – St Mary’s, Yapton, and Clymping church hall.

At the most recent “Epiphany” in the 13th century splendour of St Mary’s, worshippers told HEART OF SUSSEX what they liked about the concept. “I love it,” said Yvonne, “the way people come together from different churches. I love the way there is freedom in worship.”

Another regular, Rob, said, “It’s a refreshing mix of traditional and contemporary…it’s almost like a hub of people coming together”.