‘Against the Tide’ conference with Bishop Gavin Ashenden

Future persecution of Christians could be enough to force the UK Church underground, a prominent bishop has warned.

He was arrested by the KGB for smuggling Bibles 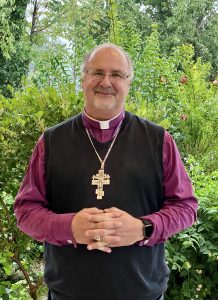 Recounting his own arrests by the KGB (Soviet Union state security police) for smuggling Bibles and books into Russia and Czechoslovakia in the 70s and 80s, Bishop Gavin Ashenden gave a sobering analysis of the forces arrayed against the Church in Europe: “My sense is that we [will] have something like ten years under the secular cosh which will be bad, and then we will have an Islamic constraint, which will be worse.”

“We’ll have ten years under the secular cosh”

In his erudite yet engaging style, Dr Ashenden, who is a former chaplain to the Queen and a bishop of the Christian Episcopal Church, diagnosed the malady besieging today’s Church as ‘Cultural Marxism’. In response to the advert in this paper, guests had travelled from as far as Wolverhampton and Winchester and were certainly not disappointed. 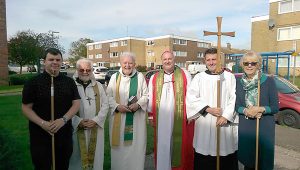 Developed in the 1930s by the left-leaning Frankfurt School intellectuals, Cultural Marxism was the insidious alternative to Marx’s failed economic model which aimed to destroy society’s Judeo-Christian foundations. Under this new ideology, traditional institutions were to be overturned by the elevation of gender-based victim groups. Any dissent deemed ‘politically incorrect’ would become a ‘thought crime’.

Drawing our attention to a vision of Pope Leo XIII in 1886 in which the devil asked Jesus for 100 years to destroy the Church, he surveyed the devastation of “forcible secular utopianism” during the 20th century: the Russian revolution, the rise and fall of Communism, two world wars and the Holocaust. With Islam becoming an increasing cultural influence in the West, Bishop Ashenden explained that the Muslim protests over sex education signal a breakup of the current “compact” between Islam and the Left.

Stating that this country will be 51% Muslim by 2050, he cited an imam friend who remarked that by the time of his grandchildren, Britain will be an “Islamic republic”.

As the threat of criminalisation for expressing orthodox beliefs increases, Bishop Ashenden suggested that Christians may need to start creating underground networks and “prepare for the catacombs.”

The lecture recording is available on Bishop Ashenden’s website

With thanks to Fr Michael Blades