The day of the Lord 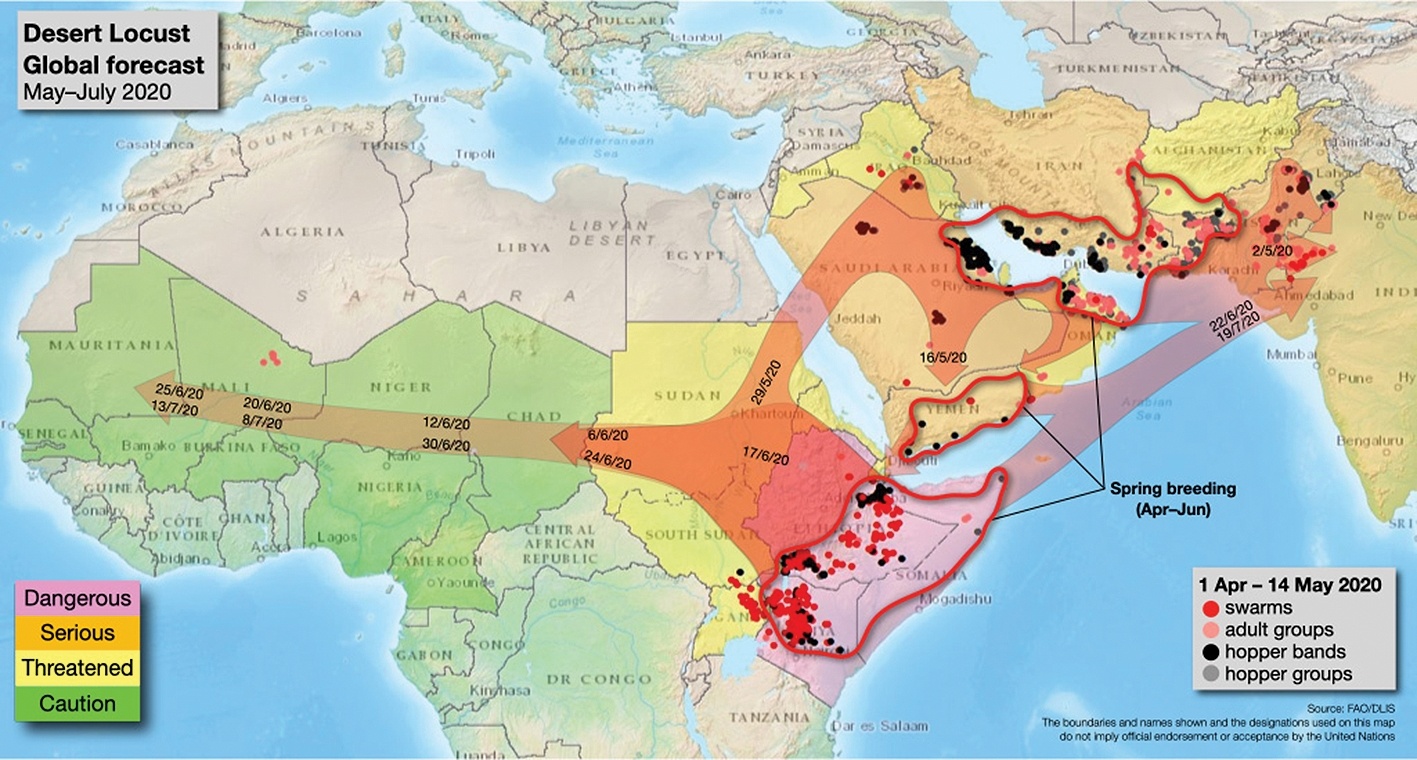 Our daily news is so filled with the coronavirus pandemic that we are failing to notice another plague that is developing at an alarming rate.

It is a plague of locusts of biblical proportions that is already covering a huge swathe of territory across the Middle East and the Horn of Africa, and even spreading eastward as far as Pakistan. It threatens to bring famine and starvation to millions of people if it is not controlled within the next few weeks.

Heavy rains fell across the whole of East Africa and the Middle East (including Israel) in April, which is the time of year when the young locusts generate. The forecast is bleak, as millions of hoppers with their voracious appetite are expected to devastate areas where they have already settled. Soon the locusts will be flying in immense swarms, hundreds of miles wide, and are expected to sweep across vast areas of Africa and the Middle East, extending east into Asia.

The plague of locusts has already done immense damage in Somalia, Ethiopia and Kenya and across into Uganda and South Sudan, devastating desperately needed crops following years of poor harvests and famine.

What is forecast to be the greatest plague of locusts ever seen began in a desert area around the Gulf of Oman in 2018, when exceptional storms swept the area; these generated a voracious breed of desert locusts that swarmed on both sides of the Gulf, with Iran on one side and Oman, Yemen and Saudi Arabia on the other side.

Even a small swarm of a third of a square mile can eat as much food as 35,000 people would in a single day

The work of controlling the spread of the locusts through insecticides and aerial spraying was hampered during April because of lockdowns caused by the coronavirus pandemic. The two plagues are now jointly affecting vast areas of Africa and the Middle East.

Even a small swarm of a third of a square mile can eat as much food as 35,000 people would in a single day. Existing swarms are already laying eggs that will hatch to generate the next invasion, expected in the summer.

It is an extraordinary time for a plague of locusts, with the attendant possibility of worldwide famine, to hit the world – just when the coronavirus pandemic is hitting all nations!

In the Bible God uses plagues and famines to send strong messages to people. He used plagues to send messages to Egypt to let the people of Israel go from slavery, and there are many more examples. Jeremiah says that the sword, famine, and plagues are God’s instruments of sending warnings or judgement and they are usually accompanied by calls for repentance.

So how are we to interpret what is happening today? We have not just one plague but two, simultaneously hitting the nations. Surely God must have some extraordinary purpose in allowing TWO plagues to hit the world at the same time.

Joel uses this to warn of an invasion by enemies of Israel who will devastate the land: “Before them the land is like the garden of Eden, behind them, a desert waste – nothing escapes them” (Joel 2:3).

He uses this threat of invasion to call for repentance: “Rend your heart, and not your garments. Return to the Lord your God, for he is gracious and compassionate, slow to anger and abounding in love, and he relents from sending calamity” (Joel 2:13).

But Joel also foresees a time coming when God will judge all nations – particularly for what they have done to his covenant people of Israel. This will be the benchmark by which the nations are judged, according to Joel.

He says: “In those days and at that time, when I restore the fortunes of Judah and Jerusalem, I will gather all nations and bring them down to the Valley of Jehoshaphat. There I will put them on trial for what they did to my inheritance, my people Israel, because they scattered my people among the nations and divided up my land” (Joel 3:1-2).

If you look at the map where the plague of locusts are centred, it is almost exclusively hitting nations that are hostile to Israel, led by Iran whose leaders have sworn to destroy Israel and are said to be near the point of developing nuclear weapons that could wipe out Israel at a moment’s notice.

I believe God is calling for repentance in all nations where the sins of humanity have reached the tipping point that is incurring inevitable judgement. God hates the shedding of innocent blood through the millions
of babies that are being aborted.

And he hates the greed, violence and injustice that is the spirit driving the world economy whereby millions go to bed hungry every night while others live in luxury. The message I am hearing is that it is only repentance and turning that can stop the plagues from devastating the nations.

But the supreme measure by which God judges the nations is the way they treat Israel, God’s covenant people, because that is a measure of their attitude towards God himself. They hate Israel because they hate God: and in some strange way, Israel and Jerusalem symbolise God in the minds of millions of people.

Just as the Nazis blamed the Jews for all their misfortunes, the people in many other nations do the same. The nations persecute Jews because they are in rebellion against God.

I am not prophesying that we are coming to the great final judgement of the nations. No one knows God’s timetable and it is utterly wrong to speculate upon the times that only the Father has in his control.

Only repentance can stop the plagues devastating the nations

But I do believe that God is sending a very urgent warning to humanity that our sinfulness – the sins of all nations – have reached such a point that judgement is coming, and only repentance and turning can save us from destruction. Will the leaders of the nations take heed of the warning signs?

More articles by Clifford Hill can be seen in the Prophecy Today section of this paper and in the free weekly online magazine: www.prophecytoday.uk

India had asked Iran and Pakistan if they could work together to fight the locust swarms. Iran had been keen, but Pakistan was slower to respond, according to News 18 in May.

The swarms had been forecast to reach South Africa, but one pastor said they had prayed for their country to be spared.