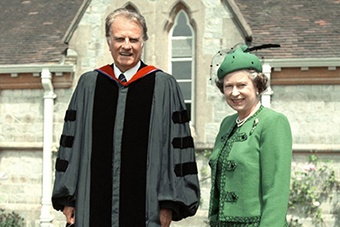 Rev Graham on a visit to Queen Elizabeth in 1989

BILLY GRAHAM was a country boy raised on a dairy farm in Charlotte, turned world evangelist. He prayed with every US president from Harry S Truman to Barack Obama.

Back then, “Billy Frank” preferred baseball to religion. “I detested going to church,” he recalled.

But in 1934 at a revival led by travelling evangelist Mordecai Fowler Ham, 15-year-old Graham surprised himself by committing his life to Jesus Christ.

“I was opposed to evangelism,” he said. “But finally, I was persuaded by a friend [to go to a meeting]… and the Spirit of God began to speak to me… One night, when the invitation was given to accept Jesus, I just said, ‘Lord, I’m going.’ I knew I was headed in a new direction.”

Graham attended Florida Bible Institute (now Trinity College of Florida), and later, Wheaton College in suburban Chicago, where he met fellow student Ruth McCue Bell, the daughter of medical missionaries in China. The couple graduated and married in the summer of 1943. Happily married for 64 years until Ruth’s death in 2007, they had five children.

After two years of travelling as a speaker for the Youth for Christ organisation, Billy Graham held his first official evangelistic Crusade in 1947; but it was his 1949 Los Angeles Crusade that captured the nation’s attention. Originally scheduled to run for three weeks, the “tent meetings” were extended for a total of eight weeks as hundreds of thousands gathered to hear Graham’s messages.

On the heels of this campaign, Graham started the Billy Graham Evangelistic Association, which was incorporated in 1950. The Charlotte-based organisation has been led by Graham’s son, Franklin, since 2000.

When asked to give an opinion on moral issues, Graham always responded with “The Bible says…” to make it clear that his views were irrelevant.

Graham wrote 34 books, including his memoir, ‘Just As I Am’ (Harper Collins, 1997), which remained on The New York Times bestseller list for 18 weeks.

In 1996, Graham and his wife, Ruth, received the Congressional Gold Medal, the highest award Congress can bestow on a private citizen. He was also listed by Gallup as one of the “Ten Most Admired Men” 61 times. Graham was cited by the George Washington Carver Memorial Institute for his contributions to race relations and by the Anti-Defamation League of the B’nai B’rith.

His grave will carry the simple inscription ‘Preacher of the Gospel of the Lord Jesus Christ’.

“There were a few times when I thought I was dying, and I saw my whole life come before me…” said Graham at his Cincinnati Crusade on 24 June, 2002. “I didn’t say to the Lord, ‘I’m a preacher, and I’ve preached to many people.’ I said, ‘Oh Lord, I’m a sinner, and I still need your forgiveness. I still need the cross.’ And I asked the Lord to give me peace in my heart, and he did – a wonderful peace that hasn’t left me.”