Dancing to a different tune

Sarah Holloway is a member of the Ignite! fellowship of Christians in business and the workplace who meet every month in Horsham. In past issues we have featured her work as Senior Assistant Producer of the topical campaigning film ‘A Dark Reflection’. Sarah is also a college teacher of media and film and a trained dancer who found herself performing in front of royalty. But just one year earlier she had been isolated and alone, unable to shake off her inner turmoil

In 1987 I was a new Christian and had almost completed my four-year contemporary dance training at Laban College (formerly adjoined to Goldsmiths University in New Cross). 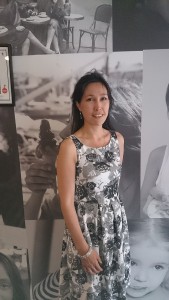 While I was there someone told me about a dance workshop in London, being led by a Christian company, called ‘Springs’. Having never heard of any professional Christian dance before, I decided to book myself up. Being surrounded with other trained dancers who had a heart for God and a passion to use their gift to communicate the Gospel was a wonderful experience. And I could never have anticipated that at the end of the day, I would be invited to tour with the company – the workshop had become my audition!

As the rest of the group were performing elsewhere, I was asked to work alongside two other dancers on a tour to Sweden just a few months later. Little did I realise my debut performance would be part of a national 100-year celebration in Jönköping with a variety of national and international performers. In an indoor stadium that seated several thousand, I performed with two other members as ‘Springs’ Dance Company before King Carl and Queen Sylvia of Sweden, who sat on the front row. The entire event was televised and broadcast to the nation.

A few years later, as I grew in my faith and understanding of God, I was reading my Bible and came across the scripture that proclaims God puts us before kings. I was in awe as I read Proverbs 22:29: “Do you see someone skilled in their work? They will serve before kings; they will not serve before officials of low rank.” (NIV)

Just one year earlier, I was a completely different person. Throughout the summer break I spent most days sitting alone in a corner chair at home, sucking my thumb, while rocking back and forth.

I felt completely alienated from everyone around me, unable to make sense of my life, and I sank deep into myself. My life thus far had led me to believe I was a victim of my circumstances, which were beyond my control. Unlike most testimonies I have heard from people who were drawn into a life of sin, I wasn’t doing any of the things many expect from a teenage lifestyle.

Most of my friends had moved away to university and I had little in common with the other students at dance college. Most were older than me, living in student accommodation, and partying hard. As the youngest in the year group, I was still living at home, but unable to communicate the inner turmoil I felt with my mum, who was at a loss how to help. She did what any Christian mother should – she prayed.

Her prayers were rewarded and the Holy Spirit broke through into my life. Suddenly, I found purpose. Finally, everything seemed to make sense and the confusion gave way to hope. From a quiet shy person who found escapism through dance, I emerged like a butterfly finally escaping from the confines of my chrysalis. God revealed himself, so that I became alive for the first time. I felt as if I had just taken off the sunglasses that I never realised I wore.

Psalm 119:46 says: “I will speak of your statues before kings and will not be put to shame”, so as I stood on the stage in 1987, I had the privileged opportunity of bringing my testimony before the King and Queen of Sweden.

My interpreter was a famous Swedish television personality who stood beside me as I spoke to the audience. He interpreted each sentence, as I found myself in the flow of the Holy Spirit.

Suddenly the entire stadium erupted in laughter, and sniggers could be seen from the front row. I was completely bemused, but continued, confidently, if not confused. It was not until later, that I found out what the audience had found so amusing. Unbeknown to me the interpreter was renowned as an outspoken atheist, and I had just got him to repeat after me, “I believe that Jesus is Lord”. God certainly moves in mysterious ways!

Roger Greene leads the Ignite! group of Christians in business and the workplace – they hold breakfast and regular prayer meetings every month in Horsham to pray and encourage one another in their everyday work and business. If you’re interested in joining them, please contact Roger on roger@tricordant.com

The grandparents returning to an African hospital