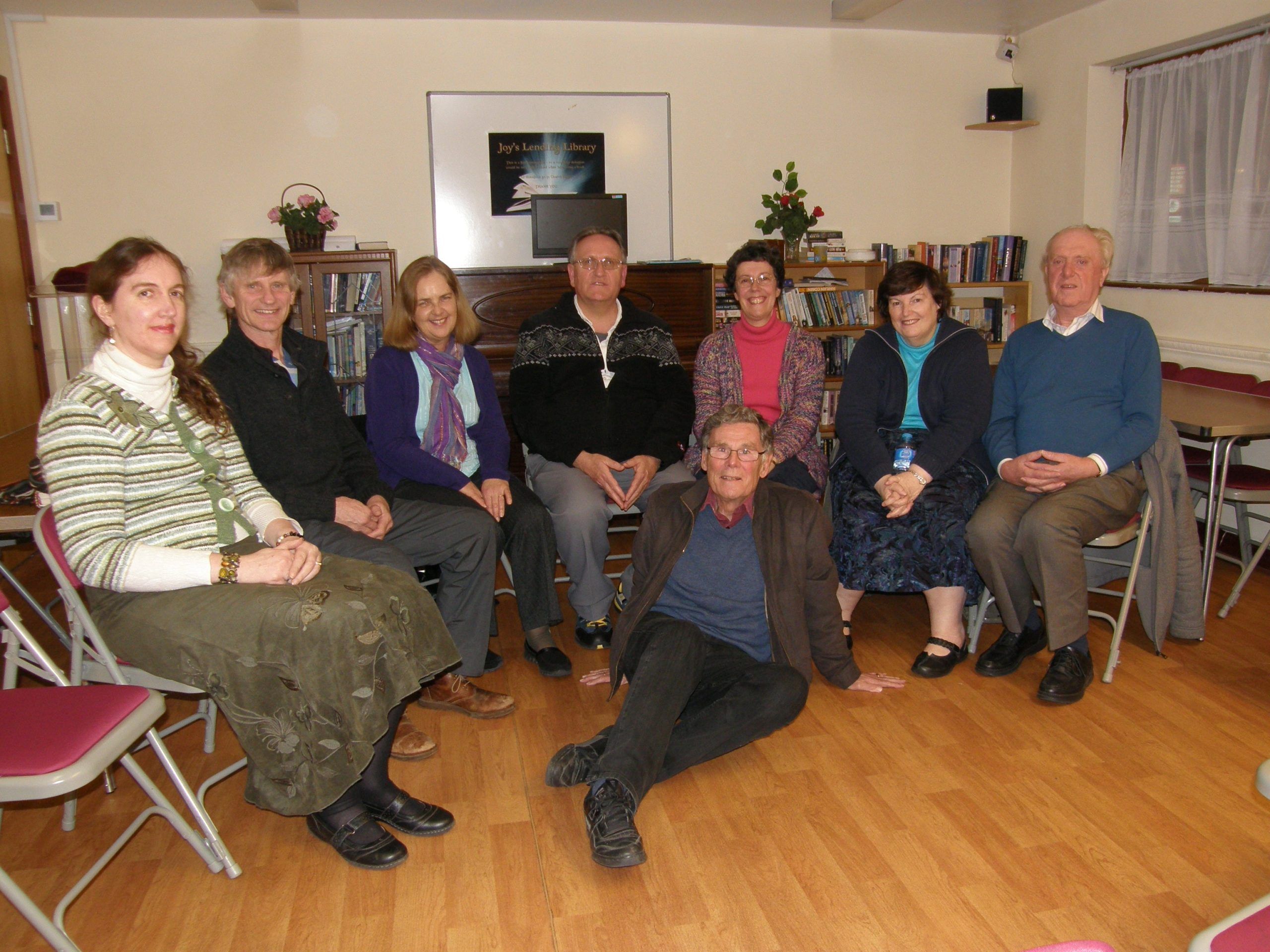 One of God’s SWAT teams – left to right: Sara, Mark, Vanessa, Andy, Rosie, Eve and Paul. Rodney Shotter is sitting on the floor
in the middle

WITH THEIR BEATIFIC SMILES AND SENSIBLE SHOES, YOU WOULD BE FORGIVEN FOR THINKING THAT THIS GROUP OF MIDDLE-AGED CHURCHGOERS IS HARMLESS.

And you would be so wrong. In fact, they are one of God’s spiritual SWAT teams, keen to right wrongs inflicted on their fellow man by the powers of darkness.

SWAT stands for Special Weapons and Tactics, which is just what these good folk employ. They belong to Brighton’s Bethesda Healing Rooms, one of 100 across Britain and 1,000 worldwide.

“Healing Rooms are a safe place where you can come for prayer to experience God’s love and healing in confidence, whatever your faith or need. Here you will find a listening ear, a prayer of faith and a healing touch,” says Dr Rodney Shotter, who started Bethesda three years ago.

A doctor of biology, he combines the Healing Rooms with the Healing on the Streets initiative, so as well as manning a regular spot in George Street, Brighton, his team can pitch up at car boot sales and festivals. In May they were at the Brighton Festival. “We go where we’re allowed,” Rodney explains.

His team of volunteers are trained in the healing ministry and come from several different churches. There is no charge, Rodney says, since “the price has been paid”, and quotes Isaiah 53:5: “By his wounds we are healed.”

In future Dr Shotter foresees more volunteers and dedicated full-time facilities so that the Bethesda Healing Rooms can be open every day and continue to take healing into the marketplace, although he says: “For this we need prayer support and resources.”

If you feel called to get involved, email rodneyshotter2@gmail.com.

For the Healing Rooms address and opening times see the Bethesda advert in the Classified section of this newspaper.

A number of individuals have received physical healing, as well as healing of the emotions and the spirit from the healing rooms, and the team have shared some testimonies:

Just recently, I had been experiencing pain in my wrists, hands and forearms that seemed to come without any cause. It was very debilitating and made doing the daily tasks of life difficult.

It was prayed for by the team at the Healing Centre and 98% of the pain disappeared overnight.  I had prayer again the following week and the remaining pain completely disappeared.

I visited the Healing Centre after having a very uncomfortable ear problem for two months, which was affecting my everyday life.  The welcome I received was great, it was so warm and kind.

We started off with a quick chat which put me at ease immediately.  I described my issue, and they listened carefully, then began to pray over me.  I felt so calm and peaceful, and really felt a connection with God.  Since this time I have noticed significant improvement in my ear.  Although not fully healed it is much better.

I went to the Healing Rooms Centre with my wife as I’ve had a bad back and a cough for over a year.

I described my problems to the team who were really understanding and friendly.  They prayed for me and one team member had a vision regarding my illness and how to remove it.

They didn’t just say “Right, that’s done”, and move on, they described the vision and what it means.  I am now doing what was recommended and am seeing an improvement in my cough.  They then prayed for my back, and immediately I felt the discs were better!

I also had a problem with my sciatic nerve, which was probably due to the lower back putting pressure on it.  Now the back issue is healed, I expect the nerve to repair and get better, but if not I’ll be back for more!  Just give it a try, you have nothing to lose and everything to gain!

J’s  story: Desperate until she met the Comforter

My marriage was breaking up, my heart was breaking, I needed help, I was desperate. When I visited the Healing Rooms Centre and received prayer, I immediately felt the presence of the Holy Spirit. I was no longer alone and I knew it.

I’m sure I’m not the only woman who tries to soldier on when she is ill, not wanting to let people down and convincing herself that ‘it’ will pass. In my case it was migraine.

For over 35 years I had suffered varying degrees of the debilitating illness, it could last for four to seven days at a time.  During the past few years the attacks had become more frequent.  I was on medication from the doctor but nothing seemed to work.

Last summer, on holiday in the Mediterranean, four days of my fortnight were stolen by my illness. It was around this time that my dear friend spoke with me about the Healing Rooms Centre, so one Thursday evening I visited it – after all I had nothing to lose….

How wrong I was…I lost what had plagued me for over 35 years and every day I thank God for his healing.

C is a receptionist in her 20’s at a Premier Inn Hotel where members of the Healing Rooms team were staying. We discovered that she wanted to be an srtist but couldn’t because of the effect of a tumour on her pituitary gland.

This produces pressure on the region of the brain concerned with eyesight, very much restricting her peripheral vision. We tested this and found it was a very narrow field of vision.

Members of the team prayed for her in the knowledge that Jesus, through the Holy Spirit, would cause the tumour to disappear. We then tested her vision and found that her peripheral vision had returned to normal. She praised Jesus and converted from her Sikh religion to follow him.

The other Sussex Healing Rooms are in Burgess Hill, Crawley and Hastings and we hope to be able to report similar stories of divine healing from across the region. Email heartpublications@gmail.com if you have a proven story of healing to share.