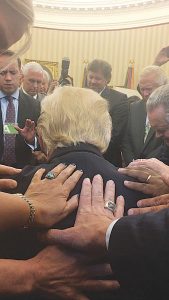 President at prayer: This photo of
evangelical leaders praying for Donald
Trump in the Oval Offce attracted
considerable social media comment.
Johnnie Moore, president of the
KAIROS Company and an attendee of
a prayer meeting, snapped the photo
of evangelical leaders’ hands laid on
President Trump in prayer on 10 July.
Near the front is Vice President Mike
Pence. Evangelicals are said to feel
more welcome in the White House than
with any previous president, including
Ronald Reagan