Powerful prayer and encouraging news from the Christian Embassy

“If anything is going to happen on earth, it has to be spoken…”

This was worship leader Steve Carpenter’s reminder as he led a powerful hour of prayer for Israel and the UK Church. 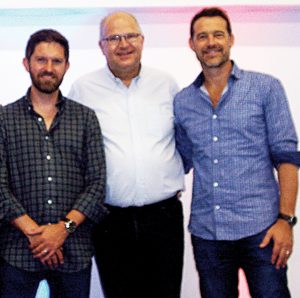 Steve who? Exactly. Since the hugely popular Derek Prince and Lance Lambert (who taught convincingly about Israel) went to their eternal destinations a few years ago, and David Pawson, another crowd-puller, is retired, I’ve been wondering who would emerge to take their places. Well, what with Steve Carpenter, Paul Parkhouse (who spoke about the UK Church’s understanding of Israel in the Bible) and the men in their 40s and 50s already based in the Middle East who will be speaking at September’s CFI (Christian Friends of Israel) conference, I’m very encouraged.

Until 15 years ago, though, Steve had no idea that God viewed Israel as anything other than one nation among many. Jesus died for everyone, right? God has no favourites – tick.

In 2003 he was happily pastoring in Seattle when his wife had Isaiah 19 strongly impressed on her one night. Steve responded: “Honey, I haven’t a clue about this. Let’s just set aside 40 days to pray and ask God about it.”

Two weeks later, the US invaded Iraq (the modern state of Assyria), so their prayers became more fervent and they grasped that Isaiah’s ‘highway’ linking Assyria, Israel and Egypt was a spiritual openness between these nations (Isaiah 19:23-25).

Visiting Jerusalem’s Western Wall, God challenged Steve about how he felt about his own oldest child, and the penny dropped. He felt God say, “I don’t love Israel more than I love Iraq, or the US more than the UK, but among my children of nations, I also have a first born…”

The Carpenter family relocated to Jerusalem in 2007; as well as helping lead worship and prayer, Steve has started the H19 (Highway 19, named after the Isaiah 19 passage) Shoe Project Syria, through which the IDF (Israel Defence Force) distributes donated shoes to Syrian children.

Prayer had also become a priority for Dr Jürgen Bühler, director of the International Christian Embassy, Jerusalem (ICEJ). When he arrived in January 2011, God had told him to pray for revival in the Arab world and for the true face of Islam to be unmasked. By the end of the first week of prayer, the ‘Arab spring’ had begun – and soon after the ugly reality of Isis would rear its head.

He appealed for believers to join their new 24/7 prayer initiative launched on 14 May this year (“Our birthday gift to Israel”). Currently they have two time zones covered and Dr Bühler reported that several hundred people have made a commitment to pray between 5-7am daily.

A further answer to prayer was the growth of evangelical, ‘Spirit-filled’ churches in the Middle East. Dr Bühler told us: “We hear testimony after testimony from people who tell us that they’ve had a dream of a man in white with his hands pierced through who hands them a New Testament and tells them to try to get one!”

Apparently there are “hundreds of thousands” of Saudi believers who can now gather openly: “Some churches of 1,000 meet every Sunday.”

A trumpet call to turn back to God