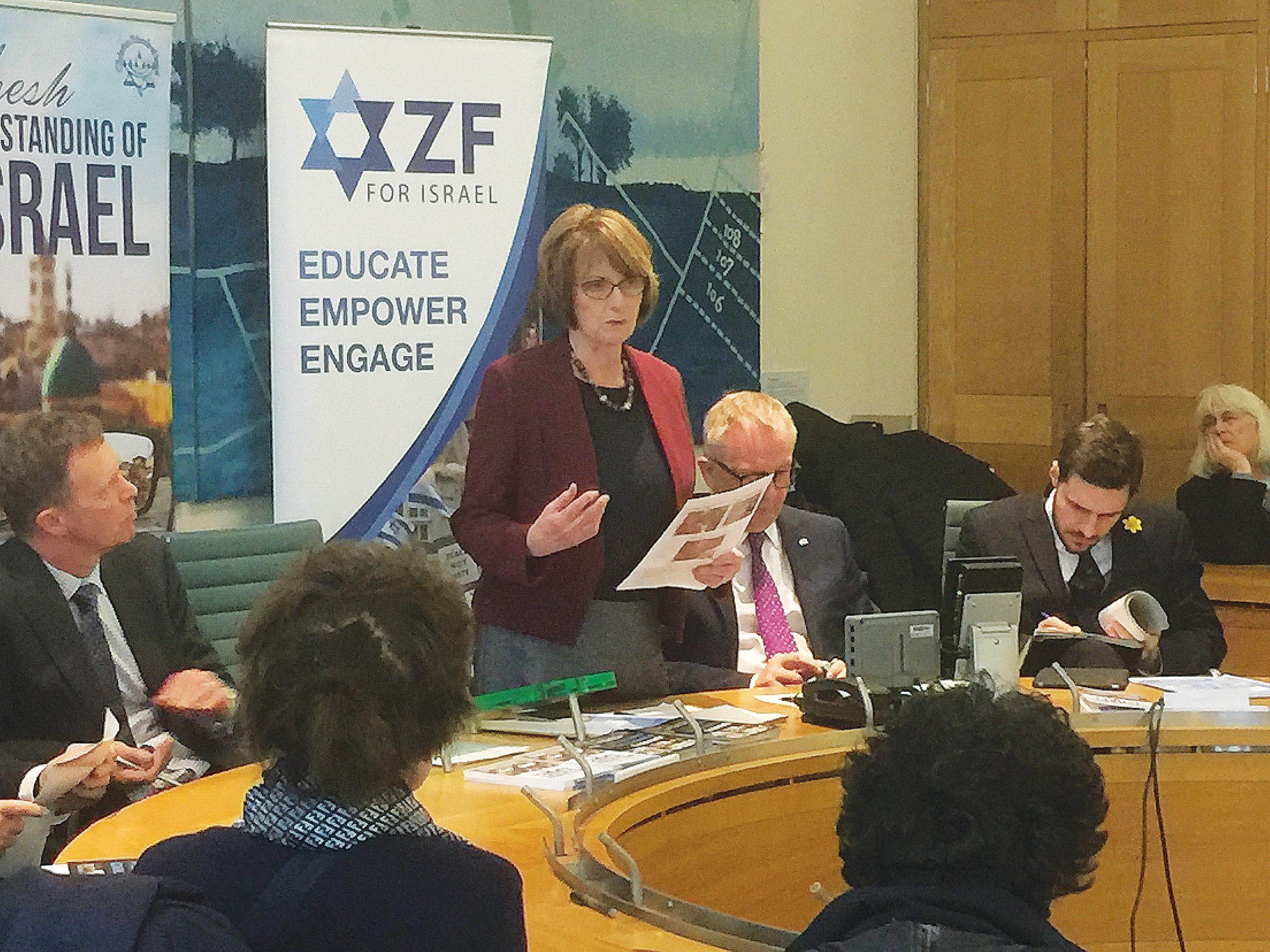 Once again, Christians and Jews came together to be updated and to present their concerns about anti-Semitism and prejudice against Israel to their MPs.

Happily Israel was not at war at the time of the lobby, so this year’s topic was “Israel’s Forgotten Children” – calling for the repatriation of missing soldiers’ and civilians’ remains, which Hamas refuse to return.

The mother of one, Hadar Goldin, spoke via livelink from Israel, with composure but weary resignation. She managed to smile at the end, when she saw the audience at the Emmanuel Centre waving to her and Hadar’s father.

Next we heard from MP Ivan Lewis, who had made the painful decision to quit the Labour party after 35 years. Leaving his Bury North constituency party had been “heartbreaking”, as being a Labour member had been as much a part of his identity as being Jewish. He emphasised that it was due to the Labour leadership’s attitude towards Jewish people and Israel that had caused the split; members of his constituency party “don’t have an anti-Semitic bone in their bodies”.

MPs from all parties addressed the delegates on anti-Semitism, stressing that it has no place in British politics and voicing alarm at Jeremy Corbyn’s failure to quell its appearance in the Labour party. Hence he was not fit to be Prime Minister.

The other common theme was the stringent nature of the Israeli democratic system, which the British MPs felt was a little “too democratic” for their liking.

“I’m a first language Welsh speaker,” said Conservative MP Guto Bebb, a member of the All Party Parliamentary Group on anti-Semitism. “I have heard Arabic being used by Arab MKs in the Israeli Knesset (Parliament), but that is not a privilege that I am afforded in this, the mother of parliaments.”
A Liberal Democrat peerechoed this sentiment by pointing out that the Arab parties in the Knesset form the third largest bloc.

Ian Austin, a Labour MP until recently, pointed out that 1.7 million Arabs in Israel are the only ones in the Middle East who have equal voting rights. He explained that he resigned because of a culture now within the Labour Party of “anti-Semitism, extremism and intolerance”.

Dame Louise Ellman MP (Labour) revealed that the eventual suspension of her former colleague, Kayla Bibby, on charges of anti-Semitism, was initially halted because of an “intervention”. This interference in the complaints process had happened despite very obviously anti-Jewish images which Bibby reposted on her Facebook page.

Despite enduring much abuse from within her own party, brave Dame Louise has chosen not to resign but to continue the fight from within.

She also flagged up her cross-party bill to prevent funding from the British government going to Palestinian Authority schools where hatred of Jews is being taught. She said that “the bill will be published in more detail and the campaign will continue”.

Agreeing with many of the other Labour MPs who spoke, Louise Ellman said that the two sides living in peace is desirable, “but hatred against Jews is something we will not accept”.

Report by HEART staff and a lobby delegate