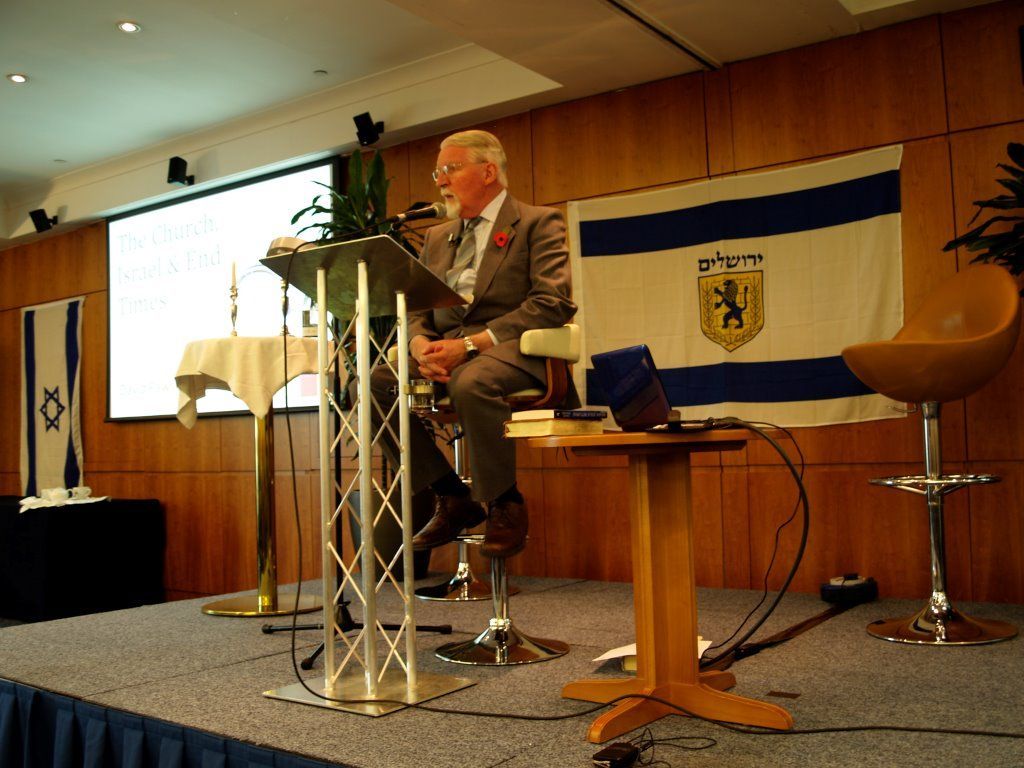 Conference: The Church, Israel and the End Times, hosted by the Emmaus Group, Crawley, 9 November 2013

ON THE ANNIVERSARY OF KRISTALLNACHT, the night of 9 November 1938, when organised violence against Jews broke out in Germany, Howard Stern of the Emmaus Group introduced the conference by saying that the response of the Church had been – a deafening silence.  The next time it comes, he warned, the Christians will be included.

But the special guest, for whom the audience of over 270 had packed out the hired hotel room, was evangelical elder statesman Rev David Pawson.  Now over 80, he addresses his audience sitting comfortably on a special high stool.

Before addressing his three main themes of Israel, the Church and the Church and Israel in the last days, David Pawson turned his attention to the phrase “The end times”, which, he said, is not biblical.  The Bible refers, he said, to “the last days”, which is the interval of time between Jesus’ first and second coming;  “the times”, as given in Daniel (a time, times and half a time); “in that day” and “the end”.  He warned against getting deceived into thinking that “the end times” are here.  The Church needs to get on with its job of winning and discipling all the remaining ethnic people groups.

“Jesus has told us the worst that will happen”

In the condition of the world around us and natural disasters we are witnessing the birth pangs of a new universe and our redemption gets nearer with every bit of bad news, said David.  In Revelation chapters 6-19 Jesus has given a full account of the troubles and tribulation to come.  Jesus has told us the worst that will happen, it will be confined to three and a half years and nothing worse will happen.  We are to watch and pray, to watch the world and what is going on around us.

He asserted the accuracy of biblical prophecy: of 596 Bible predictions, over 80% have now come true.  “I have no idea why people read horoscopes – they are only 5% right!  Now there is a ‘science of futurology’ with chairs at universities whose predictions are only 25% accurate, whereas the Bible has been 100% accurate so far!”

Israel “in that day”

God has promised that all Israel will return; they will be settled in the land forever, never again to be uprooted.  As yet about half the Jewish people have gone back but the remainder are around the world and only a third of the land promised to them has been returned.

Israel will be attacked in Jacob’s trouble, which, David says, has not happened yet.  An international army under the UN banner will besiege Jerusalem, looting and raping the women, and half the population will go into exile. But God will protect the twelve tribes and will see that they come through this.  Israel will be deceived into a covenant with the Antichrist for seven years of peace, but after three and half years it will be apparent that she has been deceived.

Yet “all Israel will be saved”.  Israel, claimed David, is the only nation that God has promised will see revival as a whole people, and he believes it will be a gathering of the whole nation with representatives of every part.  Then Israel will tell the world about Jesus.

What will happen to the Church?

David believes the Church is coming back full circle to the way it was in the Roman Empire: persecuted, and consisting of both Jewish and Gentile believers.

Jesus will get the Church he died for, not just a certain quantity, but a certain quality.  We must deliberately take the Gospel to every known people group.  “He wants this done before he gets back,” David challenged.

“Better get ready for big trouble”

David believes that much of the Church has fallen for the view that they will be taken out world (“raptured”) before the tribulation, which, he says, is a deductive position (deduced from scripture), arrived at by reason.  “Much of the Church believes in escapology rather than eschatology!”

He takes the inductive approach where scripture must state clearly what will happen and he does not believe that there is a clear statement of this in the New Testament.  “If we are not going to go through the tribulation, why is there so much detail about it in the Bible?”

Quoting from Dutch Resistance heroine Corrie Ten Boom following her visit to China, he stressed that there is a need to tell people how to be strong, to stand and not faint when trouble comes, to train for tribulation, pointing out that she wrote down and learned scriptures for the troubles ahead.  “Letting people believe that they will escape the trials of the tribulation is deception which will leave them unprepared,” he said.

The Church and Israel

David outlined two extreme views, the first, that the Church has replaced Israel in God’s affection and plans, the second that Israel will replace the Church after the rapture.  David, however, considers that the destinies of the Church and Israel are the same.

The Church has a debt to Israel that it can never repay; our whole faith and beliefs come from the Jews.  We owe our salvation to a Jew, Jesus, who always will be a Jew.  We depend on Israel because we are drawn from Jewish roots.

The Church in danger of cursing Israel

The Church in this country needs to be very careful, warned David, as its greatest danger lies in cursing Israel and leaving itself open to the curse of God.

“So many have cursed the Jews and paid for it” said David.  “History is littered with examples of fallen nations and empires who have turned their backs on the Jewish people, from Egypt through Rome to the British Empire.  “We washed our hands of Israel and lost in five years everything except a few small islands,” he explained.

Our duty is to undo the damage of 2,000 years of anti-semitic cruelty and to stand with Israel whatever the cost, to suffer with her and share the good things God has given us.

“We are heading for a Jewish city”

According to the book of Revelation, we will be one flock with one shepherd and the heavenly city will come down from heaven covered in Jewish names, of the twelve tribes and the apostles.  “We are heading for a Jewish city through and through,” claimed David.

The miraculous journey of a perpetrator’s son

David was followed by Pastor Werner (pronounced Verner) Oder, brought up in Austria, the son of a member of the SS.  Both his father and his neighbourhood were fanatical Nazis.

Werner wanted us to know that despite the fact that Austria presented itself to the world as a victim on the collapse of the Third Reich, its people were in fact perpetrators and many commanders of concentration camps were Austrian.

Werner described his journey of torment from demonised boy, due to the spiritual inheritance from his father, to miraculous faith.

“What kind of Christians are we going to be during Jacob’s trouble?” asked Werner.  “Be strong and very courageous – not afraid, not intimidated, stand up and speak for Jews and never stand down.”

$25 billion and holes in the road

Then we heard from Christy, a lovely young Palestinian Christian and her friend Natalie, who spoke to us bravely on-line from Bethlehem to describe the harassment she receives from fellow Palestinians and that she has to spend half her salary on taxis for her security.  Christy described the Palestinian leadership as failed.  A place the size of Hampshire, it has received $25 billion in aid since 1994, yet there is no infrastructure, roads and schools are very poor and there is currently no petrol.   And it has just come to light that there is a £2.7 billion black hole in the Palestinian Authority’s finances, to which Britain contributes £80 million a year.

Finally we met Ismail Khaldi, brought up a Muslim in his Bedouin community in northern Israel (they had no running water in their tent till he was eight), yet who benefitted from an Israeli education to become an Israeli diplomat and currently serves as Counsellor of Civil Society Affairs in London.

After writing his autobiography, he had been invited to speak at Edinburgh University.  On arriving there was a terrible din of people shouting abuse and near obscenities.  We watched horrified as a clip from YouTube revealed about 25 people, incited by activist Mick Napier, screaming and yelling abuse at this man, whose culture is built on respect and hospitality.  The meeting was abandoned.  I was deeply ashamed that my former university and my country had sunk to this.

But it gets worse.  A trade union representative refused to meet with him and the Deputy Ambassador was very badly treated at Exeter University.

“Can you imagine that happening to a British diplomat in Tel Aviv?” he asked.  “The trade unions in this country won’t speak to the Israeli ones, but Israeli and Palestinian trade unions speak together all the time.”

Ismail’s job is to open up communication at a grassroots level, but he was told in a letter by a British trade unionist: “I can’t meet with you until your country has solved the problem with the Palestinians.”

Ismail likened this snub to his nation refusing to meet a British trade union until our problem over the Falklands was solved.  He has also been active in rallying support for the Ecostream shop in Brighton, the target of demonstrations by local activists, which nonetheless provides a livelihood for Arab and Jewish workers.  “I’m here to work with you for justice for Israel – and for the Palestinians, of course – but there’s a way to do that.”

Fitting food for thought on the anniversary of Kristallnacht.